Goutam Das
Six months ago, Flipkart, India's largest online retailer with 2.6 million users and daily revenues of Rs 2.5 crore, embarked on a search for something critical to its future: a chief financial officer. The site, which went live in 2007, never had one. One applicant interviewed by cofounders Sachin Bansal and Binny Bansal was the CFO of an IT company. The three-hour interview covered valuations, technology, Amazon, market reach, and a NASDAQ listing.

"Our meeting ended with one of the founders saying they don't want to be curtailed right now," says the CFO, who does not want to be named. "I tried to talk about streamlining finances, but I don't think profitability figures in their scheme of things." He never heard back. 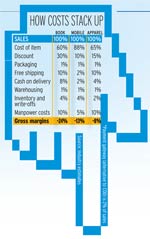 Click here to Enlarge
In January 2012, Flipkart hired former Sapient Corporation executive Karandeep Singh as CFO. Flipkart's customer base increased 10 times in the past year. It ended 2011/12 with a top line of Rs 500 crore, and expects that figure to grow by four times in the current year. The company and its associates are losing money: according to three people with knowledge of its operations, losses are at least Rs 6 crore a month. Flipkart's filings with the Registrar of Companies say it lost Rs 91.27 lakh in 2009/10 and Rs 1.37 lakh in 2008/09. The increase in losses since 2009/10 is due to the cost of customer acquisition. E-retail industry executives say the cost of acquiring each new customer - expenses include advertising and search engine optimisation, which improves visibility in search results - is Rs 800 to Rs 1,500. By contrast, the average price of a book is Rs 300.

So are the Bansals and their backers complete nutcases? The answer may not be obvious to outsiders, but those familiar with Flipkart's financials - including venture capitalists who funded it - say there is a method to their madness. The company has started tinkering with profitability - a discount tweak here, a slight price increase there. There is no free shipping for orders below Rs 200, for instance.

Flipkart did not talk to Business Today, nor did it confirm the Rs 6 crore-a-month loss. But a spokesperson clarified in an e-mail that the company was operationally not profitable because it is investing heavily in technology and the supply chain. The e-mail said: "Currently, Flipkart is making a profit at a per transaction level. If we stop investing, we can become profitable in a day but our aim is to grow and become India's largest retailer." The spokesperson said it is necessary to expand business to realise the potential of e-commerce in India.

Financial services provider Avendus Group expects Indian e-commerce to grow to Rs 107,800 crore ($24 billion) by 2015 from Rs 28,500 crore in 2011. Currently, eight million to 10 million people transact online in India. That number is expected to be 38 million by 2015. China and the United States are bigger - according to Boston Consulting Group, China has 145 million online shoppers, and the US has 170 million - but India's potential is undeniable. Flipkart co-founders Sachin Bansal (left) and Binny Bansal
Flipkart is hardly alone in its profitability dilemma. All online retailers in India have been sucked into the race for more customers and top-line growth. Concentrating on profits will mean slowing down on these two fronts.

In the last 15 months, online fashion retailer Myntra has doubled revenues every four to five months. To double them again, it must build capacity in terms of people, warehouses, and stocks. By reducing marketing expenses, it expects to become profitable by October 2013. It has cut the cost of customer acquisition from Rs 1,300 in March 2011 to Rs 400 now, says CEO Mukesh Bansal. "It's our secret sauce. We have a deep understanding of online consumers." Myntra does not discount much. Margins are higher in fashion retail than on books or mobile phones. Online fashion brand Yepme, too, expects a net profit by November 2013 - faster than a seller of books or electronics could do.

For those who discount - which means most Indian e-retailers - the path to profitability is lined with thorns. Executives connected to the e-commerce industry say most companies are not profitable at even the gross margin level, going by international accounting standards. Discounts, free shipping and cash on delivery (COD) eat into profits. Free shipping for books and apparel adds up to 10 per cent of revenues. COD, necessary because not all customers pay by credit card, can eat up as much as eight per cent of the top line. "COD adds Rs 50 to Rs 100 to costs, and 60 per cent of Indians pay this way," says Aashish Bhinde, Executive Director, Avendus. "That can be brought down to 20 per cent if things like mobile payment work out."

Gross margins for an online book seller are estimated at minus 24 per cent. At the operating level, companies are being bruised by marketing costs. A burst of television advertising could cost more than Rs 15 crore. 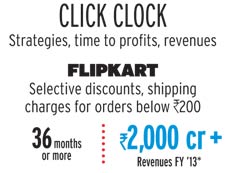 Click here to Enlarge
K. Vaitheeswaran, founder of online retailer Indiaplaza, is a doughty fighter whose venture survived the dotcom bust of 2000/01 but has now fallen behind, at least going by the top line. Vaitheeswaran, who says few of today's e-retailers will survive, stopped offering COD because he reckons the model will never make money.

Indiaplaza has no warehouse - goods are sourced when ordered. This may be cost-efficient, but could lead to delays and unhappy customers. For example, Radha Radhakrishnan has done 20 transactions on Flipkart in the past year, and only two at Indiaplaza. "Flipkart delivers books in 24 hours," says Radhakrishnan, head of operations at Ankur Healthcare, a hospital chain in South India. "I recently ordered a book from Indiaplaza, and it took them three days to deliver."

The number of repeat transactions is becoming a keenly watched metric to gauge how soon an ecommerce company can make a profit. "Given the cost of customer acquisition, a customer must transact more than three or four times to make the company profitable," says T.C. Meenakshisundaram, Founder and Managing Director of IDG Ventures India, a venture capital fund. The likes of Flipkart, Myntra and Yepme are confident about profitability because customers do return. Flipkart says 70 per cent of them come back.

But there is no guarantee of that. What if a rival offers better discounts? Uread, founded in March 2011, and owned by Delhi distributor Prakash Books, says its procurement costs are 10 to 15 per cent lower than those of rivals. "We pass the benefit on to the customer," says Uread co-founder Gaurav Sabharwal. For example, Flipkart offers a 14 per cent discount on Jeffrey Eugenides's The Marriage Plot, while Uread offers 26 per cent.

Subrata Mitra, Partner at Accel Partners, who is on the boards of Flipkart and Myntra, says companies could take up to five years to show profits. Amazon, the world's biggest online retailer, started in 1995 but became profitable only in 2001. The road to profitability, then, is long.