Violence at Manesar was a criminal act: Osamu Suzuki

Suzuki Motor Corp Chairman Osamu Suzuki in an exclusive interview with Business Today Editor-in-Chief Aroon Purie and Editor Chaitanya Kalbag says the Manesar trouble has led to the tarnishing of Suzuki Motor Corp worldwide, and pulled down the image of Maruti Suzuki in India.

Osamu Suzuki, Chairman of Suzuki Motor Corp
Aroon Purie / Chaitanya Kalbag
Simmering unrest among contract workers at the Manesar (Haryana) plant of Maruti Suzuki exploded in violence and arson on July 18; one HR executive died, and 96 employees were injured. Suzuki Motor Corp Chairman Osamu Suzuki made a point of visiting Manesar and meeting every injured worker during a week-long trip just after the locked-out plant reopened on August 21.

Labour unrest is just one of the problems India's No. 1 carmaker faces. In April-July this year, Maruti's share of the domestic passenger vehicle market fell to 38.6 per cent, the lowest in a decade. In 2000, the figure stood at 55.5 per cent. Maruti's finances are not looking good: operating profit margin has fallen from 12.74 per cent in 2009/10 to 8.05 per cent. Return on capital employed has halved from nearly 28 per cent to 13.5 per cent. Return on net worth has similarly declined from more than 21 per cent to under 11 per cent.

The 82-year-old Suzuki, looking calm and relaxed in shirt-sleeves, showed a surprising grasp of numbers and detail when he sat down with Editor in Chief Aroon Purie and Editor Chaitanya Kalbag for an exclusive interview in a New Delhi hotel room. Excerpts:

On the Manesar unrest
This trouble has led to the tarnishing of Suzuki Motor Corp worldwide, and pulled down the image of Maruti Suzuki in India. This incident happened on July 18; today is August 29. More than one month has passed. Many people have been arrested, but I cannot believe that the reason for the incident is not yet clear. The rumours are that these people (the attackers) would be put in jail for a week or 10 days and then be released and then they would be heroes or stars. That was what they were thinking. Already, all those who indulged in this violence - there were 546 people - have been identified and they have been terminated. They must have wanted to extract money from Maruti Suzuki, but we have decided that we will not give them a single penny.

I think the way the (Maruti) union has taken up its dispute with the management is not at all correct. I don't consider this a union-management labour issue; I term it as a criminal act, and, of course, it shocked me.

From 1945, when Japan lost in World War II, until 1960, we also had labour troubles. So I have also experienced labour problems (in Japan). The timing may be different but each country goes through labour trouble in its own time.

FROM THE MAGAZINE: Why Maruti will not leave Manesar

On whether Manesar has changed his, or Japanese investors', view of India
There is no change in my thinking. It is 30 years since we established Maruti Suzuki. Although I am Japanese, born and brought up in Japan, I consider India my second home. Mrs Indira Gandhi was interested in manufacturing small cars; at that time our views matched. I think Maruti is part of the Suzuki family. [During my trip] I met the Gujarat Chief Minister (Narendra Modi) and I also met the Haryana Chief Minister (Bhupinder Singh Hooda). I clearly mentioned to both of them that Haryana is my first home and Gujarat is my second home. (Maruti Suzuki plans to set up a 250,000 car plant on a 700-acre site in Gujarat by 2015/16.) 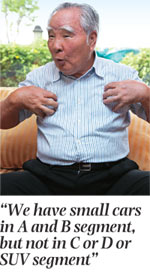 On whether Maruti Suzuki will end the system of contract workers at its plants in India
No, it is not so. In Japan as well, we have the system of contract employees. So the ratio of the permanent employees there is 65 to 70 per cent and 35 to 30 per cent are contract workers. So whatever manpower is provided through the contractor in Japan, Suzuki Motor is directly screening, checking those people. [In Japan] we have all the history and antecedents of employees like we know their educational qualification, their career history and also have their home address and also know their names… we are also checking their police or criminal histories. But here, whoever the contractors bring has been working without any conditions. In Thailand and Indonesia, at our factories, contract workers have to sign an oath that they will be fired if they do not work properly or violate company rules. So, I think, we would strictly implement these systems and Maruti Suzuki will also do the supervision. In India the ratio of contract workers to regular workers is 50:50. In Japan it is about 30:70. Therefore, we want to change the ratio here to that in Japan.

On Maruti's declining market share
Yes, I am worried about the market share. But in North America or Europe, no single carmaker has a market share of 55 per cent, 50 per cent, or 40 per cent... [it] is impossible. In India, at least 20 global carmakers are present. Because Suzuki Motor was the first to penetrate the Indian market, we will make our best effort to maintain this 40 per cent market share.

In Japan, Toyota is No.1. And if you are a carmaker you need to have the full line, from small to the bigger cars. However, Toyota does not manufacture the small 660 cc cars. And globally, one-third of the car market happens to be for small cars. So although it is Toyota, they are not able to get 30 per cent market share. The same goes for GM, or Volkswagen, or Fiat.

On whether Maruti Suzuki misread the diesel market in India and entered that segment too late
Suzuki has small cars. We have small cars in the A and B segment. But we do not have cars in the C or D segment, or the SUV segment. In case we have to sustain market share, then it is a must for us to have the full line. Of the past 30 years (since Maruti started in India), for 20 years, 80 to 90 per cent was small cars. As India's GDP grew and income levels increased, the ratio of customers who could buy bigger vehicles also increased. You start selling small cars, the economy grows, and people shift from small cars to bigger cars. As you rightly point out, Suzuki Motor was not manufacturing diesel vehicles. So our penetration into the diesel market got delayed. The timing of diesel to petrol cars also was brought forward because of pricing policies. We could not also (correctly) read the government's policies on the gap in pricing of petrol and diesel so that at some point diesel prices would rise and the gap would narrow.

On Maruti Suzuki's declining profit margins (Maruti Suzuki contributes 30 per cent of Suzuki Motor's pretax profits)
The royalty issue is also there. And one more problem is of exchange rate. For example, the Fiat diesel engine, Japan Suzuki (Suzuki Motor) introduced the technology. And we transferred this technology to Maruti. So Japan Suzuki is now paying a royalty to Fiat. And Maruti is paying royalty to SMC, Japan… there is one more major issue (and that) is exchange rates. Twenty years back, it was a very win-win situation. So, if we see only the situation which prevailed 20 years back, I think it won't be correct because what I see is the total. So like 20 years back Japan Suzuki invested more than 30 per cent in Maruti… This point is not to be missed out.

On what keeps him going
Work, work, work… [Laughs] from hotel to Manesar three hours… then four hours going around the plant, then three hours back to the hotel… I made lots of observations for cost reduction during the plant audit.