(From L-R) Ajay Piramal, Chairman, Piramal Group; Ratan Tata, Chairman, Tata Group; and Ravi Chawla, CEO (Lubricants Division), Gulf Oil Corporation
Manu Kaushik
On November 23, Tata Steel announced it would cut 900 jobs in the United Kingdom and shut 12 sites as part of a restructuring exercise aimed at sustaining its European operations. The news did not come as a surprise. India's largest steelmaker has been struggling in Europe due to tepid demand and a weak economy ever since it acquired the Anglo-Dutch steel company Corus in a $12.9 billion deal in early 2007. In fact, losses at Tata Steel's European operations have often been offset by the profits made in India.

The Corus deal is not the only instance where an overseas acquisition did not turn out as beneficial for the Indian acquirer as was envisaged initially. Other such examples are Shree Renuka Sugars's takeover of mills in Brazil, Suzlon Energy's acquisition of German wind-turbine maker REpower, and the purchase of Imperial Energy by state-run Oil & Natural Gas Corporation. We expect DRG to grow at a compound annual rate of 15 per cent over the next five years: Ajay Piramal
Yet Indian companies remain hungry for foreign assets. They have announced 77 foreign acquisitions so far this year, according to Grant Thornton India, The biggest is Gulf Oil Corporation's $1.05 billion takeover of the US-based Houghton International. This is followed by Rain Commodities's m702 million ($915 million) buyout of Belgian chemicals maker Rutgers NV and Piramal Enterprises's purchase of Decision Resources Group (DRG) of the US for $635 million.

Besides, Tata Group's Indian Hotels in October made a $1.86 billion offer for the US-listed hospitality chain Orient-Express Hotels and ONGC Videsh in late November agreed to buy an 8.4 per cent stake in a Kazakh oil field for $5 billion. But, here's the rub: most of these deals could turn out to be duds, say analysts.

High Valuations
The acquisitions did not come cheap. Rain, a Hyderabad-based maker of calcined petroleum coke (CPC), paid more than seven times Rutgers's operating profit. Rutgers posted revenue of m831 million in calendar year 2011 with an operating margin of about 12 per cent. "The valuation (of Rutgers) is around 30 per cent higher than the value of its closest competitor, Koppers Holdings (of the US)," says Rohit Agarwal, analyst at SPA Securities.

Rain, however, defends the deal price. "Each person has his own perception of a particular business," says T. Srinivasa Rao, Chief Financial Officer (CFO) at Rain.

"Because of high crude prices, there's not much M&A (mergers and acquisitions) activity happening in the oil and gas sector. It's likely that some companies get expensive valuation," says Abhijit Bora, analyst at IFCI Financial Services. 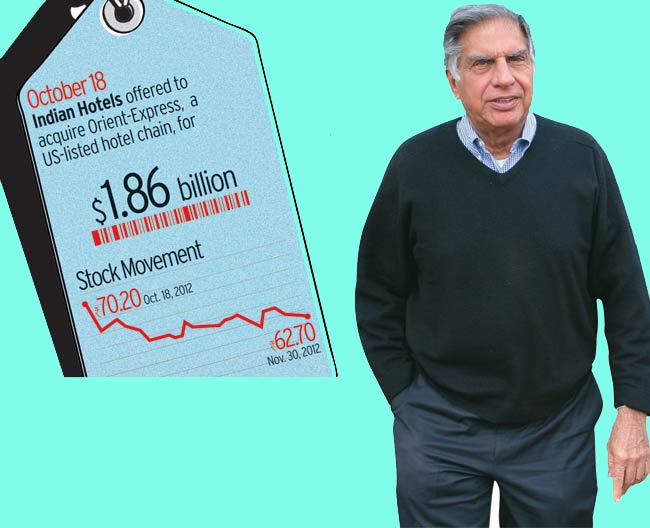 Ratan Tata, Chairman, Indian Hotels
Piramal Enterprises has not disclosed the operating margin for DRG. The research and advisory firm sells proprietary information to help customers make business decisions in the health-care sector. The drug maker has hinted that industry margins were in a range of 15 to 30 per cent. It projects DRG's revenue at $160 million for 2012. This means Piramal paid 12 to 18 times DRG's operating profit. "That's a reasonably high valuation. The payback period will be much longer in this case," says Manoj Garg, Vice President at Edelweiss Capital.

Piramal Chairman Ajay Piramal says, however, that companies in the information management business are highly valued due to their subscription-based revenue model, low price sensitivity and low competition. "We expect DRG to grow at a compound annual rate of 15 per cent over the next five years."

For Piramal, the deal price may not be an immediate concern as it is cash-rich after it sold its generics business to Abbott Laboratories for $ 3.7 billion in 2010. But Rain and Gulf Oil are depending on borrowings to finance the deals. Gulf Oil has not disclosed the amount it plans to borrow. Analysts are also sceptical about Indian Hotels's plan. Though Orient rejected the offer in November saying it was too low, the Ratan Tata-led hospitality company is unlikely to give up easily. Rashesh Shah of ICICI Securities said in a note that the deal, if it goes through, would put a strain on the profitability of Indian Hotels. "The deal will create value for shareholders (but) not before 10 years," he told Business Today. Email queries to Indian Hotels remained unanswered till the time of going to press.

Growth concerns
Gulf Oil is betting on a company that is in the middle of a slowdown. Roughly 70 per cent of Houghton's revenue comes from Europe and North America. According to global consultancy Kline & Co, the metalworking fluids market in North America and Europe shrank between 2007 and 2010. The two markets are likely to grow at a dismal two per cent and one per cent, respectively, till 2015. The Asia market is expected to grow around five per cent.

Gulf Oil expects Houghton to grow five per cent annually over the next few years. "While North America and Europe are important markets for us, Houghton will focus more on Asia," says Ravi Chawla, CEO (Lubricants Division), Gulf Oil.

The other challenge is that more than half the global industrial lubricants market is controlled by smaller brands. Large players like Houghton (12 per cent market share), Quaker Chemical (10 per cent) and Henkel (seven per cent) serve the rest. Houghton will either have to cut prices or buy rivals to raise market share, says IFCI's Bora. "While a price cut would affect profitability, any acquisition would put a strain on the balance sheet," he adds.

Rain faces similar problems. Coal tar pitch and CPC are key ingredients in making aluminium. Demand for both products depends on the aluminium sector. According to the Australia-based Bureau of Resource Energy and Economics, global aluminium consumption between 2008 and 2011 grew at a compound annual rate of 4.6 per cent. This has affected Rutgers, whose revenue rose only about six per cent annually over the past four years.

"Rain Commodities has taken a gamble. It's a new area for them," says Sanjay Jain, analyst at Motilal Oswal Securities. "The past record gives some confidence, but companies are not always right in such decisions," he adds. Jain is referring to Rain's 2007 acquisition of the US-based CII Carbon for $595 million. Rain finance chief Rao reiterates the company has a proven track record of making its acquisitions successful. "Since the CII Carbon takeover in July 2007, we have been able to maintain its financial health." While North America and Europe are important markets for us, Houghton will focus more on Asia: Ravi Chawla
Another analyst, not wishing to be named, says Piramal's acquisition track record is not inspiring. "In 2008, when it acquired the US-based Minrad, the company gave impressive growth targets for it. After two or three quarters, it toned down the projections. Similarly, its acquisition of the Morpeth unit from Pfizer in 2006 has not yielded good results. The facility runs at about 50 per cent of installed capacity as it is unable to get contracts," says the analyst.

Local problems
The acquisitions come at a time when the acquirers are facing poor growth visibility in their India businesses. Rain, which gets nearly 90 per cent of its revenue from CPC, will find it difficult to expand locally. CPC is derived from green petroleum coke (GPC), a byproduct of the light, sweet crude oil refining process. GPC production is constrained as refineries, particularly new ones, process the cheaper heavy, sour crude to maximise refining margins. CFO Rao admits that raw material supply is a major constraint. Motilal Oswal expects Rain's pre-acquisition revenue to fall 4.8 per cent and 5.4 per cent in 2012 and 2013, respectively. Its revenue for 2011 was Rs 5620.10 crore.

Gulf Oil is one of 15 small players in India's lubricants market, where state-run companies Indian Oil, Hindustan Petroleum and Bharat Petroleum, and BP Plc's Castrol unit control almost 80 per cent. Gulf Oil's revenue has grown less than one per cent between financial years 2009/10 and 2011/12. High crude prices and a weak rupee have inflated input costs. The lubricants market is growing at two to three per cent, says Chawla.

Indian Hotels's revenue growth has been patchy in recent years. Its margins have shrank from 30 per cent four years ago to about 12 per cent now due to low occupancy rates and high operating costs. "Hospitality sector is linked to economic growth. If the economy is not doing well, so does the industry," says Shah of ICICI Securities.

Indeed these companies' overseas acquisition spree in the current conditions remains a mystery wrapped in a riddle.