The commencement of gas supply from RIL’s finds is set to re-energise India’s fertiliser industry, hitherto hobbled by costly feedstock and subsidies. 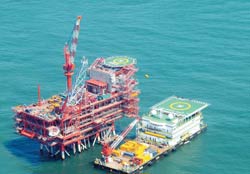 On April 1, big announcements tend to be taken with a smidgen of salt. This, however, was no prank. On the east coast, in a small village called Gadimoga in Andhra Pradesh, an event that seems set to propel India into the big league in terms of energy security was beginning to play out. Mukesh Ambani’s Reliance Industries Ltd. (RIL) was ready to supply natural gas from its gas discoveries— called Dhirubhai 1 and Dhirubhai 3—in the KG-D6 block in the Krishna-Godavari basin.

Whilst RIL’s gas will doubtless change the economics for many sectors that so far have had to rely on more expensive feedstock, one industry that’s set for a structural shift is fertilisers—more specifically the urea producers— which will be the first beneficiary of the gas. The benefits include: An ability to use working capital more efficiently, higher capacity utilisation, a more environment-friendly method of production and an opportunity to finally pursue growth, thanks to larger cash flows.

To start with, the government, too, will benefit. Here’s how: So far most of the urea producers have been using gas and other feedstock like naphtha or liquefied natural gas (LNG), the latter two being more expensive feedstock, by some 50 per cent.

“Because of an acute shortage of natural gas, many gas-based fertiliser plants are forced to use costlier feedstock like re-gassified liquefied natural gas or naphtha. This in turn increases the subsidy burden on the government,” says P.M.S. Prasad, President & CEO (Petroleum), RIL. U.S. Jha
The actual cost of natural gas from the KG basin will be between $5.5 and $6.5 per million British thermal unit (mBtu), depending on how far the gas is transported— the fixed cost is $4.2 (mBtu). In comparison, the cost of naphtha or LNG is between $8 and $10 (mBtu) and this had gone up as high as $20 when crude prices were over $100 a barrel. The upshot: A saving in terms of government subsidies. Petroleum Secretary R.S. Pandey says gas sales by RIL to fertiliser firms will help reduce the cost of fertiliser subsidies by up to Rs 3,000 crore.

Adds Satish Chander, Director General of the Fertiliser Association of India, the apex body for the industry: “A major gainer will be the government due to lower price of the feedstock, as it will have to give fewer subsidies.” An analyst at broking firm IDFC-SSKI Securities says: “With the government directive to all naphtha-based plants to convert to natural gas by financial year 2010, we expect the steep fall in naphtha requirement to yield savings on crude imports and lower the government’s subsidy bill.”

Along with the government, the fertiliser companies, too, stand to benefit. Officials at fertiliser companies say they will be in a position to save on their working capital and improve their financial efficiency. U.S. Jha, Chairman & Managing Director of the stateowned Rashtriya Chemicals & Fertilizers (RCF), says the public sector company will be able to save Rs 800 crore of annual subsidy.

Urea makers will also get a chance to ramp up capacity utilisation, currently at average levels of 70-80 per cent. “This (gas) will enable plants to run more efficiently, and will make them more environment-friendly, too,” says Kapil Mehan, Executive Director, Tata Chemicals. “Operating efficiency will come due to higher capacity utilisation as the government pays a fixed subsidy and does not compensate for higher consumption of energy,” adds H.P. Pandya, Executive Director, Gujarat State Fertilizers & Chemicals (GSFC). He says GSFC will be able to operate its urea plant at 100 per cent capacity after the gas starts flowing into its Vadodara plant.

Higher capacity utilisation naturally translates into higher profitability, although nobody’s willing to hazard an estimate as to by how much will the bottom line actually grow. “There will be extra conbt even to profits after interest and deprecation,” says R.S. Nanda, Chief Operating Officer, Nagarjuna Fertilizers & Chemicals. Tata Chemicals’ Mehan, too, is looking forward to higher profits at the operating level.

If profits are higher, the fertiliser companies can now think of doing something most of them couldn’t dream of in the past: Capital expenditure. Before doing that, they can contemplate restarting some mothballed units that were rendered unviable. Then promoters can consider expansions, something they haven’t thought about in a long time—in the past 10-15 years, capacity additions via new plants have been virtually nil.

In anticipation of RIL’s gas, a flurry of brown-field expansions has been under way. Tata Chemicals has increased urea capacity at its Babrala (Uttar Pradesh) plant to 11.55 lakh tonnes from 8.5 lakh tonnes in December, with an investment of Rs 210 crore. RCF will re-start a small plant in Trombay (on Mumbai’s outskirts), which was lying shut for the last 4-5 years; this plant has a capacity to produce 3.33 lakh tonnes of urea. Kapil Mehan
RCF is also increasing capacity at its Thal Plant (near Mumbai) to 19.5 lakh tonnes from 17.07 lakh tonnes through de-bottlenecking; a new plant of 1million tonnes is being considered at the same site. Total investment at Thal: Rs 500 crore. GSFC is also thinking of replacing its old plant with a new one and planning to add around 1 million tonnes of urea capacity at Dahej in Gujarat. Pandya of GSFC says this is in anticipation of the future gas supply and not linked to the current agreement with RIL. Nagarjuna Fertilizers & Chemicals has already spent around Rs 225 crore in de-bottlenecking and added 2 lakh metric tonnes of urea capacity. Nanda of Nagarjuna says the benefit of the gas and added capacity will begin trickling in by 2009-10 and the full benefit will be visible in the year after.

Industry experts reckon that many more closed plants will be revived as gas availability increases. It is estimated that the total demand from the fertiliser sector in coming years will shoot up to 74 mmscmd (million metric standard cubic meters per day). Of this, 44 mmscmd will be used by existing plants, 13 mmscmd from de-bottlenecking and expansion, 7 mmscmd from conversion of naphtha and other feedstocks and 10 mmscmd from revival of closed plants. Current gas supply—from ONGC—is 28 mmscmd and an additional 15 mmscmd will be supplied by RIL as per its agreement with 11 fertiliser companies. These include IFFCO, KRIBHCO, National Fertilizers Ltd., Chambal Fertilisers and Chemicals Ltd., IndoGulf Fertilisers Ltd., Shriram Fertilisers and Chemicals Ltd.,