Pause on the bull run

Most market experts expect the Sensex to remain in 12,000-16,000 range for a while—unless the government lifts the sentiment with big-ticket reforms.

It’s a widely-held belief that the IPO market takes a strong cue from the secondary market. This, then, should be the time when the Indian primary market is a beehive of activity. After all, from the lows of March 2009, the index has moved up by more than 80 per cent. In fact, the BSE Sensex delivered returns of 52 per cent in the first quarter of fiscal 2010 alone.

Now here’s the ground reality— we have had only five IPOs raising, in all, Rs 8,500 crore (including the big NHPC IPO), in the first five months of the fiscal. As many as 17 other companies have got the SEBI nod to raise capital but are waiting on the sidelines. Typically, SEBI approval is the last hurdle, yet companies have been sitting on these approvals for months now.

Says Prithvi Haldea, CMD, Prime Database: “A sense of stability in secondary market is critical for IPOs to happen. An issuer would ideally want a stable market for at least 30 days—the time it requires to open and list an IPO. Since the companies are not sure that the buoyancy in the secondary markets will last, IPOs are not happening.”

So, are these concerns a sound assessment of the spectacular bull run on the Indian bourses over the past five months? So far, the market rally has been driven by a host of reasons—upturn in the economy, formation of a stable government, expectations of a revival in the global economy and robust FII inflows. 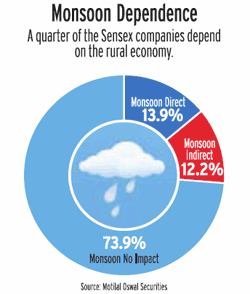 Already, the Indian markets have outperformed most other emerging markets this year. Says Gaurav Dua, Head-Research, Sharekhan: “Ultimately markets will be driven by two factors—earnings and valuations, as measured by price-toearnings (P/E) multiple.”

Green Shoots But...
In terms of earnings growth, the first quarter results of India Inc. were encouraging with better-thananticipated numbers. This is important because analysts believe it has triggered an earnings upgrade cycle which would provide support to the market. The upward revision in the earnings estimates has been largely driven by automobile, cement, information technology (IT) services and banking stocks.

A more widespread recovery in economic activity, pick-up in investment and consumption along with improving global scenario are expected to further drive upgrades in the earnings estimates. Says Sanjeev Patkar, Director (Research), Dolat Capital: “The good show in the first quarter is an outcome of the stimulus packages announced by the government which have started to make an impact after a lag of a couple of quarters.”

However, the monsoon trend has emerged as a key risk to meaningful upgrades in the short term. Buoyancy in the rural economy has been the key growth driver in FMCG and automobile sectors. Demand for these sectors could face a temporary setback due to poor monsoons, as consumers downtrade or shift to lower priced offerings by the unorganised sector. Says Manish Chokhani, Director, Enam Securities: “A sub-par monsoon will affect rural demand and could lower India’s GDP growth by almost 1 per cent.” 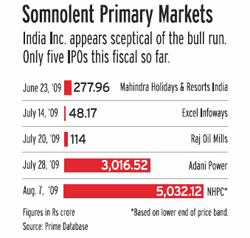 Among Sensex stocks alone, it’s estimated that 12 per cent of earnings are derived from direct dependence on rural demand (auto, FMCG, telecom) while another 14 per cent are indirectly dependent (state-owned banks, cement). Says Raamdeo Agrawal, MD, Motilal Oswal Securities, “The monsoon scare will take its toll on the market and may make it tough for the Sensex to go significantly above its present levels of 15, 000-plus.”

Analysts point out that the next trigger for the market could be decisive government intervention to ward off the impact of lower income in agriculture-dependent sections. This could be through increased focus on rural employment schemes like NREGS. Also, there are expectations from the new government to unveil a new set of reforms to improve the growth prospects of the economy.

A raft of measures like possible divestment, increase in permissible FDI in sectors like insurance, steps towards consolidation of state-owned banks, oil price deregulation and continued infrastructure thrust would be viewed positively by the market. A continued soft interest rate regime by the RBI, too, would send the right signals.

Points out Harsh Pati Singhania, President, FICCI, “Bad monsoons means we have to maintain fairly high growth of the industrial and services sector to support overall growth of the economy.” Adds Y.M. Deosthalee, CFO, L&T, “If interest rates rise then it could affect the infrastructure projects.”

In terms of valuations, the Sensex appears to be more expensive than other emerging markets. The BSE Sensex now trades at a forward P/E of about 16.1 compared to its 15-year average of 14.3. At the current levels, earnings yield to bond yield is 0.8, close to the longterm average of 0.73. These are important parameters indicating that equities have moved from a stage of undervaluation to their long-term average fair values. Says Jyotivardhan Jaipuria, Head of Research, DSP Merrill Lynch, “Since India already trades at a premium to the other emerging markets further premium in terms of higher P/E is unlikely.”

The Big Picture
So, how does the big picture stack up for the markets? With the lacklustre monsoons casting a shadow over the India growth story and valuations appearing stretched, most analysts feel the bulls may have to make a strategic retreat. There are also concerns now that the H1N1 flu scare could further hit domestic consumption in the short term during the approaching festival season — particularly in the top five metros, which account for almost 30 per cent of India’s consumption.

The consensus among analysts seems to be that the markets may trade in a range for a while. Motilal Oswal estimates that Sensex will move in a band of 12,000 to 15,000. Other brokerages like Sharekhan peg it at 12,500 to 16,000, while Prabhudas Lilladher is more optimistic with an estimate of 16,500 to 18, 000. Says Sharekhan’s Dua, “The market has factored in most of the good news. With little support from the valuation front, any further upside in the near term would purely depend upon global cues and liquidity.”

For investors, analysts say it’s time to exercise caution now while handpicking stocks. Don’t buy into sectors alone—invest in the fundamentally sound companies and it’ll pay off. Says Apurva Shah, Head-Research, Prabhudas Lilladher: “Accumulating the good stocks on declines is a good strategy. Investors could even look at buying the index through instruments like the Exchange Traded Funds (ETFs) which would be less volatile than individual stocks.” Over the long term, most analysts underscore, given the Indian growth story, the markets will continue to trend upwards and stocks will outperform other asset classes.