Pink tourism grows as a niche category in India

Many online travel agencies have sprung up to facilitate  lesbian, gay, bisexual and transgender (LGBT) travel in India. Even some regular travel portals have begun organising special packages for this section, while others are seriously contemplating doing so.

Two of the participants in a gay pride parade in Delhi. Many online travel agencies have sprung up to facilitate travel for gays and lesbians in India
November 2011. A wedding is being held on the grounds adjoining the Devi Garh Hotel in Udaipur, Rajasthan. A small group of onlookers watches in fascination as the couple circumambulates the sacred fire seven times, while a Hindu priest chants mantras. Why are they so intrigued?

Because both those marrying are clad in smart sherwanis. Both happen to be men. The wedding is an instance of the growing phenomenon of lesbian, gay, bisexual and transgender (LGBT) tourism as a niche category in India. Both men were well aware that India is still a long way off from recognising gay marriages.

In fact, they were already married, having signed on the dotted line in one of the US states where gay marriages are legal. They were in India merely for the experience of a big, fat Hindu wedding. And their entire trip was organised by the travel agency Indjapink.com, founded by Sanjay Malhotra in October 2008. "The function lasted five hours and I was the best man," says Malhotra, who readily acknowledges that he is gay himself. He even arranged for a baraat to accompany the couple to the wedding venue. Did they face any prejudice? "On the contrary, they were treated like royalty," says Malhotra.

Indjapink.com is just one of a number of online travel agencies that have sprung up to facilitate LGBT travel in India. There is also Pinkvibgyor.com, begun by Rajat Singla in partnership with an Australian friend, Peter Housie, another self-confessed gay, in January 2010.

There is Outjourneys.com, founded by Abhinav Goel in April 2010. Even some regular travel portals, such as Go India Journeys (goindia.co.in) have begun organising special packages for this section, while others are seriously contemplating doing so. "In the next three to six months, we are also planning to start tours for the LGBT community," says Sharat Dhall, President, Yatra Online. "Travelling with like-minded people is essential for this group."

The biggest fillip this niche segment has received is the Delhi High Court judgment of July 2009 which decriminalised homosexuality by ruling that if Article 377 of the Indian Penal Code, which covers various 'unnatural' sex acts, was applied to consenting gays, it would be a denial of their fundamental rights. Rajat Singla Photo: Aditya Kapoor/www.indiatodayimages.com
But even after the judgment, attitudes have been slow to change. Malhotra, who started Indjapink even before the judgment, says he spent 10 months before that travelling the country seeking to sensitise hotel managers and tour guides to the needs of the LGBT community. "It is still a challenge to find gayfriendly tour guides and gay-friendly hotel managers," says Singla.

But customers are slowly trickling in, even though foreigners among them outnumber Indians. Malhotra says he began with just a dozen tourists, but in 2012 he had 120 of them. So too, Goel of Outjourneys.com had just 15 travellers in 2010. But in 2012/13, he had 200. "We should have more gay-friendly hotels in India," says Amit Agarwal, Vice President, Sales and Operations at Go India Journeys.

Charges at these portals vary, depending on the length of the tour and the quality of accommodation the tourists seek, but usually start around $2,000 per head, going up to even $35,000 per person for luxury, all-Indiatour packages.

"Margins are usually around 20 to 25 per cent in this business," says Goel, a qualified chartered accountant. The states most choose to visit are no different from those to which straight tourists too gravitate - Rajasthan, Kerala and Goa. Among specific locations, the most popular - once more, no surprise - are Agra, Khajuraho and Varanasi. 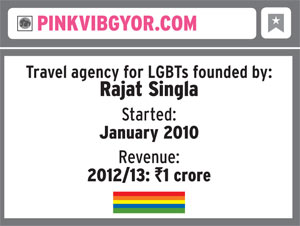 The portal owners also noted that the majority of their clientele was male. "Lesbian couples are very wary of travelling to India, or at least they don't announce that they are lesbians while in India and they seldom come through agencies like ours," says Singla. So too, travellers were mostly middle aged, perhaps because young people have less of disposable income.

One such couple was Robert Stanfield, 57, and Robert Unger, 55, from the US, who have been together for 31 years, and were on their second visit to India, organised by Pinkvibyor. Their experience of India, they say, has been mixed. "At a hotel in Jodhpur, the staff apologised because they could only give us a room with a large double bed, and not twin beds," says Unger smiling. "We told them a double bed was exactly what we wanted. You could see the confusion on their faces."

Malhotra regretted that the government had not done anything to encourage LGBT tourism. "Till now, we haven't got any proposal from private players or any sizeable data suggesting that this is a sector deserving of separate focus," says a Ministry of Tourism official who does not want to be named.

Certainly, it is early days yet. "Right now, it is only local businesses reaching out to gay tourists. What will really make a difference is if tourism offices of the country get on board to make a wider push to LGBT travellers globally," says LoAnn Halden, spokesperson for the US-based International Gay and Lesbian Travel Association.
Published on: May 11, 2013, 12:00 AM IST
Posted by: Navneeta N, May 11, 2013, 12:00 AM IST