Ajay Piramal is betting on real estate and financial services to create a $20 billion business by 2020. The Shriram Capital-IDFC deal will fast-track his march.

When Business Today carried a report in April last year about Piramal Group Chairman Ajay Piramal's plans to create a $20 billion empire by 2020, many felt it was an aspirational, even aggressive, target. The reason for this scepticism was simple. In 2010, his net worth was estimated at $1 billion, and after selling the flagship drug formulations division of Piramal Healthcare to Abbott for $2.9 billion, the group was left with a small pharmaceutical business and a struggling glass business with revenues of nearly Rs 2,000 crore. The listed Piramal Enterprises (then Piramal Healthcare) got just Rs 15,000 crore after expenses and paying taxes. After buybacks and dividends (Rs 4,866 crore), Piramal decided to invest the rest in businesses with 20-30 per cent-plus profits and took three-four strategic decisions. One was investing more in the US and continuing investing in contract pharmaceutical and over-the-counter, or OTC, businesses, apart from new areas such as knowledge management. Another was to deploy personal wealth into the real estate business in Mumbai. The third was to enter financial services, mainly funding the real estate sector and investing strategically in companies, in a big way. Among all businesses - from pharmaceutical, knowledge management, OTC, critical care and glass - financial services and real estate have turned out to be the biggest value creators. In 2017, Piramal's net worth was estimated at $5.6 billion. The recent proposal for the merger between IDFC and Shriram Group, where Ajay Piramal is the Chairman and Piramal Enterprises one of the largest investors, seems the Piramals' ticket to the $20 billion goal. But the question is, can they make it work? Though the finer details of the deal are yet to be worked out, the group's recent moves indicate that the pieces of Ajay Piramal's grand plan are finally falling into place, slowly but surely.

Two years ago, there were unconfirmed reports that Ajay Piramal was trying to take control of Infrastructure Leasing & Financial Services, India's largest unlisted infrastructure financial company. Things did not work out. "You need not have a bank to scale up in financial services. See how HDFC Ltd, an NBFC, grew over the years," Ajay Piramal had told BT a few months after these reports. A year-and-a-half later, HDFC founder Deepak Parekh and Shriram Group founder R. Thyagarajan were present at the function to announce the merger between IDFC and Shriram Group.

There has been a certain inevitability about this merger. After all, Piramal Healthcare spent Rs 4,583 crore in three deals in 2013 and 2014 to buy minority stakes in Shriram Capital, the holding company of Chennai-based Shriram Group, Shriram Transport Finance Company, and Shriram City Union Finance. While many saw this as a strategic investment like in Vodafone India - where it invested Rs 5,863 crore and exited with Rs 8,900 crore in three years - it turned out differently. After being invited to lead Shriram Capital when Thyagarajan, its founder, decided to retire, Ajay Piramal saw the investment as an opportunity for Piramal Capital - which is into real estate lending, asset management, corporate finance and distressed assets - to get a large retail exposure and scale up through Shriram's huge experience and reach, especially in South India. 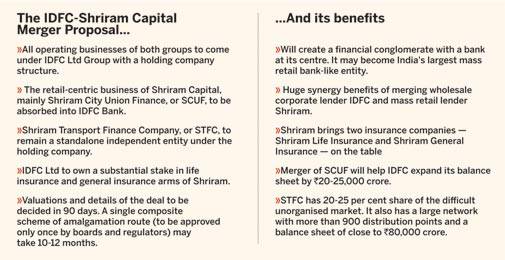 Though he brought in some of his people into Shriram Capital and shuffled some business heads, the biggest move was the appointment of Rajesh Ladda, Chief Financial Officer of the Piramal Group, as Managing Director and CEO of Shriram Capital, in the last week of June. Ladda, a confidant of Ajay Piramal, has been with the Piramals since 2001. He has been a part of all major decisions of the group. The merger announcement followed soon after. "Our partnership with Ajay Piramal has given us a lot of strength and confidence to go ahead," Thyagarajan said while announcing the merger on July 8.

Rajiv B. Lal, Managing Director and CEO of IDFC Bank, says the attempt is to create a financial conglomerate with a universal bank at its centre which may become India's largest mass retail bank-like entity. "The contours and details of the mutually beneficial deal will be worked out in the next three months," he says. 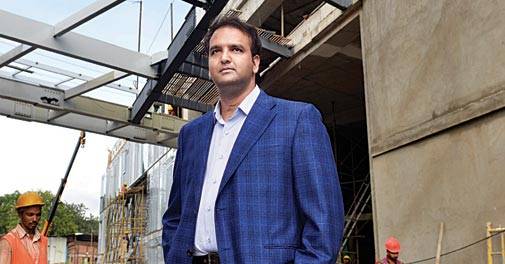 How the Piramals benefit and what will be the role of Ajay Piramal in the new entity still remain unanswered. "As an investor, we will benefit like any other investor. It is too early to predict. We are yet to work out those details," says Ajay Piramal who, deal or no deal, is already the master of a big financial play.

Ajay Piramal was among the first in India to fund real estate, way back in 2005, with Indiareit. In 2014, the group merged the combined Indiareit Fund Advisors and non-banking finance arm Piramal Finance into Piramal Capital, the holding company, to form Piramal Fund Management Pvt Ltd, or PFMPL, one of the five segments of Piramal Enterprises. "We have experience in this space and know the challenges. We know where you can make money and where you cannot. Our strategy is to finance land acquisition, construction. Sometimes, we provide equity, even last-stage apartment funding, too," Piramal had explained earlier. The smartest decision was funding only top-notch developers who were unlikely to default.

After two-three years of lending, financial services is the fastest-growing segment of Piramal Enterprises, accounting for 40 per cent revenues, the second-highest after the pharmaceutical business. For year ended March 2017, financial services yielded Rs 3,352 crore out of Piramal Enterprises' total revenue of Rs 8,547 crore. That was a 92.2 per cent increase from the Rs 1,744 crore earned in 2015/16. Loan book grew 87 per cent to Rs 24,400 crore from Rs 13,048 crore in the previous year (this includes Rs 3,600 crore non-real estate lending to companies). Construction finance accounted for 57 per cent loan book. Total funds under management are $ 5 billion.

Under Ajay Piramal, the group had entered the real estate sector in the 1990s, when it developed marquee real estate projects such as India's first modern retail mall, Crossroads, and Mumbai's landmark business destination, Peninsula Corporate Park. However, in the family split in 2005, the real estate assets went to the wife of Ajay's elder brother Ashok, Urvi Piramal, and her sons.

When Ajay Piramal was firming up plans after the Abbott deal, his son, Anand Piramal, came to India after getting an MBA degree from Harvard Business School. In 2012, he was inducted into the group management team as an executive director, with the responsibility of heading the unlisted real estate business under Piramal Realty. Anand's sister, Nandini, also an executive director with Piramal Enterprises, was given the charge of developing Piramal's human resources and consumer health care businesses. Her husband, Peter DeYoung, is the CEO of Piramal Critical Care, a part of Piramal Enterprises.

In their second shot at real estate, the Piramals decided to limit Pwiramal Realty's focus to the Mumbai market in the initial years. "Mumbai has a lot of opportunities and huge demand. Also, if you look at the top real estate developers, none have succeeded in markets outside their home turfs," says the 32-year-old soft-spoken Anand Piramal. "We are investing Rs 16,000 crore (including land and development costs) in the ongoing projects," he says. There is a big reason why their real estate play makes more business sense than that of other players. The Piramals have been investing personal wealth in real estate in Mumbai over the years. Sources say Ajay Piramal had got over Rs 1,200 crore as dividends after the Abbott deal, and the responsibility of deploying this money was given to Khushru Jijina, Managing Director of Piramal Fund Management. "Their biggest advantage compared with other real estate developers is that they own huge land banks in various parts of Mumbai bought years ago. Their main spending is in construction, which they can recover in no time," says Sandeep Sadh, CEO of Mumbai Property Exchange, a real estate advisory.

In 2011, Gliders Buildcon, a subsidiary of the Ajay Piramal-owned Piramal Realty, bought a seven-acre textile mill land at Byculla from Mafatlal Industries for Rs 605 crore. A year later, Ajay Piramal bought a one-acre sea-facing property at Bandra named Gulita from Hindustan Unilever for Rs 452.5 crore (Gulita was later converted into a home for the Piramals, who also own a weekend home at Alibaugh sea shore).

Anand says Piramal Realty has been one of the fastest-growing companies in the sector ever since it launched its first project in 2015. In 2016/17, it reported revenues of Rs 1,100 crore. This year, it may post about Rs 1,200 crore, he says.

Piramal Realty has four big projects under development at Thane, Byculla, Mulund and Bandra Kurla Complex. Anand is trying to make the projects stand out by stressing quality and convenience. "We wanted to focus on customer centricity, architectural design, quality, safety, and build India's most admired real estate company, and not just for its scale and profitability," he says. For that, the Piramals have tied up with several global partners. Piramal Realty has also created a board of advisors that includes HDFC Bank Chairman Deepak Parekh, Harvard Business School Dean Nitin Nohria, former Emaar CEO Robert D. Booth, McKinsey's Real Estate/Infrastructure Practice Director Subbu Narayanaswamy and Piramal Enterprises Fund Management Managing Director Khushru Jijina, who was earlier the Executive Director of Piramal Sunteck Realty, an erstwhile joint venture of the Piramals.

But the ride for the young Piramal Realty may not be smooth, say experts. "They have been in the market for just two years. The Mumbai property market is highly competitive," says Sandeep Sadh.

"The effects of de-monetisation are still there. The demand is shifting towards affordable houses of less than Rs 60 lakh and low-cost houses," says Dr. Samantak Das, Chief Economist and National Director, Research, Knight Frank.

But the Piramals are putting their best foot forward. They are reaching out to potential customers with flower shows, aggressive marketing and a buyback guarantee scheme. Vivaan, one of the most premium towers of Piramal Vaikunth, has been reserved for non-resident Indians from Dubai. When Piramal Realty launched Piramal Vaikunth at Thane in September 2015, the first phase inventory of over Rs 400 crore was sold within 12 days. On the day of the launch, over 100 units were sold within three-four hours, says a company press release.

Funds for projects are also not an issue for the cash-rich Piramals. As a policy, the real estate fund belonging to the listed Piramal Enterprises does not fund Piramal Realty projects. "That is because of corporate ethics," says Anand. The New York-based private equity firm Warburg Pincus invested $284 million in July 2015 for a minority stake. A month later, financial services giant Goldman Sachs invested another $150 million in what was the largest investment in India's real estate sector. "That shows the faith in our capabilities and our reputation as a group," says Anand, who is planning to buy more distressed assets in the real estate market.

"More consolidation will happen in the sector as many companies we approached earlier are coming back to us to sell at a lower price," says Anand. He wants to make Piramal Realty among the top three real estate companies in India by net asset value by 2020, the year his father hopes to take the group's net asset value to $20 billion from $9.5 billion at present. It seems the Piramal Group is on course to meet its target.