The knitwear capital of India is being squeezed by two messy problems: forex deals gone wrong, and a polluted, dying river.

Noyyal river, now carrying only waste waterfe
Suman Layak
Unlike N.R. Narayana Murthy of Infosys Technologies, E. Palanisamy has not created any millionaires out of his employees. But, Palanisamy, 65, says proudly: "In 40 years, I have helped at least 100 employees become business owners."

Like Infosys's hometown Bangalore, Tirupur in Tamil Nadu evokes images of big-time entrepreneurship. Today, the knitwear capital of India, which got going in the late 1980s, racks up exports of around Rs 12,000 crore a year. Among its customers are global brands such as Levi's and Reebok.

End of Story. The End? What happened to the rest of the script? Well, Tirupur the knitwear hub is threatened by two prolonged developments that have boiled over. One, in 2007, some smart big-city banks sold exotic foreign exchange contracts to the hosiery units here. The deals turned sour, and the units were left holding the can: a combined loss of Rs 300-400 crore.

Two, after a prolonged battle by citizens to clean up the nearby Noyyal river, which had become a drain for all effluents from dyers and processors, the Madras High Court has ordered all the common effluent treatment plants or CETPs to shut down. The reason: the CETPs have failed to ensure zero liquid discharge as promised. The 800-odd dyeing units cannot function without CETPs. A. Sakthivel, President, Tirupur Exporters' Association
Palanisamy's Armstrong Knitting Mills makes T-shirts and vests for the Swiss brand Migros. It faces a crippling Rs 30-crore loss arising out of derivatives contracts marketed to it in 2007, when the dollar was falling sharply. A cheaper dollar means fewer rupees for an exporter, so hedging was not new to Palanisamy. But his bank, instead of giving a simple protection against fluctuations in the dollar-rupee rate, sold exotic contracts that offered a hint of quick profits. The contracts paired the dollar with the euro, the Swiss franc or the Japanese yen. So when the dollar fell against the Swiss franc, there was a bloodbath. The contracts limited the loss for the banks, but not for the Tirupur units.

More worrying is the January 28 Madras High Court order calling for the closure of all CETPs. The court has told the units to move the Supreme Court if they wish.

Already, one-fifth of the exporters had shut down in 2010, when raw cotton prices doubled over the levels in 2009. Add the 20,000 jobs lost over the past two years, the closures arising out of the court order, the derivatives hit and the Rs 300,000 crore or so that the banking industry has invested in Tirupur so far - and you have a nightmare.

A loss is contracted
Tirupur is synonymous with enterprise: 25 years ago, it was not even a taluka or subdivision of a district, but the drive of its knitwear entrepreneurs put it on the world map. In 2008, the state government carved out an eponymous district with the town as the headquarters. 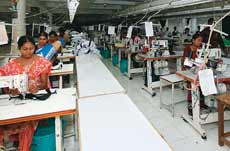 Workers at Warsaw International
But, while Tirupur has become a global player, the village has not gone out of the town: at most offices, visitors are expected to take off their shoes at the door. Outer walls of houses and offices sport the images of the demon Kirtimukha - said to be created by Lord Shiva and later blessed by him - to ward off the evil eye. May be Kirtimukha was not alert enough in 2007, when banks landed up at Tirupur's doorsteps with exotic forex contracts.

Raja Shanmugham, who heads the Forex Derivative Consumers' Forum, formed after the crisis, faces a loss of Rs 2.8 crore. This is big enough to sink Shanmugham's Warsaw International, which exports Rs 5 crore worth of knitwear a month.

Shanmugham says: "In the second quarter of 2007, there was an unprecedented fall of the dollar against the rupee from 46 to 39. We saw profits erode from when the dollar was at 43." This is when the banks entered the picture. The going looked good initially and the exporters made a few lakhs each. But, when the dollar rebounded, their losses ran into crores of rupees.

Shanmugham's group then roped in S. Gurumurthy, a chartered accountant better known as a mediator in business family feuds such as the one in the Bajaj family, and for his role as co-convenor of the Swadeshi Jagran Manch. The forum petitioned the Parliamentary Standing Committee on Finance and the Reserve Bank of India. 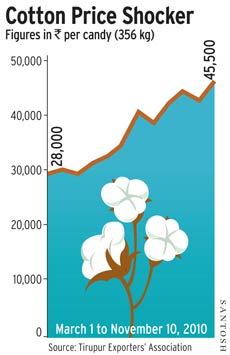 Pravanjan Patra, a Cuttack-based tax lawyer, moved the Orissa High Court in May 2009, alleging that huge amounts of money had been siphoned out of India through these exotic instruments. The Central Bureau of Investigation was called in.

The case is now in the Supreme Court following an appeal by the Fixed Income Money Market and Derivatives Association of India. The Indian Banks' Association has joined it with an intervener petition. Shanmugham, who had once aspired to join the Indian Administrative Service, says: "We trusted the banks like our godfathers. They sent men in suits with laptops, telling us how we would face no risk. Our executives were taken on foreign junkets. Now see where we have landed." He and the others have filed separate civil suits in the district court against the enforcement of these contracts.

Waste not: Not even a drop
The 20 CETPs, some set up in the 1990s and later, and some after 2006 following a high court order, burn firewood to evaporate the water from the effluents: Firewood is cheaper than electricity here.

When the Noyyal River Ayacutdars Protection Association moved the Madras High Court in 2006 against the polluters, the dyers gave an assurance that there would be zero discharge into the river. The CETPs adapted to this and were approved by the Tamil Nadu Pollution Control Board or TNPCB. But they failed to ensure zero discharge. The Madras High Court stepped in when a contempt of court petition was filed by those lobbying for a clean Noyyal.

P.H. Shanmuha Sundar, who runs the Mannarai CETP, says: "There were 28 units sending their effluents to this CETP. Six have closed down as they could not bear the costs." Each dyeing unit has to pay around Rs 5 lakh a month to its CETP, and also a share of the interest on the loan taken to set up the CETP.

Sundar, a Masters in mathematics who wanted to be a professor before he changed his mind and got into dyeing, says the dyers tried various cost-saving options like running their plants only three days a week. In December, the TNPCB shut down five CETPs, sealing the fate of 130 dyeing units linked to them. Around 100 dyeing units had closed earlier.

A. Sakthivel, the president of the Tirupur Exporters' Association, has been the face of the association as well as the industry in Tirupur for the past 18 years. The son of a police officer, Sakthivel trained as an automobile engineer in Jamshedpur. But when he found that people in Tirupur did not care much for an engineer, he set up a hosiery unit.

Sakthivel says the sharp increase in cotton prices has already forced a fifth of the exporters out of business. "We take our orders from foreign companies on a six-monthly basis, but cotton and yarn prices have jumped every week over the last year," says Sakthivel, who is also a former president of the Federation of Indian Export Organisations. Many chose to not take up fresh orders.

Sakthivel wants the government to calibrate the export of cotton and yarn. "Allow only five lakh bales of cotton and 50 million kg of yarn to be exported each month," he says. His argument: Export of one kilogram of cotton yarn fetches around Rs 220, while the same weight of garments earns Rs 850 - and provides work to more people. Click here to Enlarge
Sundar, whose CETP is struggling to eliminate the last 15 per cent of the water from the effluents it processes, says zero discharge is impossible. Two solutions are on the table. One is to build a pipeline to send the leftover effluent out to the sea. The other is an idea hatched by Kalidas, whose dyeing unit had to close down in December 2010. Kalidas points to the natural evaporators used in Europe. The effluent, instead of being boiled, is cascaded over a series of wooden structures, which breaks it into droplets. The hot sun does the rest.

Kalidas had tried a natural evaporator 10 years ago, but the TNPCB did not approve it and he had to give up the idea. A new pilot project has been started and Kalidas has got the Indian Institute of Technology, Madras, interested in it.

Shanmugham of Warsaw likes Kalidas's evaporator. "This natural evaporator creates ozone molecules and people in Germany flock to such evaporators to inhale the ozone. We will create health tourism around the natural evaporators," he says.
Some hope, some spit
There is hope yet for Tirupur, since its rivals in China and Bangladesh are being priced out of the market. "The competition is China and Bangladesh and both are turning uncompetitive," says S. Dhanajayan, a chartered accountant in Tirupur. China is facing higher wage costs, while the units in Bangladesh are suffering from power cuts.

Anand Sannasi, COO of Exim Knits, which makes vests and T-shirts for Levi's, says he does not have to go looking for orders nowadays. "People from Europe and the US are visiting us regularly to place orders," he says.

Sannasi says there is new competition from Vietnam and Cambodia but these countries have to import their cotton. Even China, the world's largest cotton grower, has to import cotton to feed its industry. "In India [the second-largest cotton producer] we have our own cotton and it can be a big advantage for us," says Sannasi. But Tirupur has not been able to make the most of its advantages. The exports have been flat after rising to Rs 11,000 crore in 2006-07.

Another example illustrates the gap between global aspirations and Indian reality. TV SD, the German certification agency, has a laboratory in Tirupur for testing garments and training companies on standards. Everything is fine, but for the alkalinity that it often detects in the garments made for exports. The alkalinity comes from human saliva. Go figure that.

The rapid growth and subsequent gloom over Tirupur's industry have created a powder keg of emotions: the town is India's new suicide capital. According to official data, 1,000 people committed suicide in 2009 and 2010. Of the 565 suicides recorded last year, 245 had consumed poison, 188 hanged themselves and 59 consumed cow dung powder, which is marketed as a disinfectant.

(The government has since banned the sale of this lethal powder.) There are around half a million migrant workers in Tirupur, from within Tamil Nadu and other states. One such worker, Vijay Kumar, 22, from Narayanpur in Nepal, has been working in Tirupur for the past four years. He had been to his village last year, but is yet to see his daughter, born there last December. Another, I. Ramjan, 25, has seen her husband move to Chennai for a job, leaving her behind with their two-year-old son.

Every rupee counts in their family. The presence of this huge migrant workforce has led to a breakdown in social mores in Tirupur. A. Viakulamary, who works for a non-governmental organisation or NGO, says there are no red light areas in the town - but even so the NGO has to run an AIDS counselling group. "The men tell us that they have no idea when they might get a girl. There is no way to plan for sex and carry condoms," she says.

For the first decade of Tirupur's existence, it was the workers who kept alive the spirit of enterprise. Palanisamy says that most employees who left to set up their own businesses did so before 1990. Some more did in the next decade - but hardly any employee has ventured out since 2000.