Will Deepak Kapoor be able to protect PwC India's legacy?

Deepak Kapoor, Chairman, PwC India
Suman Layak
During the 2008 audit of Satyam Computer Services, the company management provided PricewaterhouseCoopers, or PwC, with a response from the Mumbai branch of a bank saying that Satyam held $176 million in fixed deposits, or FDs. A response from the Hyderabad branch sought by the auditor said Satyam had no FDs with the bank. The conflicting reports were not investigated, says the US watchdog Public Companies Accounting Oversight Board, or PCAOB.

Satyam's management often used a "super user" function in the company's billing software to create fake invoices, which amounted to $1 billion during the entire period of the fraud - an accounts receivable fraud that PwC as auditors could not detect, points out US markets regulator Securities and Exchange Commission, or SEC.

Picking dirt - like the two instances above - out of PwC' s reputation in India is like flogging a dead horse. The firm is, however, trying to breathe life back into its image, despite all the baggage holding it down. With a new Chairman, a new CEO and a fresh logo, it is hoping for a break from the recent past. Yet, there are too many fires to douse for the Indian arm of PwC, one among the big four global audit and accounting majors.

As the order of the PCAOB shows, PwC and the network of its partnership firms in India need to set their houses in order. Profits are sagging and senior partners have left the firm. An assertive global network has sent its man from the United States to head the Indian operations. The firm with a 138-year history in India -160 years globally - has its most challenging year or two ahead.

A lot of it is also about Deepak Kapoor, 52, in the race to head the firm since 2007. Chairman since December last year, Kapoor, a 33-year veteran of the firm, faces the challenge of being more than the local face of the global network of PwC. April 5, 2011, was crucial in Kapoor's efforts to take PwC India in a different direction. SEC and PCAOB simultaneously announced their acceptance of the proposal for settlement with the PwC network, censuring two Indian member firms, Price Waterhouse Bangalore and Lovelock Lewes, and imposing a total penalty of $7.5 million, or Rs 33.29 crore.

PwC also settled a class action suit with Satyam shareholders in the US for another $25.5 million. Says Kapoor: "We anticipated this and were ready with the money."

Call from HQs
The US settlements included commitments for extensive training in India to improve audit processes. (PwC has 10 partnership firms in India; five are registered with the PCAOB.) An independent monitor has been appointed by SEC who will certify audit process improvements. It is an Indian chartered accountant, earlier with a rival firm, says a PwC insider, while Kapoor says the decision is awaited. 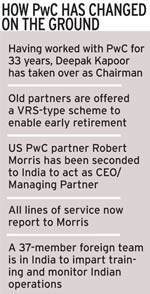 According to PwC insiders, the Indian firm will be set back by $100 million, or Rs 450 crore, nearly half its annual income of around Rs 1,000 crore, and the global network is bailing it out. The entire amount will be needed over a few years and will cover spending earmarked for training, payment to the independent monitor, peer reviews and other heads. Kapoor does not deny that the amount could touch $100 million. The global network, in turn, has extracted its pound of flesh.

Not only has it got its favourite boy, Kapoor, as Chairman, it also has its own man, Robert Morris - till recently Deputy Leader of PwC's US Taxation Practice - actually running the India show as Managing Director and CEO. Morris landed in India in March this year, three months after Kapoor took over. Both Kapoor and Morris are employed by PwC Pvt Ltd, a company that manages the advisory and taxation businesses, while the audit businesses are with 10 other partnership firms affiliated to PwC network.

An expat CEO hardly raises eyebrows nowadays. But for the small matter of India not allowing foreigners to audit accounts in India, just as Indian chartered accountants are not allowed to practice in the US or UK. Morris would never be able to ply his trade as an auditor in India - and yet the audit function of PwC India, among others, now reports to him. In spite of requests, PwC did not arrange a meeting with Morris.

This leg of Kapoor's journey started when he beat Regional Managing Partner Jairaj Purandare to the chairmanship of PwC India. Kapoor replaced Gautam Banerjee, who had come from PwC Singapore to manage the Indian arm after the Satyam scam came to light. Banerjee is now back as Executive Chairman of PwC Singapore.

Today all operations and lines of services in PwC report to Morris. Kapoor does not deny it. "I asked the network to send someone with expertise in the US to help me," he says. "As Morris is the CEO, on secondment from the US, all the operating functions report to him while I look at the outward client-facing functions." Morris is accompanied by another 37 expats on secondment to India. Kapoor points out that around 130 Indians from PwC India are also working in different parts of the network across the world (see Interview). However, Purandare quit in June this year.

Purandare told BT he was serving his notice period in PwC, but did not want to speak further. After the Satyam crisis broke in 2009, Purandare had often been the public face of PwC India. Since then and after N. Ramesh Rajan, the then Chairman stepped down in 2009, around 60 partners have left the firm. Sources say Rajan, who has continued in the firm even after stepping down as Chairman, may exit soon with a hefty payout or move to PwC Europe. Over the last 19 months or so, Rajan has been paid his emoluments, but has not attended office under an arrangement, the details of which are not known.

Rajan, who has strong political connections - he is the son of former Supreme Court judge S. Natarajan and related to Environment Minister Jayanthi Natarajan - was one person PwC could not afford to cut loose while the Satyam sword hung over its head. He had defeated Kapoor in open elections in May 2007. Now, with the major settlements behind it, the current management may feel emboldened enough to let him go. PwC faces one more class action suit in the US, and action by the Institute of Chartered Accountants of India, and SEBI. In the last two years competition has poached 35 partners from PwC (Read Power Struggle at PwC , BT, February 21, 2010).

Partner's earnings
A partner in an audit partnership firm takes a hefty salary and also brings in business. In Indian audit firms, partners usually share profits -- which are about a third of the income. Once an employee becomes a partner, he buys into the capital of the firm and enjoys a part of the profit. Usually a newly elevated partner makes Rs 1 crore a year in profits; a partner in his fifties gets around Rs 5-6 crore. The partners in the middle are the most productive at bringing in business. The older partners do not contribute as much in terms of income, but earn higher packets.

In the last two years, insiders say PwC's profits have fallen by 30 per cent and so the partners' earnings have dropped. "You can move to a competitor, earn more and not have the Satyam baggage," says a PwC insider. Kapoor denies these numbers, saying that while earnings may not have grown as much as they could have, they have not dipped dramatically either.

PwC is trying to hold on to the mid-level partners. To protect their earnings, it is trying to coax some of the older partners to retire early. Partners above 55 can now opt for voluntary retirement and leave with a year's salary. Some seniors like Sujit Deb, Sanjay Hegde and Kausik Datta have already left. Others like Thomas Matthew and Vasant Gujrati are expected to retire later this year.

There are murmurs asking if Kapoor's elevation as Chairman would have been possible without the support of the global partnership of PwC-linked firms. Two firms Price Waterhouse and Coopers & Lybrand merged globally to form PwC 11 years ago. Kapoor brushes aside suggestions of Price Waterhouse old timers trying to take over the firm. "I say all this is rubbish. I lost to Ramesh in a fair election in 2007, and was elected Chairman in an equally fair but more robust process in 2010," he says. (Rajan was originally from Lovelock Lewes, one of the firms that were linked to Coopers & Lybrand earlier.)

Kapoor has another two and a half years to go in which he has to set right the audit and assurance processes. He admits the audit business will grow the slowest in India. India is the largest growth business for all the Big Four and PwC can ill afford to ignore India. PwC, once the largest firm in India, is in danger of falling behind the other Big Three - Ernst & Young, KPMG and Delloitte.

Kapoor's approach is a departure from the way PwC has functioned in India so far. As a certified fraud examiner, Kapoor might be the right person to head PwC after what happened with Satyam. But, by the end of 2013, he will have to show results or he is likely face a stiff challenge at the next Chairman elections. The name of N.V. Sivakumar, Chairman of PwC's partner oversight committee, is doing the rounds as challenger.