Will the good times last for Quantum Mutual Fund?

When Ajit Dayal launched the fund house in 2005, he did not chase assets under management, but instead focused sharply on performance and profitability. Quantum's smart approach has seen it reap quick profits though the mutual fund industry is struggling.

We are not averse to selling our stake, but we will partner with people who match our style of investment and management: Ajit Dayal <em>Photo: Rachit Goswami/www.indiatodayimages.com</em>
Mahesh Nayak
When Ajit Dayal launched Quantum Mutual Fund (Quantum MF) in 2005, he chose to junk conventional practice. He did not chase assets under management (AUM), but instead focused sharply on performance and profitability. His most radical decision, however, was choosing not to sell his funds through distributors.

Instead, he built his own marketing and sales team. This was virtually unheard of then in the Indian mutual fund industry.

But Dayal, formerly chief investment officer with the first foreign mutual fund in India, Jardine Fleming, knew what he was doing. And his strategy has paid dividends so far - the Quantum fund earned a profit in its fourth year in 2009 and broke even by 2012 (See Rapid Progress). "Today we have investors in every state of India," says Jimmy Patel, CEO, Quantum MF. And this has been achieved at a time when most mutual fund companies are struggling to sell their products. Worst off are the small mutual funds, most of which are making losses.

One of Quantum's schemes has been particularly successful - the flagship Quantum Long-term Equity Fund (QLTEF), which recorded 35 per cent annual returns in the past three years compared with 12 per cent by the BSE Sensex. Quantum launched QLTEF in March 2006, with 25 employees, raising Rs 11 crore from 780 investors. Since then QLTEF's AUM has grown steadily - as on December 31, 2012, it stood at Rs 150 crore with an investor-base of 13,000 investors and 135 employees. For the last three years, it as been in the top quartile of the large-cap and mid-cap categories.

"The fund can be a good core holding of any investor's portfolio," says Dhirendra Kumar, CEO of mutual fund tracking firm, Valueresearch. The Quantum group operates three structures - the mutual fund, a portfolio management service and a Mauritius-based fund for foreign institutional investors (Quantum India Equity Fund). In all, the mutual fund business has eight schemes across asset classes such as equity, debt and gold. Managing equities, though, is its core competence.

No doubt, almost 90 per cent of Quantum MF's revenues still come from providing research to its FII fund which manages a corpus of $1.5 billion. But its own overall AUM has also been growing steadily, touching Rs 191 crore in March 2012. Industry experts claim that mutual funds need AUM of more than Rs 9,000 crore to break even, since the higher the AUM, the higher the revenue from operations, boosting profits. But here too, Quantum MF has bucked the trend. 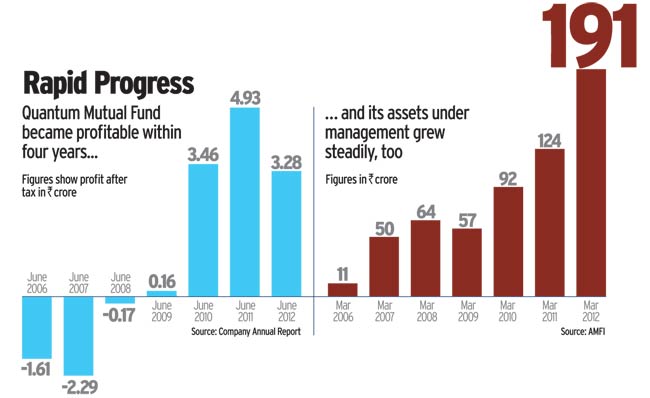 Dayal's two-decade experience as a fund manager is the main reason for Quantum's profitability. Apart from working for Jardine Fleming, he has also advised a number of other foreign institutional firms such as Vanguard and Hansberger. "One of the things we learnt from Jardine Fleming was how not to do things.

Hansberger taught us how to refine the research process and make more money for clients," he says. The equity portfolio in all the three structures Dayal runs is similar. The flagship QLTEF portfolio of Quantum MF resembles that of the portfolio management service and the FII fund. "Our investment strategy is the same for FII and retail funds," says I.V. Subramanian, Director, Quantum MF. Quantum so far has offices only in Mumbai, but intends to soon expand setting up more offices in the bigger Indian cities, increasing its manpower and the number of its funds.

The impressive performance of Quantum MF has made it a potential takeover target for the larger mutual funds, but talks with suitors have failed to make headway so far. "We are not averse to selling some of our stakes, but we will partner with people who match our style of investment and management, which includes direct selling of funds to investors," says Dayal.

Some industry experts, however, feel that Dayal maverick management style could work against the company's interests in the future.

"We don't advise Quantum funds to our clients. This is because Quantum does not talk to us about its investment philosophy and objectives," says Renu Pothen, Head of Research at Fundsupermart, a mutual fund advisory firm.

Some also feel that, far from helping it, staying away from distributors has slowed Quantum's growth, Dayal has justified his decision on the grounds that distributors mislead investors by mis-selling products.

"Badmouthing distributors was a big mistake. He thought he could garner Rs 10,000 crore by going direct and then sell his fund, but that hasn't worked," says an industry veteran on condition of anonymity.

The bulk of Quantum MF's revenues may currently be coming from servicing the group's overseas fund, but Dayal's ambition is to make the India business bigger than offshoring in the next five to 10 years. But for that to happen, Quantum might have to make inroads into asset classes other than equities.