As Rajat Gupta faces trial, Betwa Sharma, reporting from New York, says his fate hinges on whether the judge will dismiss wiretaps as hearsay.

Betwa Sharma
In 1970, a young student at the Indian Institute of Technology, Delhi, played the role of Trishanku, an ancestor of Ram, who was barred from entering heaven in human form and left suspended between the earth and the sky. That student was Rajat Gupta, who became India's trail blazer on Wall Street.

After four decades of extraordinary success, Gupta, 63, stands accused of leaking confidential information about investment bank Goldman Sachs and consumer products giant Procter & Gamble. The six counts of security fraud and one of conspiracy slapped on Gupta could, in theory, attract 125 years in prison.

"It's like he is Trishanku again…fallen from heaven and no longer accepted on earth," says Sandip Bhatia, who also acted in that play. Now the head of a Mumbai-based technology-consulting firm, Bhatia would come to admire his fellow actor during the weeks of rehearsals. "A role model and someone known to help others," he says. 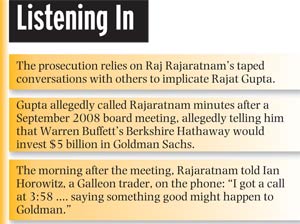 Click here to Enlarge
But many others have dissociated themselves from Gupta. His name was also dropped from the list of illustrious alumni for the 2012 Pan-IIT global conference.

However, a loyal band of Gupta's supporters remains, well, loyal. They say it is his bad luck to be made a scapegoat since insider trading is quite rampant . They express outrage at the charges. "He was never greedy," says Surinder Sharma, who was in the soccer team with Gupta at IIT and now runs an energy-management company in Toronto. "He showed a lot of integrity when we were sweating in the field."

After graduating as a gold medallist from IIT in 1971, Gupta attended Harvard Business School. Following a long stint with McKinsey & Company, which he joined in 1973, he became its global head. Over the years, the corporate icon also came to be respected for his philanthropic work, such as setting up the Indian School of Business in Hyderabad, raising $1 billion in relief funds after the Gujarat earthquake in 2001, and his campaign against malaria and AIDS.

He was never greedy. He showed a lot of integrity when we were sweating in the field"

A friend from IIT Delhi

Gupta, who lives in Westport, Connecticut with wife Anita Mattoo, a fellow IITian, and four daughters, was applauded for attaining the American dream yet remaining an Indian at heart. Jay Mandal, his photographer, was often invited to Gupta's palatial house near the ocean. "He picked me up from the station and told me his wife cooked well," says Mandal. "He isn't just another corporate guy, but a humble and loving family man."

In the midst of the financial crisis, Manhattan US Attorney Preet Bharara, who is on Time magazine's list of the 100 most influential people in the world this year, vowed to clean up Wall Street. The irony of both the cops and the robbers being South Asian immigrants was inescapable. The US government pulled out all the stops to ensnare Rajaratnam. It spent a huge sum on taping his conversations. Click here to Enlarge
More than 50 executives indicted for leaking information confessed or were convicted. Some of them testified against Rajaratnam, who is serving 11 years in prison. Gupta, who protests his innocence, was slated to go on trial on May 21 in Manhattan. The mystery revolves around what happened immediately after a Goldman Sachs board meeting on September 28, 2008. Did Gupta phone Rajaratnam with a tip that the investment bank was going to receive $5 billion from Warren Buffett's Berkshire Hathaway? The prosecution, which has the record of a call, claims that Rajaratnam bought Goldman shares minutes after putting the phone down and just before the market closed that day, and made $800,000 on the alleged tip.

But Gupta's corner sees the prosecution as arranging coincidences to force their case. Sreedhar Menon, former vice chairman of American Express Bank, emphasises that support for Gupta should not be construed as knocking the legality of the proceedings. "Our efforts are only to save his image, which has been badly tarnished by the media."

As the charges built up, Gupta's fall from grace was swift. With his reputation in shreds, he resigned from several boards including those of ISB and the Gates Foundation. Gupta now sees the trial as a challenge, says Rakesh Kaul, Chairman of a New Jersey-based outsourcing company, who is in regular contact with his friend. "He is confident that truth will surface once he tells his full story."

Gupta has reason to be optimistic. The evidence against him is flimsier than the case against Rajaratnam. There are no wiretaps with his voice actually passing on confidential information, or he being mentioned as the one who gave the information. The prosecution has requested US District Judge Jed Rakoff to allow some taped conversations that have Rajaratnam talking to others about getting tips on Goldman Sachs.

Gary Naftalis, Gupta's lawyer, has asked Rakoff to dismiss these tapes as "hearsay", since they do not even have the tipster's name. "You will know how tough this case will be for the government when we see Rakoff's decision on the wiretap suppression motion," said John Coffee, a law professor at Columbia University. "I make no prediction but it will be a critical predictor of the outcome."

Ahead of the trial, the judge has tentatively approved admitting these tapes but the decision is not yet final. Lawyers say the extent of unethical activity discovered in the Rajaratnam trial appears to have made judges more liberal about allowing wiretaps - traditionally reserved for situations that threaten national security - in insider trading cases.

Without the wiretaps, the prosecution could be left with phone records that could be perceived by a jury as weak circumstantial evidence. The defence has stressed that Gupta, unlike Rajaratnam, did not make profits on the alleged leaks. But a recent report in the US media cited the prosecution as alleging that, following a call made in July 2008, in which Gupta tells Rajaratnam that Goldman Sachs was planning to buy a commercial bank, the hedge fund manager increased Gupta's stake by $4 million in a fund in which both men had invested. The defence has argued against admitting this wiretap - the only direct evidence that the two men communicated with each other - because the information is already public and a live conversation could negatively influence the jury. But the judge has allowed it.

People who have worked with him cannot accept that money could be his motivation. "I never came across even a rumour of any wrongdoing or corrupt practice," says Sujatha Rao, former health secretary in India, who was on the board of the Global Fund to Fight AIDS with him. "I think he is being made a fall guy and his success has become his enemy." However, believe it or not, even in the world of Wall Street, there can be motivations other than money.

Experts point out that being part of an "old boys' network" is a valuable asset. This network, with few exceptions, is still dominated by Ivy League-educated white men. The pressure on immigrants, even the successful ones, to stay in the game can cause them to break rules.

Madhur Parashar, who recently completed his MBA in the US, describes how the feeling of being an 'outsider' seeps in soon after arriving on campus. "One always hears 'if you're from India, how do you speak such good English'."

Young Indian professionals working in the financial sector in the US do not fear any immediate repercussions of the recent events. But there is concern that Rajaratnam's and Gupta's trials could reinforce the stereotypes of corruption associated with the developing world.

"There should be no slippage at all," says 29-year-old Parashar, who has joined a Big Four auditing firm in Manhattan. "Otherwise, there will be the perception that we are good only for software or call centre jobs."