Rising debt and the slow pace of growth of the farm business have weighed on shares of Ram Karuturi-led Karuturi Global. The scrip has plunged more than 90 per cent to Rs 3 apiece from Rs 38 in October 2010.

K.R. Balasubramanyam
Sai Ramakrishna Karuturi feels a growing sense of unease these days. It stems from an email that Karuturi, whose eponymous floriculture company is the world's largest exporter of rose stems, received on March 7. The sender wrote he had lost Rs 7 lakh by investing in Karuturi Global Ltd's shares. The investor also asked if there was any hope of a recovery of the stock which has plunged more than 90 per cent to Rs 3 apiece from Rs 38 in October 2010.

"Many people have lost money," says Karuturi. "I have a responsibility towards them."

Karuturi founded the company in 1994 to produce and export roses. Today, it has production bases in India, Kenya and Ethiopia with total annual capacity of 450 million rose stems. He diversified into agriculture in 2008, planning to grow food crops such as maize, rice and sugarcane.

The expansion, fuelled by debt, has yet to pay back and the bulk of the company's income still comes from flower exports. Rising debt and the slow pace of growth of the farm business have weighed on shares of the company, which has a market capitalisation of less than Rs 250 crore.

Karuturi blames the poor showing on three events: floods destroying his first maize crop in Ethiopia in late 2011, inclement weather in Europe hurting sales of roses in the last Valentine season, and the consequent cash crisis that led the company to defer redemption of overseas bonds in October 2012.

Analysts say the company's shares crashed due to its cash-flow problems and bulging debt. Karuturi Global's consolidated debt was Rs 753 crore as of March 2012, according to ratings firm ICRA Ltd. This is more than double the Rs 311 crore it had in March 2008. During the same period, net profit rose about 50 per cent while revenue climbed 63 per cent.

Shriram Subramanian, Managing Director at InGovern Research Services, a proxy advisory firm in Bangalore, says the company has stretched its balance sheet and has not provided for contingent liabilities such as disputed taxes of more than Rs 141 crore and statutory dues of Rs 15 crore.

Foreign institutional investors have, of late, been sceptical. They have slashed their stake in the company to 20.75 per cent at the end of 2012 from 28.04 per cent a year before.

In a bid to restore investor confidence and give them an option to exit, Karuturi says he is planning to make an open offer in May to buy shares. "We will launch the open offer as soon as statutory permissions are in place," he says. After the open offer, he might consider taking the company private. "At this (stock) price, it does not make sense to remain listed," he adds. Karuturi is also toying with the idea of listing in the Netherlands or Singapore instead.

"Agriculture stocks are valued better in these markets than in India," he says. At Rs 3, the Karuturi stock is trading at a price-to-earnings ratio of 1.88, indicating that investors do not expect high earnings growth in the future. Delisting the company, however, is not an easy task.

Stock-market rules require promoters to hold at least 90 per cent of a company to take it private. Promoters hold a 16.29 per cent stake in Karuturi Global, the company said in an email. "The promoter group can think of delisting only after they first acquire 75 per cent of shares," says Vivek Mallya, a chartered accountant in Bangalore. "They still have a long way to go."

Karuturi says he has sold a property in Bangalore's prime MG Road area for the cash he needs to first increase his stake and later fund the open offer. The company's financial health is also improving. It harvested its maiden maize crop in Ethiopia in the October-to-December quarter and business in the Christmas season grew. This helped sales expand 18 per cent from a year earlier to Rs 167 crore while net profit climbed 34 per cent to Rs 57 crore. "The past is behind us. We are well on course," he says. 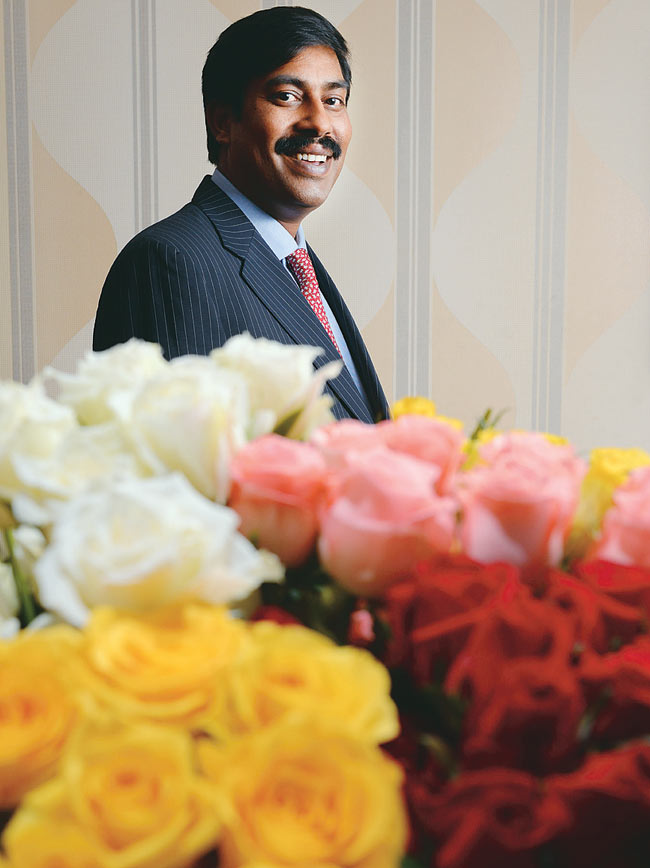 Karuturi Global founder Sai Ramakrishna Karuturi Phooto: Nilotpal Baruah
The company plans to plant rice, maize, jute and cotton this year. It has sewn up trade tie-ups with Saudi Arabia, Kenya, Sudan and Ethiopia for some crops. Karuturi says the company has 250,000 acres of land in Ethiopia's southwestern Gambella region, and has an option to double the area. It has invested about Rs 1,000 crore to grow crops on 100,000 acres of land and would need Rs 1,500 crore more by 2015. The company will arrange half the amount from internal resources and the balance through debt or equity, he says.

Still, some analysts are cautious. Karthik Rangappa, founder of the Bangalore-based equity research firm The Quant Lab, says there is little hope for the stock to move much higher at this stage. He adds that a chunk of Karuturi's estimated earnings of two years will be required to repay holders of its overseas bonds that it restructured in March. The outstanding amount on these bonds is $39 million (about Rs 210 crore) plus interest. Global financial giant Goldman Sachs Group holds nearly threefourths of these bonds.

The company will have to perform consistently to win back investors, says Nikhil Vora, Managing Director at IDFC Securities. "The big challenge will be generating healthy cash flows from the farm business."