Deputy Governor Subir Gokarn spoke candidly and in detail with Chaitanya Kalbag on the battle the central bank is doggedly waging against inflation and on the imperatives of a credible monetary policy.

Chaitanya Kalbag
One day after the Reserve Bank of India raised interest rates for the 11th time in 17 months, Deputy Governor Subir Gokarn spoke candidly and in detail with Chaitanya Kalbag on the battle the central bank is doggedly waging against inflation and on the imperatives of a credible monetary policy that has to be aggressive and single-minded in forcing the price trajectory downwards again. Excerpts from the exclusive interview: 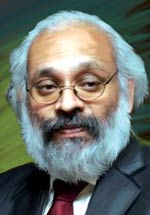 RBI Deputy Governor Subir Gokarn
On when RBI will pull back on its high interest rate curve:
Gokarn: Inflation over the past few months has been driven by a combination of two factors. There is still strong demand pressure in the economy and commodity prices have risen very sharply. That has reinforced the demand pressure, so we have had very visible passthrough of input price increases into general inflation. Obviously raising interest rates means trying to contain domestic demand, and as that containment works we should see inflation rates coming down in tandem with a little bit of a lag. The downtrend in inflation may be more moderate than it was in [the second and third quarters of 2008/09] but that is the basic process which we are visualising. We have said we expect inflation to start going down around November or December.

On RBI's stress on "credibility" of the credit policy:
Gokarn: I think we have to look at the May (policy) statement as a significant change in the pattern. When we moved from 25 [basis points] every six weeks to 50, then to 25 and now to 50 again, the May statement reflected a basic change in strategy driven by the fact that inflation had been a problem right through 2010 but somewhere around December or January it ratcheted up because of the impact of commodity prices. So at that point we had to take a view on … whether this could be transitory or more persistent, what the budget would do in terms of fiscal consolidation ….

In May, once the situation had become clearer, we decided to move to a different trajectory which is more assertive action. That was based on the understanding that not only was inflation higher because it had moved from an average of about seven per cent in the second half of 2010 to about 9.5 per cent, but it would also be persistent. That took us to the 50 basis points hike in May. Obviously we do not see adequate reason now to change that policy.

The surprise the markets manifested was perhaps based on the fact that they did not appreciate the full significance of the shift in May. Once you commit to a trajectory, there is an issue of credibility in sticking to it. Having moved to a stronger trajectory, it would be premature to withdraw from it at this stage saying circumstances have changed, because they haven't changed that much.

On the RBI single-handedly shouldering the burden of attacking inflation:
Gokarn: I don't think one would attribute these statements to frustration; they are based on realistic assessments that a number of different things have to be done in order to deal with the pressures that we are dealing with now, some of which are related very strongly to capacity bottlenecks in various sectors like food and infrastructure. I think the reality is that the less response there is on the supply side - as long as a demand-supply gap persists and inflation pressure remains - the risk of inflation spiraling increases, through the expectations and through the behaviour of workers or producers, as price-rise expectations get entrenched. So the monetary policy has to work even harder to offset those expectations. I think the metaphor of one wheel moving and the other stuck is a nice visual that could mean you end up going around in circles. But I think this is not an issue of circular motion … I think it's really an issue of offsetting or compensating. That is why we are emphasising the concept of complementarity, that it is only when supply and demand are more or less in sync that inflationary pressures start to abate.

On overheating:
Gokarn: I don't like to use the word 'overheating' because that would suggest a dire situation. I think we do have several demand-supply imbalances. We have pointed to food and infrastructure. There are demandsupply imbalances in labour as well. These are bottlenecks which can be addressed, not overnight, but in fairly short periods of time by policy action, budgetary commitments and so on.

On RBI being given a clear mandate:
Gokarn: I think it has always been an issue of priority. For a central bank the priority is always inflation. Of course you can make a very explicit commitment to that priority in the form of an inflation target and de-prioritise everything else, or you can try and balance that with other priorities so that there is no conflict between them. I would describe our ordering of priorities as inflation always, but if it can be reconciled with growth objectives then that reconciliation will be attempted. At this point, we clearly see that it is worth some slowing down of growth in order to bring inflation down from these levels, and that is the message we have been sending through our last two policy statements.

On whether there should have been bigger hikes earlier:
Gokarn: I think we have to keep in mind that this is not a continuity of an inflationary process. There was a distinct break in the inflationary process in December-January. Up until December if you look at the headline numbers there was stability, and our core inflationary measure - non-food manufactured products - was actually starting to come off a little. So we hadn't stopped our calibrated action, although we actually paused in December. So the calibrated action was warranted and part of this was motivated by signs from the IIP [Index of Industrial Production] that there was some moderation in industrial production. But the ratcheting, the point of inflexion occurred in January, when the combination of domestic demand and commodity-price inflation took the inflation number to a different trajectory altogether. Had we anticipated this commodity price spiral, perhaps the action could have been front-loaded, but we were operating under a different set of conditions in 2010, to which we felt the most appropriate response was this calibrated action. But then the inflation number went up very sharply, and in response we had to re-think our strategy, which we did.

On setting the inflation target at 7 per cent for March:
Gokarn: It is not a target, it is a projection for the year end. Implicit in that story is that, once it starts settling down, it will continue to trend down, so March is not the end of that process. At this point we expect that trajectory to start around November or December, so we are looking at relatively high inflation numbers up to that point. We do have a roadmap in place, and we have said we will review our stance when we see this trajectory manifesting.