A day after his half-yearly monetary policy review, Reserve Bank of India (RBI) Governor Duvvuri Subbarao met with Chaitanya Kalbag and Anand Adhikari to explain the intent of the bank's policy actions.

Anand Adhikari / Chaitanya Kalbag
A day after his half-yearly monetary policy review, Reserve Bank of India (RBI) Governor Duvvuri Subbarao met with Chaitanya Kalbag and Anand Adhikari to explain the intent of the bank's policy actions. He also spoke about the growth-inflation debate and the perceived differences between the central bank and the finance ministry. Edited excerpts:

What has made you so resolute in the face of so much pressure to lower interest rates?
First of all, I want to say that all the criticism that we face is legitimate criticism, it is par for the course. Criticism is value adding, so I have sympathy for it. But there are different points of view. Also, it is not correct to say that inflation has not come under control. It has not come down as much as we want, but certainly it has come down from the high of 10.9 per cent in 2010 to 7.5 per cent, averaging over the last several months. We need to bring it down - this is a poor country and inflation is a regressive tax on the poor. I believe it is possible to bring inflation down through monetary policy action supplemented by supply response from the economy, which has to be managed by the government. 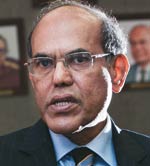 Our growth has moderated and inflation has been stubborn. The output gap is quite small and it is shrinking.
What do you expect in terms of a supply response?
First, on infrastructure. India is unique in the sense that we are one of the economies in the world that is supply constrained. There is shortage of infrastructure both in quantum and quality. We need to improve that so that corporates become more competitive, so that economic production becomes more competitive.

Second, we need to improve supply of food, especially of protein foods. There were some initiatives in last year's budget, and also in this year's budget, to encourage more efficient production of food - protein, pulses, edible oil etc…

That must be taken forward.

Third, is skilled labour. It is one thing to have a huge labour force but another to have a labour force that is not adequately skilled. The skill shortage is going to be a big threat. We need to focus on that. These are some of the important supply constraints.

When you talk about fiscal profligacy and fiscal control, what do you think is not happening quickly enough? What steps do you want to see?
We have said earlier that announced policies must be translated quickly in order to inspire investment. From the RBI, I do not have a very good sense of what is happening in the field. But from what we hear and what we read, we gather that there are delays in getting permission and approvals. There are delays in getting land. These are essentially governance problems and they need to be resolved in Delhi and the state capitals, and most importantly, at the district level. Then, all the linkages; we talk about so much installed capacity lying idle in the power sector because the linkages have not been established. We need to do that.

In the first instance, since you asked me what can be done in the short term, we must be focusing on those which give us largest marginal returns. Whatever capacity is already installed must be put into production.

Do you feel there is a danger of stagflation occurring? How real is that fear?
I don't think the fear is real. Stagflation is characterised by low growth and persistent high inflation. Admittedly, our growth has moderated and inflation has been stubborn. But you must also recognise that the output gap that we see is quite recent. It is quite small and it is shrinking. So, it will be incorrect to say that we are in a stagflation situation. 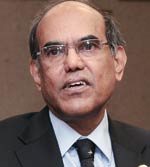 Do you feel that there needs to be some austerity?
Austerity is always important. Austerity is a value. But when you look at in terms of numbers, savings that austerity can get are quite small. But, as a value, we should promote austerity.

Your projection of 7.5 per cent inflation in 2012/13 is higher than your comfort level. We have a bunch of elections coming up and quite obviously the next budget cannot be but populist. How are things going to get better?
I have no specific response to that characterisation of the political economy situation. When I was speaking about austerity earlier, I was speaking with reference to the austerity measures the government institutes and not in the larger context of fiscal austerity, as is being spoken about in Europe today. If in Europe, it is fiscal austerity versus growth, I believe that in India, it is fiscal austerity for growth. We need fiscal consolidation. That will help rein in inflation. That will make available credit for the private sector. So, the government must spend only in those areas where it needs to spend. Beyond that the government must leave it to the private sector.

Finance Minister P. Chidambaram says we have to worry about growth as much as inflation.What's your thinking on this?
We tend to oversimplify this. That it is growth versus inflation - if you want growth, you have to sacrifice inflation or you have got to tolerate high inflation. I don't think we must define the debate on those terms. The terms of the debate must be changed. We must all understand that low and steady inflation is necessary for securing our medium-term growth. Only in an environment of low and steady inflation can consumers, and more importantly, investors, make informed decisions. And that's very important to keep good growth. RBI's effort at reining in inflation is not to the exclusion of growth but very much focusing on growth.

So, do you feel very lonely right now?
I don't feel very lonely. I think people are making too much of the finance minister's response to our policy action. After all, we have shared goals. Both of us want high growth and low inflation. And there is a division of responsibilities. There is a point of view that we must walk together. But, you know, what is called walking together is understood differently. I think that will be resolved in the course of time.

Given the widening fiscal deficit, is there any room for a rate cut in 2013/14?
I think 2013/14 is a long way off to stick my neck out. It will depend on how growth and inflation pan out in the course of 2013/14. We have given guidance for the last quarter, to say that there is scope and opportunity for further easing if inflation and growth move along the expected trajectory. We will give out the numbers for 2013/14 in April, but my uninformed view at this point of time, is that growth will increase, inflation will start declining even more rapidly, and that we will be moving towards a more conducive macroeconomic environment in 2013/14.

It is quite extraordinary that you are almost predicting a cut in the first quarter of next year. Is that usual?
It is not usual for us, but that was deliberate. We started giving guidance, consistent with the best practice of central banks around the world. In an uncertain situation, giving guidance becomes more challenging. But in an uncertain situation, giving guidance becomes all the more necessary. Central banks in advanced countries, particularly in the US, give a very definitive guidance about the policy interest-rate regime for the next two years, in order to manage the growth process. Similarly, in giving guidance for the fourth quarter, we decided that we must be as definitive as possible. Because even as we maintained an anti-inflation stance in this policy, we wanted to say that we are concerned about growth, and within the scope available, we will support the growth process. So, it is important to give that guidance and that's why we did it.

While inflation of food items has fallen, it is going up for manufactured products…
We continue to be concerned about food inflation because if you just look at the food basket, even as vegetable prices have come down, prices of cereals have gone up. Protein inflation is still high. On the food side, there is a structural factor which we must address. That will be the sustainable solution to the food inflation problem.

On non-food manufacturing inflation - core inflation - metal prices have gone up, and, in general, input prices have gone up, because many of them are imported and the rupee has depreciated, so there is inflation coming in from there. It's important that global prices soften and it's important that our exchange rate is stable, so that the cost-push pressures from imported inflation are not transmitted to the domestic economy.

But globally it doesn't look like things are going to get better in a hurry…
Absolutely, especially on the food side. In large foodproducing countries, there is a drought-like situation, there are price pressures. Our food market is quite closed, but some of this global pressure will transmit to domestic prices, especially on items that we import, such as edible oils, but even on commodities that we do not import.