News
Magazine
Features
Reliance Life Sciences may have had an indifferent past, but its future is bright

Reliance Life Sciences may have had an indifferent past, but its future is bright

Reliance Life Sciences may have had an indifferent past, but its future is bright. Biosimilars are widely expected to be the next big growth driver in pharmaceuticals, given that around $80 billion worth of innovator biological drugs will be going off patent by 2015.

RLS has been developing biotechnology-based products and services in multiple medical domains. It is today at an inflexion point: Mukesh Ambani
Suman Layak / Geetanjali Shukla
If asked to list the sectors the Mukesh Ambani-led Reliance group is involved in, only a few would include bio-technology and pharmaceuticals. Yet the products and processes of Reliance Life Sciences Pvt Ltd (RLS), a private investment of the older Ambani brother, are probably at a higher level of the value chain than those of any other company in the group.

"Reliance Life Sciences has been developing biotechnology-based, therapeutic products and services in multiple medical domains," Ambani told BT in an e-mail response. "It is today at an inflexion point in taking these niche products to address unmet medical needs."

No doubt this is a sector very different from petrochemicals or plastics, which have raked in the billions for Reliance. Besides, RLS expended much of its energies in providing supportive research for other companies in the group - indeed, it was started to carry out research on biopolymers for Reliance Industries Ltd (RIL). It also meandered into too many areas. The inflexion point Ambani spoke of refers to the sharper focus RLS has been trying to acquire in the last two years.

Almost since its inception, the company has been headed by K.V. Subramaniam, a chemical engineer by training, who was formerly with RIL. "My current mandate from Mukesh Ambani is to focus on medical biotechnology and other medical areas only," he says. Accordingly the non-medical products RLS was making have been taken over by other Reliance companies: its bio-polymers and bio-fuels have gone to Reliance Industries, while the plant biotechnology business has been shifted to Reliance Foundation. The only exception is the mango drink Rellure, which it still makes.

With the products that still remain with RLS, the new imperative is scaling up. The financials for 2011/12 have not been made public yet, but Subramaniam maintains the company has left its losses behind and made a profit. "Mukesh Ambani always told me that to scale up we need to focus on manufacturing," he says. Accordingly capacity is being ramped up at the company's production site at Rabale in Navi Mumbai.

The new seriousness is exemplified by Subramaniam's decision to give up his position on the RLS board, as well as his directorships of the Insitute of Chartered Financial Analysts of India and the US India Chamber of Commerce to concentrate on his executive role. Next year he plans to start setting up a new biosimilars plant. "We will look for a location where it will be easy to hire professionals for our industry, perfhaps Bangalore or Hyderabad," he says. Ambani has promised him land from Reliance's vast land bank.

Untold success story
But modest financials do not tell the entire RLS story. Around 60 per cent of its revenue comes from a single source - human plasma proteins products. These are proteins extracted from human blood, which, externally administered, help to clot blood and heal wounds. Currently, RLS is among the big companies in this segment with Baxter India and Bharat Serum and Vaccines as its main competitors.

Industry sources reveal that RLS disrupted this market twice with its products Alburel and Immunorel. Alburel, for instance, a plasma volume expander used to treat burns, was launched in 2005 at a much lower price than the competition. The result was that the market grew almost 400 per cent from Rs 200 crore to Rs 1,000 crore at present. 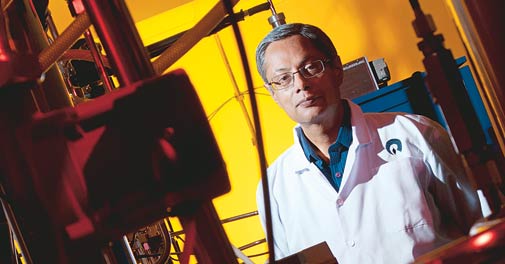 My mandate from Mukesh Ambani is to focus on medical biotechnology and other medical areas only: K. V. Subramaniam
Another 20 per cent of RLS's turnover comes from biosimilars . These are improved versions of innovator biological drugs after the patent on the original drug has expired. Biosimilars made their great leap forward at RLS after the company bought a 74 per cent stake in Genemedix PLC, the Ireland-based pharmaceutical company which is listed on the Alternative Investment Market (AIM) of the London Stock Exchange. With seven biosimilars in the market and another 19 in the pipeline, RLS today has the biggest biosimilar portfolio in India. The first step to scaling will be to increase the manufacturing capacity of both plasma proteins and biosimilars within a year.

Biosimilars are widely expected to be the next big growth driver in pharmaceuticals, given that around $80 billion worth of innovator biological drugs will be going off patent by 2015. And RLS is well placed to benefit from the boom. "RLS has the richest pipeline in the country in monoclonal antibodies," says a former employee. "It is present at the upper end of the biosimilars spectrum, which few Indian companies have reached. If it can launch its biosimilars in the timeline it has chalked out, it can strike gold."

(Monoclonal antibodies are biotechnology tools which deliver drugs only to disease causing bacteria, instead of all human cells. They are used mostly in cancer and rheumatoid arthritis treatment.) An industry source close to the company agrees. "RLS has at least two drugs that can be Rs 100-crore revenue products. It is a matter of backing them properly," he says.

Yet RLS's revenue from biosimilars lags well behind that of biotech giants like Biocon, Ranbaxy and Dr Reddy's. Why so? Analysts believe it is because the company does not have the high-revenue insulin biosimilars in its portfolio. RLS has decided it will remain that way.

"We do not look at insulin because the market is already saturated," says Vikram Paradkar, who heads the biosimilars business at RLS. But even without it, RLS's income from biosimilars doubled in the past year, and is expected to grow 40 to 50 per cent in the next few years. Developing biosimilars, however, calls for generous funding.

And so far, the cash rich Reliance group has been surprisingly parsimonious towards RLS. "Biological drugs can be a profitable model if you get them right. It is a high riskhigh reward space. Biosimilars have higher value than generics but developing them requires deep pockets," says Ajit Mahadevan, Partner-Life Sciences, Ernst and Young.

Pharma foray
RLS also has a presence in pharmaceuticals and clinical research. It claims to have one of India's few fully integrated clinical research facilities, where it carries out both drug and medical equipment development as well as clinical trials and market research for drug development companies. At one stage, in 2007/08, there was even talk of RLS acquiring Cipla or the Gujaratbased Torrent Pharma, but nothing materialised. However, rumours regarding Cipla have again surfaced.

"The corporate philosophy is not for acquisitions," says Rahul Padhye, Head, Corporate Development who also heads RLS's pharmaceuticals business. "The focus going forward will be on difficult-to-make cancer drugs." In pharma too scaling is in the offing, with RLS commissioning a new injectables facility at Rabale this September.

RLS has so far been funded by preference shares and loans from Mukesh Ambani owned entities. In March 2011, it had Rs 550 crore worth of zero-coupon optionally convertible loans from various Reliance companies on its balance sheet.

In January 2012, it borrowed another Rs 138 crore from Canara Bank. Subramaniam insists that all the loans are to provide working capital only and that Ambani has expressly asked him not to borrow to fund the expansion. Indeed, sources indicate that Ambani invested regularly in the company till 2008, but thereafter funding has been less generous. Why this reluctance to invest when the rewards can be so high? "RLS tried to play a pharma hand without hiring adequate manpower," says an industry insider. "After being aggressive for a while, it cut down on spends."

Six years ago, at the 32nd annual general meeting of RIL, Ambani spoke of three new "broad fronts" Reliance would be interested in: urban infrastructure and special economic zones, cross border acquisitions and life sciences and healthcare. The first has run into all kinds of problems and has practically been given up on; the second has yet to make any impact. But on the third front, RLS offers a first rate springboard, and it is up to Ambani to take full advantage of it.