Developers grapple with the financial fallout of less-than-expected traffic

The developers are grappling with financial fallout of less-than-expected traffic. Competition is also making things harder for them.

Developer IL&FS Transportation Networks had to restructure debt for the Delhi-Noida toll road within 18 months of commissioning it.
G Seetharaman
On a warm Sunday morning, traffic noise envelops the toll plaza at Khanivade, north of Mumbai, on National Highway 8. For all the noise, traffic on IRB Infrastructure Developers's Rs 2,835-crore road from Dahisar, Mumbai, to Surat in Gujarat is sparse. A toll collector warns Business Today not to take pictures. One of his colleagues says traffic from Surat fell 30 per cent in the past year as another road is being developed.

10.16% is the average growth in the number of vehicles in the last five years

A flyover coming up at Thane has affected northbound traffic. "We could not factor this into estimates because MSRDC made this plan only last year," says Virendra D. Mhaiskar, Chairman and Managing Director of IRB, one of India's biggest developers. MSRDC is Maharashtra State Road Development Corporation.

The daily toll collection on IRB's Mumbai-Surat road averages Rs 1.15 crore to Rs 1.2 crore - better than the Rs 91 lakh figure for 2009/10, but still below estimates. The first-year collection was 40 per cent below projections, which Mhaiskar attributes to the economic downturn.

Traffic overestimates on several roads could hurt developers' revenues. IRB has not had to restructure debt for the Surat-Mumbai road, but some others may not be that lucky. A March 14 report by Fitch Ratings India says there is "systematic traffic volume overestimation" on some highways. Of the 10 operational projects discussed in the report, four had first-year traffic that was more than 35 per cent below estimates. Traffic on two more roads fell short by 20 per cent. Click here to Enlarge
Among the earliest companies to wake up to traffic overestimates was IL&FS Transportation Networks Ltd (ITNL). Three of its projects had to restructure debt within 18 months of being commissioned in the early 2000s, as traffic was below estimates. One was the Delhi-Noida toll bridge. ITNL Managing Director K. Ramchand says traffic on all three stretches now meets or exceeds original estimates. "Traffic estimation is an art," he says. "If a developer gets it 100 per cent right, it's a coincidence." However, experience has made ITNL cautious.

Arun Kumar Sharma, CEO, Highways, GMR Group, says: "Traffic may not be great in the first year, but will improve over time." But the Fitch report says "first-year actual traffic levels are a strong indicator of the accuracy of traffic forecasts and hence of a project's prospects".

Shyamali Rajivan, one of the report's authors, says most underperforming road projects rated by Fitch have met debt service obligations with infusions of sponsor support. "But I would not rule out the possibility of future restructuring," she adds. 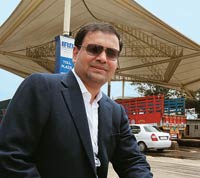 In planning the Mumbai-Surat road, we could not factor in the Thane fl yover, as the state planned that only last year: Virendra D. Mhaiskar
GMR's Sharma says his company has not had to restructure debt for projects that fell short of estimates (see Warning Signs, page 82). However, Rajivan of Fitch says smaller developers may be unable to raise more equity or unsecured loans. Fitch does not name the underperforming projects in its report, but in the past it has rated highways with traffic issues, including the Komarapalayam-Chengapalli road in Tamil Nadu, owned by IVRCL Assets & Holdings, a subsidiary of IVRCL. In 2010/11, its first full year of operation, average daily toll collection was more than 40 per cent below estimates. IVRCL, which is merging IVRCL Assets with itself, wants to divest road assets to reduce debt. Analysts say poor traffic on some of its roads may also be a reason for the plan to sell them. IVRCL Assets's Managing Director S. Ramachandran denies this. "We want equity to invest in new projects," he says, adding that the Komarapalayam road still has issues, while daily collection on the company's Jalandhar-Amritsar road has improved. Interestingly, the Essel Group has acquired 12.3 per cent of IVRCL.

Before bidding, road developers hire consultants to observe the road for seven days and gather data about the traffic on it. This data is used together with economic growth projections to gauge traffic over the project's lifetime. Parvesh Minocha, Managing Director, Transportation, at Feedback Infrastructure Services, says accurate estimation is often difficult. "Many stretches are being tolled for the first time," he says.

Highway traffic growth has averaged over seven per cent a year in the last three years. "Traffic underperformance will become a more serious issue, as some projects have been won at high prices," says an analyst with a domestic brokerage who does not want to be named. This can be risky, as project size has grown, too. Last year, GMR reportedly offered NHAI a premium of Rs 636 crore for the Rs 5,700-crore Kishangarh-Ahmedabad road - Rs 120 crore higher than GVK Power & Infrastructure's offer.

M.S. Raghavan, Executive Director, Bank of India, says his bank has become choosier about the developers it lends to. NHAI, which awarded nearly 8,000 km of roads last year, is targeting 8,800 km in 2012/13. Given the competition, developers must win projects steadily while reining in their optimism.