In five years, Sanjiv Bajaj comes into his own

Though profits at Sanjiv Bajaj's financial services business are increasing rapidly, but the younger scion still has some way to go to catch up with elder brother Rajiv's auto business.

Choosing when to grow, and growth of the right quality are also important parts of strategy: Sanjiv Bajaj <em>Photo: Rachit Goswami</em>
Anand Adhikari
He began his career on the shopfloor of Tata Motors before joining the family firm, Bajaj Auto. At that point, Sanjiv Bajaj must have assumed he would spend most of his life among vehicles, be they of the four-wheeled or two-wheeled variety. But in December 2007, Rahul Bajaj's younger son shifted gears altogether and took control of a completely new portfolio of businesses - financial services.

He took charge as managing director of Bajaj Finserv soon after. The big change came after Bajaj Auto was demerged into three separate companies in 2008 - Bajaj Auto, Bajaj Finserv and Bajaj Holdings. As part of the deal, Sanjiv, an MBA from Harvard Business School, took charge of the financial services side of the business while elder brother Rajiv ran the automobiles business.

It was not an easy transition. Sanjiv, who had also studied mechanical engineering and manufacturing, was thrown into a business in which the group had no experience. The first year after he took charge of Bajaj Finserv Ltd, its financial firm was deep in the red. Rajiv's more highprofile Bajaj Auto, on the other hand, was a profit-making firm riding on the success of its iconic two-wheelers.

"Five years ago, when we started looking at financial services, what we had was a small mono-line company, Bajaj Auto Finance, financing autos. We had two insurance companies in different stages of growth. That was really all our presence," says Sanjiv. But the younger Bajaj scion, who practises yogic breathing exercises that help him tap his inner energy, has come a long way in the past five years. His business philosophy of focusing on the long-term but not losing sight of profitability is paying off.

Today, Finserv is fast catching up with Rajiv's Bajaj Auto: the firm with a finger in both insurance and lending has seen a huge turnaround from a loss of Rs 32 crore in 2007/08 to a profit of Rs 1,338 crore in 2011/12. In comparison, Rajiv's auto business profits have jumped four times from Rs 726 crore to Rs 2,990 crore during the same period.

"We don't want to act like venture capitalists. We'd rather focus on the long term and build businesses which we think have tremendous value," says Sanjiv, sitting in his swanky sixth-floor Pune office. "Choosing when to grow, and growth of the right quality are also important parts of strategy."

Kevin D'Sa, an old loyalist who still splits his working day between the Bajaj brothers' businesses, says Sanjiv's empire will have assets of over Rs 100,000 crore in the next 10 years. Bajaj Finance Ltd, the lending arm, had assets under management of little over Rs 13,000 crore in March 2012, while the group says it has assets of nearly Rs 60,000 crore. "Sanjiv, who is 43 today, is here for the long haul," 58-year-old D'Sa adds.

D'Sa began his career with the unified Bajaj Auto when the Bajaj scions were in their teens. Today, he wears two hats: he is President (Finance) at Rajiv's Bajaj Auto, as well as Chief Financial Officer and President (Business Development) at Sanjiv's Bajaj Finserv.

"A part of me was also split up. I spend 75 per cent of my time at Bajaj Auto," he says, sitting at the Bajaj corporate office at Akurdi on the outskirts of Pune. But he also works closely with Sanjiv in exploring new opportunities. D'Sa says Sanjiv is a manager who delegates, but does not abdicate. "At the operating level, decision-making is quick," he says.

"Rajiv Bajaj believes, convinces himself and drives a business. Sanjiv goes a little more with consensus." A sports freak whose interests range from basketball to tennis, Sanjiv thinks out-of-the-box professionally and personally. He prefers, for example, to listen to audio books and is listening to The Signal and the Noise by Nate Silver, a book that involves 60 hours of listening. "After doing my phone calls and meetings, I take out time. I finish a book in three to four weeks," says Sanjiv. Despite the turnaround, Sanjiv has a lot of catching up to do with his brother in terms of market capitalisation.

But Sanjiv is not daunted by such comparisons. His mantra is to have a differentiated strategy and cautiously scale up his businesses. So, while he is in the process of tweaking the wealth management business strategy, the mutual fund business is still on the drawing board. The slow-and-steady approach is also reflected in Sanjiv's strategy for the insurance business. 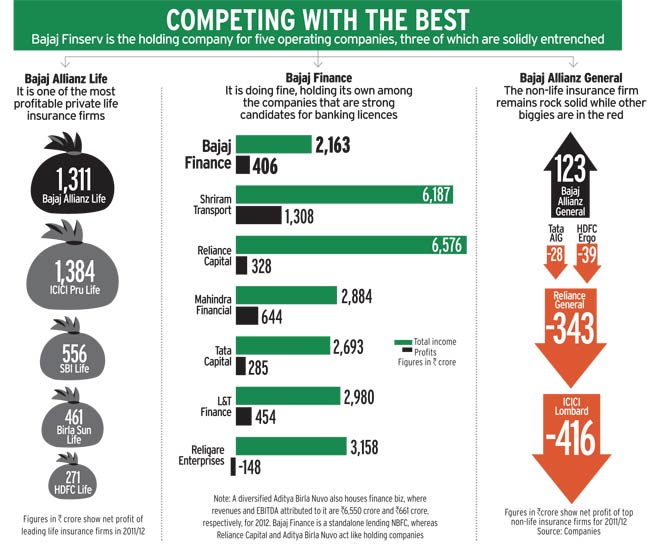 He took a conscious decision to slow down the business from 2008 because, unlike manufacturing, the sector is dependent on the regulatory environment. The gross premium of Bajaj Allianz Life Insurance fell from Rs 11,420 crore in March 2010 to Rs 7,484 crore in March 2012. "The business was falling because we were letting it fall," says Sanjiv.

Sanjiv makes it a point to spend time interacting with financial regulators. He says the nature of auto manufacturing is different because, once emissions and sound rules are followed, the product can be manufactured without fear of regulations changing.

His strategy has paid off. The 10-year-old Bajaj Allianz Life Insurance is the second most profitable insurance firm, while ranking fourth in first-year premium collections. "We managed to maintain our profitability," says Sanjiv whose focus in general insurance is more on retail than on corporate business.

Sanjiv believes there should be no chasing of market share at the cost of profits. Rajeev Jain, who heads Bajaj Finance Ltd, a non-banking finance company (NBFC) focused on consumer lending and commercial loans, says Sanjiv always asks two questions about any fresh business proposal. Can it scale to become a billion-dollar business? And, how will it be different from others in the same field? "Once broad goals are set, he gives the operating CEO a free hand" says Jain.

Despite his generally measured strides, Sanjiv has moved fast at Bajaj Finance. At a time when other NBFCs shut down or withdrew from the retail business, Bajaj Finance has expanded its product line from two products five years ago to nearly a dozen in 2012. The company has grown its assets to Rs 13,107crore, profits to Rs 406 crore and top line to Rs 2,163 crore as on March 2012. 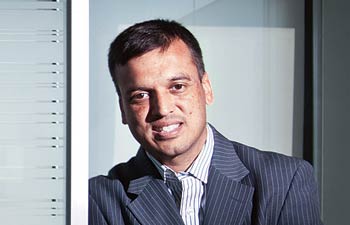 Once broad goals are set, he (Sanjiv) gives the operating CEO a free hand: Rajeev Jain
Five years ago, 80 per cent of Bajaj Finance's business focused on auto financing, but Bajaj Finserv's lending arm is no longer dependent on Bajaj Auto customers. The business has seen new product lines such as loans to small and medium enterprises (SMEs), business loans, construction equipment financing and infrastructure financing. Today, SMEs have a 28 per cent share in the lending portfolio, followed by equipment and infrastructure financing at 27 per cent. Cross-selling is the central framework of Sanjiv's financial services business. "The target for cross-selling is to have two products per customer in the consumer business and five products per customer in the SME business," says Bajaj Finance's Jain.

In wealth management, too, Sanjiv is bringing in the cross-selling model. A year-and-a-half ago, Sanjiv launched the advisory and wealth management business targeting the middle class. The strategy is to do it small, test the product, learn and then scale up rapidly. "We are tweaking the business model as the cost of acquisition is very high in a push model," says D'Sa.

Sanjiv's biggest bet is to get a banking licence to scale up his lending businesses. "The business is not hampered today because of lack of licences," he says. "But a banking licence makes a sense in the long term, say 10 years down the line."

But he is still not in a hurry to launch new businesses. The mutual fund business, for instance, which got the Securities and Exchange Board of India's clearance a year ago, has yet to start. Insiders say the group is considering acquring a mutual fund to build scale.

For Sanjiv, funds are not a constraint. Bajaj Holdings & Investment Limited - the holding company created following the demerger - has all the investments and cash balances he would need. It also owns 31 per cent of Bajaj Auto and 39 per cent of Bajaj Finserv. "The market value of Bajaj Holdings & Investment is close to Rs 28,000 crore," says D'Sa, who also manages the treasury of this third company. In addition, Bajaj Finserv has reserves and surpluses of its own of over Rs 5,000 crore.

If the banking licence comes through in 2013, Sanjiv will be en route to creating a truly powerful Bajaj brand in the financial services business. And this lanky sports enthusiast knows very well that profits will flow in once he has the right people and strategy in place.