Sanjiv Goenka, unlike his forefathers, prefers to build companies rather than acquire them.

Sanjiv Goenka, chairman of RP-Sanjiv Goenka Group
Somnath Dasgupta
They hanged him in the morning, right at the entrance to Victoria House, as the grand building housing CESC's headquarters was then known. He was just 14 months into his job at the time, director of the company he had bought secretly against his father's wishes.

"My first reaction was stunned disbelief," says Sanjiv Goenka, then a 29-year-old. "I cannot read Bengali well, so I asked the man at the gate to read out the words on the poster alongside the effigy that had been hung at the gate." A shaken Sanjiv rushed to his office on the second floor and called his father's friends to ask for advice on how to tackle such aggressive union politics. "All of them gave me very practical advice," he says.

Yet not for nothing was Sanjiv the son of Rama Prasad Goenka, grandson of Keshav Prasad Goenka and the great grandson of Sir Badridas Goenka, the first Indian Chairman of the Imperial Bank of India. Very soon, he won over the unions by instilling in all employees a sense of pride in belonging to what was then known as the Calcutta Electric Supply Co.

He managed the unions so well that four or five years later, he was able to trim the workforce by 3,500 people in a single day without anyone protesting. When the Goenkas took over CESC, the company that supplies electricity to Kolkata was a moribund business. The government's attitude to the private sector playing any role in power generation was far from encouraging. Yet today, CESC is the flagship of Sanjiv Goenka's Rs 9,000-crore business empire.

MUST READ: Sanjiv Goenka on his leadership style

But CESC is no longer synonymous with RPG Enterprises, which for long was the umbrella brand for the companies run by Sanjiv, 50, and his Mumbai-based elder brother Harsh, 53. In 2010, their father Rama Prasad 'RP' Goenka, who had expanded the business empire with a series of takeovers, formally divided his companies among his two sons. Sanjiv got CESC, Spencer's, Phillips Carbon Black, Saregama and a part of Harrisons Malayalam.

While the split was RP's decision, the creation of a new logo was Sanjiv's idea. But the split and the new identity - RP-Sanjiv Goenka Group - have not been followed by a big bang of new initiatives. Sanjiv has been taking various initiatives steadily over the past decade, though without the flourish of his father. 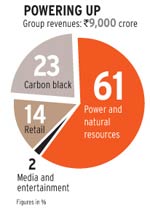 After taking over the reins at CESC in 1989, Sanjiv spent the 1990s preparing the company for the big leap from being Kolkata's much-reviled utility - long power cuts had become the norm in the city - to setting up projects across the country: in Jharkhand, Maharashtra and Noida in the National Capital Region. At the same time, he kept growing his carbon black operation as well, Phillips Carbon Black Ltd, which is now India's largest and the world's eighth-largest.

His group today operates in five sectors: power and natural resources, carbon black, retail, media and entertainment, and infrastructure. It is aiming to raise its revenues nearly three times in the next five years to touch Rs 25,000 crore.

Sanjiv's business inheritance was essentially what he calls "heritage companies". In 1979, RP and his two younger brothers Gouri Prasad and Jagdish Prasad decided to formally split the business empire their father Keshav Prasad had handed over to them to run. Keshav Prasad built his reputation with the takeover of Duncan Brothers, a British trading house.

RP took Phillips Carbon Black, Asian Cables, Agarpara Jute, Murphy Radio and Gramaphone Company of India - later renamed Saregama. He had by then already built a reputation as a takeover man, having quietly bought Ceat Tyres in 1981; Dunlop, with the help of Manu Chhabria, in 1984; and Gramaphone Company of India, in 1988. In 1971, he had also tried to buy Bombay Dyeing, which had been put on the block by Neville Wadia, but was foiled by Nusli, Neville's son.

Sanjiv first worked in Hyderabad, then returned to Kolkata as Deputy Managing Director of Dunlop, in which the Goenkas and Manu Chabbria had bought a 9.8 per cent stake. "Dunlop was a sick company when we bought it.

And then it started doing well," recalls Sanjiv. "As a youngster, it gives you a kick when you are able to resolve a longstanding problem, apart from building your confidence." But he quit Dunlop soon after turning it around, taking almost the entire senior team at the company with him, after he fell out with Chhabria. "Out of the 46 executives at the general manager level and above, 41 walked out with me," he says. Sanjiv recalls how, in 1989, C.K. Dhanuka, now Chairman of South Asian Petrochemicals, was looking for a buyer to offload a packet of CESC shares. Sanjiv saw an opportunity and bought the shares without telling his father, who had earlier spurned the offer. CESC, set up in 1899 in London, had become a rupee company by then, but the management was directionless. After Independence, the government had not encouraged the private sector power utilities, and CESC did not create any new capacity for the next four decades.

"Yes, CESC was small. It was bad. It was inefficient. The turnover was Rs 300 crore, profit was Rs 5-6 crore," Sanjiv says. "There used to be 10 to12 hours of power cuts every day. But it's been a very interesting journey, filled with lots of challenges, not the least that of getting the team at CESC to rally behind me, to work with me, and to respect me." It took Sanjiv almost a decade to turn the company around, and give employees a sense of direction, adding capacity along the way, and fighting battles with the government to raise tariffs.

"We want CESC to be among the top five private players in power in the country," says Sanjiv. "In fact, we are already among the most efficient utilities." Three of CESC's stations are in the top 10 of the Central Electricity Authority list of private power utilities, by plant load factor, the industry's term for capacity use. The capacity goal is 7,000 MW, against 1,225 MW CESC has at present.

Microsec Chairman B.L. Mittal feels Sanjiv's Phillips Carbon Black, a 50-year-old company in the industrial town of Durgapur in West Bengal, also has bright prospects. There is strong demand from the tyre industry for carbon black, which is made from petrochemicals. The company also exports significant quantities of it.

"While petrochemical prices have gone up, demand for carbon black has also grown," says Mittal. Tucked within CESC, as a fully-owned subsidiary, is also a business with increasing consumer connect: Spencer's Retail. "In terms of revenue per square foot, which is the barometer of the retail trade, Spencer's earnings are probably the highest in the food retailing industry," says Sanjiv. What about Food Bazaar? "We are talking of revenues per square foot, not total revenues," he retorts. Gaurav Dua, Head of Research, Sharekhan, agrees.

"Food Bazaar on an average clocks around Rs 12,000 sales per sq ft, We believe Spencer's also clocks similar revenue per sq ft after the recent consolidation of stores and other initiatives taken to improve its revenue mix." Can Spencer's scale up significantly and gain from foreign direct investment in retail? Dua notes that Spencer's could be an attractive investment option for multinationals. For now, Sanjiv is not wor rying too much about his shareholders.

"In terms of operational performance, we are clearly the best in the industries we operate in - be it CESC, Phillips Carbon Black, Spencer's or Saregama," he says. It is the pace of growth that is important. Says Sanjiv: "In five years, our target is for revenues to rise to Rs 25,000 crore and assets to Rs 50,000 crore. There is a Rs 35,000-crore capital expenditure plan."

Where will the money come from? "Our debt ratio at no stage will go beyond 1.2:1, and internal accruals at CESC will be enough," he says. "Over the next six years, the group will generate internal accruals of nearly Rs 9,000 crore." Of this, Rs 6,500 crore will come from CESC, and Rs 2,000 crore from Phillips Carbon Black.

Sanjiv does not consciously take into account his brother Harsh's empire as he goes for growth, but the links between their businesses will stay. So Harsh buys carbon black from Sanjiv for CEAT's tyres business, while Sanjiv uses Harsh's transmission towers and cables. "It's an arm's length relationship. All things being equal, we give each other priority," says Sanjiv.

As Sanjiv builds on his heritage, people who have worked with him, as well as with RP, say the son has inherited many traits from his father, even though the acquisition gene has been passed on in a much more subdued form. "Well, my father was very famous. I am not very famous. So that's one thing I have certainly not inherited," says Sanjiv.

What role will Sanjiv's children play in the business? While unveiling the new logo in July, Sanjiv also publicly introduced his son Shashwat, 21, who is currently doing a triple major at Wharton Business School in the US. Shashwat's birth almost coincided with the CESC takeover, and his childhood ran alongside CESC's difficult decade. "Neither I nor my wife have ever sat down with our children [they also have a daughter, aged 26] to help with their homework," says Sanjiv. "I believe that if you spoon-feed a child, he or she will never learn to be decisive."

He follows the same policy with the senior officials at his companies. "Our CEOs are fully empowered, and they are very capable… They take the operating decisions," he says. "But if any company goes under, it will be because of me, because ultimately the decisions are mine."

While Saregama and Spencer's are two retail brands familiar to most people across the country, Sanjiv has chosen CESC as the platform for his biggest national play.

"You have to grow beyond one city," he says. "One city, no matter how attractive, offers only limited opportunities." "We want to be among the top five private power players in India… players such as the Tatas, Reliance, Lanco and Adani," says Sanjiv. Getting there does not look difficult, with the new power plants and distribution zones. The independent power projects at Chandrapur in Maharashtra, and Haldia in West Bengal are being built.

Another project in Orissa is under process. For now, Sanjiv can clearly push ahead more aggressively with his own identity. As Vivek Saraogi, Managing Director of Balrampur Chini, says: "I see him growing… When you are responsible for only yourself, your risktaking ability goes up." Saraogi, 45, is more of a family friend, but the two do discuss business. What Sanjiv will not do for certain is make flashy moves. "His style is understated, he is not the boastful type at all," says Saraogi.