According to the latest data from the Ministry of Overseas Affairs, the number of emigrants from Bihar surged from 36,493 in 2006 to 71,438 in 2011. Siwan and Gopalganj are the new hotspots for remittances, dramatically transforming the lives of people in the region.

Ashraf Ali, an agent at Western Union's Bathua Bazar office, says the outlet handles transac tions worth `2 lakh a day. Money transfer agencies have sprouted in Gopalganj and Siwan.
Sarika Malhotra
Bhim Singh, 29, and his younger brother Ashu are building their dream home in their village, Indrawa Abeidullah, in Bihar's Gopalganj district. The four-storied house has a four-room set on each floor and will cost Rs 60 lakh. That is a far cry from just a few years ago when they lived in a kutcha mud house and their father ran a grocery shop which barely made Rs 4,000 a month to support his family of 10. 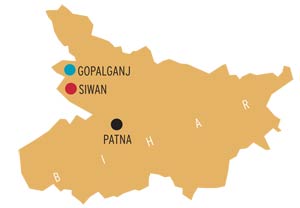 How did this transformation occur? It all began in 2006 when Bhim Singh, following in the footsteps of several village youth, decided to get a job overseas. "Yahaan pe kuch kamaai nahin ho rahee thee (I was hardly earning anything here)," says Singh, who has five sisters.

He found a job as a pipe fitter with Consolidated Contracting International Co in Doha, Qatar. He borrowed from friends and a local moneylender to meet expenses of about Rs 62,000 on travel agents, visa and other travel-related needs. "I returned it in just two months," he says. His initial salary was Rs 35,000. He also opened a snack counter and earned Rs 10,000 more. Since the company bore his food, clothing and lodging expenses, he saved almost his entire income and sent it home. Next, in 2009, Ashu went to Saudi Arabia to work for National Construction Co and started sending home another Rs 32,000 every month.

Today, all siblings are married. "Each sister's marriage costs us at least Rs 5 lakh. The money we earned overseas made it possible," says the elder sibling. 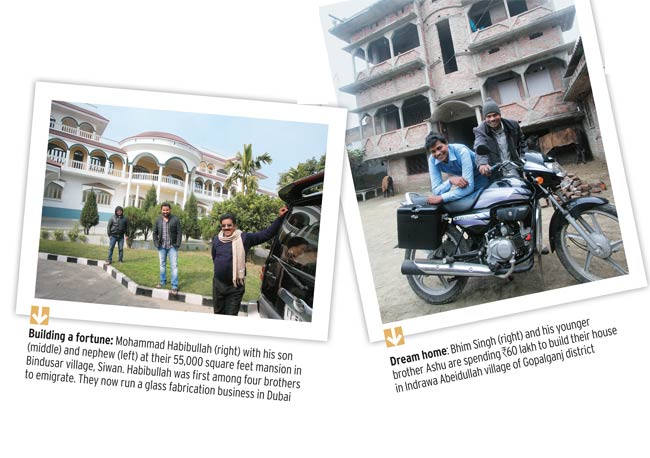 Click here to Enlarge
The Singhs are not the only ones building a new home in their village. Construction activity can be seen in every lane. An estimated 80 per cent of the local economy in Gopalganj and the neighbouring Siwan district depends on remittances from overseas workers. Bihar, in fact, has emerged as the new hotspot for emigrants, especially those bound for West Asia.

In all, about five million Indians are working overseas. In 2011, 626,565 workers emigrated from India, 90 per cent of them going to Saudi Arabia, the United Arab Emirates, Oman, Kuwait and Qatar. There has been a steady increase in remittances as well, from $25 billion in 2005/06 to $55.9 billion in 2010/11, according to Reserve Bank of India data (see Steady Growth). The World Bank estimates India likely received $70 billion from overseas in 2012, up from $63 billion the year before.

State-wise data is difficult to get. Kerala is the only state which periodically maps the trend. A survey by the Thiruvananthapuram-based Centre for Development Studies shows the state got Rs 49,965 crore ($9.11 billion) in remittances in 2011. Malappuram district topped the list, receiving Rs 9,040 crore, or more than a sixth of the total.

The Bihar government does not have district-wise data on emigrants, but travel agents estimate that Gopalganj and Siwan account for 70 per cent of the state's total. The rush to go overseas can be gauged from the fact that the Siwan police verified 198,000 passports from 2007 to 2012 and Gopalganj police verified 153,000.

Sushil Kumar Modi, Bihar's Deputy Chief Minister, acknowledges the phenomenon. "Every time I board a Delhi-to-Patna morning flight, I meet at least 10-12 people from Gopalganj and Siwan coming from overseas," he says. Funds from overseas are changing the sociocultural landscape. Until a few years ago Muslims accounted for nearly 80 per cent of the total emigrants and Hindus the rest. Today, Hindus account for 40 per cent.

Among Muslims, change is evident in the kind of education sought. Boys study in English-medium schools and go to cities for professional courses. Take, for instance, Mohammad Habibullah from Bindusar village in Siwan district. He never completed schooling but went to Qatar in 1979 as a driver. His son Shahid has a management degree from Amity University, Noida.

Indrawa Bairam village, part of the panchayat that covers Indrawa Abeidullah and four other villages, has 40 boys pursuing engineering courses in Karnataka, Maharashtra and Delhi. Sarpanch Sher Alam says this was unimaginable 10 years ago. He adds the panchayat has 6,400 voters including 3,300 men. Of these, at least 1,700 are working overseas.

Girls, however, still get an Islamic education. Village elders are hopeful things will improve for women, too. "We want them educated. With all-round development mindsets will change," says Mohammed Ali Imam Rayeen, a community leader and businessman in Mirganj. Aspiring migrants at a training centre run by Al Saifi Educational and Welfare Society. There are at least 50 training institutes in Gopalganj and Siwan districts.
Most emigrants have limited formal training and learn on the job. This has prompted some locals to set up training centres for teaching job skills such as masonry and carpentry to aspiring emigrants. There are at least 50 training institutes, such as Al Saifi and Arbab Institute, in Gopalganj and Siwan districts. They charge between Rs 2,000 and Rs 5,000 from the aspirants.

These centres also work as placement agencies where officials from various companies, who may be Indians or foreigners, interview locals seeking jobs. "This trend began about five years ago. Every month three to four interviews are held," says M. Haque, who runs Hamidia World Travels, a travel agency in Siwan.

These centres network with Gulf-based companies either directly or through agents based in Delhi and Mumbai. They announce the dates of interviews and tests in local markets using loudspeakers. They distribute leaflets that specify the names of companies coming for interviews, number of positions on offer under different categories, and the likely salaries. One such leaflet mentions the salary of masons and carpenters as 1,300 to 1,400 Saudi Arabian Riyals (Rs 19,000 to Rs 20,500). The craze for working overseas is such that even children in the two districts know the riyal-rupee exchange rate.

Deputy Chief Minister Modi admits there is need for training. He says the state will soon start a programme to provide 15 to 20 days training in various job skills. The increase in remittances has also led to a mushrooming of money transfer agencies. Western Union, the global money transfer company, has 200 outlets in Gopalganj. Kiran Shetty, Managing Director, Western Union Services India, says Bihar has emerged as a strong remittance market. "The number of our outlets in Bihar has jumped from 2,200 in 2010 to 5,500 in 2012," he says. Ashraf Ali, an agent at the company's Bathua Bazar outlet in Gopalganj, says his office handles transactions worth Rs 2 lakh daily. He estimates that the total money transfer business would be Rs 150 crore a month in Gopalganj and Rs 200 crore in Siwan.

UAE Exchange, the principal agent for Xpress Money and Western Union, increased the number of its outlets in Bihar from three in 2010 to nine in 2012. "For us the remittance flow to Kerala is growing at less than five per cent and Tamil Nadu by three per cent," says Promoth Manghat, Vice President, Global Operations, UAE Exchange. "Growth in Bihar was 19 per cent in 2012."

Thomas Cook opened its money transfer and foreign exchange branch in Siwan six months ago. "On average, Rs 2 crore worth of foreign currency is encashed per month at our branch," says the branch head Ashish Kumar. Banks are tapping into this opportunity, too. Raj Kishore Prasad, Senior Vice President, International Retail, Axis Bank, says his bank has tie-ups with Xpress Money, MoneyGram and EzRemit for money transfer.

But emigration has also had other side effects. Some elders worry that young people are neglecting education and instead opting for jobs overseas by paying placement agencies. Locals also complain about the shortage of agricultural labour. "We have about 90 acres of land but very few labourers to work on it," says Laxmi Narayan Singh of Line Bazar village in Gopalganj. Singh's brothers run a construction business in Dubai. "Buying more land is not a wise decision anymore. Who will till it?"

Still, the outflow of workers and the inflow of money are transforming the region. Shops of various brands have sprung up. Women are splurging on cosmetics. Farmers are buying tractors and other farm equipment. Sales of television sets and other consumer durables are rising as well. Just about every house in the two districts has a story to tell. Ali Imam remembers a poor woman whom he used to give one or two-rupee coins occasionally as charity.

"She came to my shop after having been absent for some six months and I took out a coin for her," he says. "She looked me in the eye for the first time and said, 'Babu ab ye nahin chahiye, mere do bete Arab ko gaye (I do not need this now, my two sons have gone to the Gulf)."