What is worrying is that this unexpected boost has not produced any buoyancy in the economy. Alongside declining exports, domestic demand also remains low, undermining corporate appetite for investment.

It has been a prolonged streak of good luck for the ruling National Democratic Alliance (NDA) government. Since it was sworn in 20 months ago, the global price of crude has dropped over 60 per cent, from $106.85 a barrel in May 2014 to below $35 a barrel - an 11-year low - in December 2015. As nearly 80 per cent of India's crude is imported - accounting for almost a quarter of the total import bill - the decline has not only saved precious foreign exchange but also transformed the oil sector from one riddled with under-recoveries and subsidies, a headache for successive previous governments, to a wellspring of savings and revenue generation.

Largely due to the fall in oil prices, India's import bill between April and November 2015 declined 17 per cent to $261 billion (Rs 17.35 lakh crore). Oil imports dropped 42 per cent to $61.41 billion (Rs 4.08 lakh crore) in the same period. According to the government's petroleum planning and analysis cell, the oil bill over the entire year 2015/16 is expected to be around $69 billion (Rs 4.58 lakh crore). Compare this with the same bill in 2014/15, which was a tidy $113 billion (Rs 6.87 lakh core), or better still, with that in 2013/14, the last year of the Manmohan Singh-led United Progressive Alliance (UPA) government, when it was $168 billion (Rs 8.65 lakh crore). With global demand sluggish, Indian exports have fallen 17.7 per cent in the past 11 months, but the reduction in oil prices has helped to considerably soften the blow.

Only part of this bonanza, however, has been passed on to consumers. The retail prices of petrol and diesel have dropped by only 17 and 21 per cent, respectively, since April 2014 (see Oilonomics). The rest of the windfall has been mopped up by the government by increasing excise duty more than half a dozen times in 20 months - four times between November 2014 and January 2015, and thrice again since November 2015 so far (See Hike After Hike). The overall excise duty increase is 108 per cent on petrol and over 200 per cent on diesel - the present government thus earns Rs 10.25 more on every litre of petrol bought and Rs 9.33 on every litre of diesel than the UPA government did. 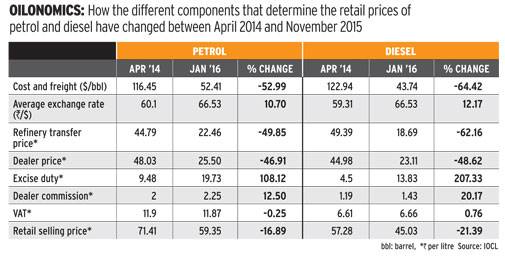 Thanks to the hikes, excise tax collection this fiscal till November 2015 was Rs 1,70,693 crore, or 67.1 per cent higher than in the corresponding period in 2014. By November, almost 75 per cent of the total budgetary excise tax estimate for 2015/16 had already been achieved, with the oil and gas sector contributing nearly 78 per cent. The rise in excise collection has in turn raised overall indirect tax collection growth to 34.3 per cent. As the finance ministry sets about preparing the coming Budget, meeting the estimate for indirect taxes is the least of its concerns. In addition, low crude prices have also enabled the government to take the risk of completely de-controlling diesel. Had crude costs been increasing, the step could have had serious political consequences.

"The government is treating the oil and gas sector like a cash cow," says Ajay Bansal, President, All India Petroleum Dealers Association. "Why should consumers pay for its poor planning? The real benefit should have gone to consumers, but it hasn't." Adds Ajay Arora, Partner and Leader, Oil and Gas practice at consultancy firm EY: "Given that other macroeconomic indicators are not that favourable, benign oil prices have been an absolute boon for the government. It has helped contain the fiscal deficit and the outflow of dollars."

Higher tax generation due to falling crude prices has helped the government offset revenue shortfall in other areas, notably disinvestment. The budgetary target from disinvestment in 2015/16 was set at Rs 67,500 crore, of which (up to December 2015) only Rs 12,700 crore - or 18 per cent - had been achieved, through stake sales in Rural Electrification Corporation (REC), Power Finance Corporation (PFC), Dredging Corporation of India (DCI) and Indian Oil Corporation (IOC). Unfortunately, August 24, the day chosen for the IOC disinvestment - the last so far - proved singularly unpropitious, as it saw the BSE Sensex crashing 1,624 points - or six per cent. Less than a fifth of the quota reserved for retail investors found takers, and finally Life Insurance Corporation - as it has in numerous past occasions for other PSUs - stepped in to bail out the effort. Since then, another round of disinvestment in Coal India has been cleared by the Cabinet, which, if successful, will add Rs 20,000 crore to government coffers. But collections will still be way short of the target.

Lower crude prices have in turn reduced the cost of LPG and kerosene, thereby bringing down - since their regulated selling price has remained the same - the government's under-recoveries on both items. Between April 2014 and December 2015, the under-recovery on every cylinder of (subsidised) LPG has come down from Rs 506.06 to Rs 140.48 - a reduction of over 70 per cent - while that on kerosene has dropped from Rs 34.43 to Rs 13.31 per litre - over 60 per cent. This has brightened the chances of the government restricting its subsidy payout to below the Rs 30,000-crore target set for 2015/16, a drop of more than 50 per cent over 2014/15. Taken together, the slashed import bill, the higher excise earnings and reduced under-recoveries have brought the present government a benefit of around Rs 5 lakh crore.

The burden of under-recovery is shared by the government and the three state-owned oil marketing companies - IOC, Hindustan Petroleum Corporation Ltd (HPCL) and Bharat Petroleum Corp Ltd (BPCL). The reduction, along with the deregulation of diesel prices, has thus benefitted the oil companies, too. In the past 18 months, the three companies have cumulatively registered a profit of Rs 23,859.07 crore, indirectly further swelling government's finances with their higher dividend payouts. Part of this gain, no doubt, has been offset by the inventory losses the oil companies have faced due to the fall in oil prices. IOC, for example, lost over Rs 5,000 crore due to higher inventory cost, which wiped out its entire profit in the second quarter of 2015/16. Even so, its profit in the first quarter was higher than its profit across the entire fiscal year 2014/15.

"We have not gained from falling crude prices," says A.K. Sharma, Director, Finance, IOC. "We have benefitted to the same extent every bulk consumer of oil has. Lower oil prices have helped all end-users, be it the aviation, fertiliser, power or transport sectors. We buy oil for our refineries so it has benefitted us as well. But it is the government which is the main gainer."

There is general consensus that the price of crude is unlikely to fall any lower, and that further benefit from the slide should not be expected. What is worrying is that this unexpected boost has not produced any buoyancy in the economy. Alongside declining exports, domestic demand also remains low, undermining corporate appetite for investment. Private sector investments announced in the first eight months of 2015/16 were 30 per cent lower than in the same period of the previous fiscal. The Index of Industrial Production (IIP) is under four per cent, while that for manufacturing alone is below three per cent. The 2015/16 second quarter results of listed companies show that overall net sales have declined by 5.3 per cent compared with the same period in 2014/15, while that of manufacturing companies has fallen 12 per cent.

Neither are companies borrowing much, nor are banks, worried about non-performing assets, inclined to disburse loans. Non-food credit growth in eight months of 2015/16 has been only 8.6 per cent; in many sectors it has fallen. "On the growth front, the central concern is with investments," said Reserve Bank of India Governor Raghuram Rajan at a business event in Hong Kong on November 20. "Private investment has fallen back quite a bit and so has public investment."

Meanwhile, massive additional public expenditure is in the offing. Implementing the Seventh Pay Commission's recommendations, announced in late November, will mean a payout of around Rs 1.02 lakh crore in 2015/16. Bringing in the One Rank, One Pension (OROP) scheme for defence personnel, which the government has agreed to in principle, will cost Rs 2,500-3,000 crore. "I call it a trilemma," says Jayant Sinha, Minister of State for Finance. "We have the Pay Commission, OROP, and the need to keep pushing public investment. It will require very careful fiscal management if we are to manage this and yet keep the fiscal deficit at 3.5 per cent."

The hope is that more money in the hands of government servants will stimulate demand. "Managing the economy in the next fiscal will be very challenging," says D.K. Joshi, Chief Economist at ratings agency CRISIL. "The pay hike for government employees will help. The government must be praying for a good monsoon next year to take care of the rural economy. The accelerator has also to be pressed on reforms, especially on implementing the goods and services tax (GST)."

But there are also a few signs of hope. While domestic investment may be stagnating, foreign direct investment (FDI) continues to pour in - in the first nine months of 2015, FDI inflow surged 18 per cent over the corresponding period in the previous year, to $26.51 billion. "India still offers the best opportunity among developing nations," says Arora of EY. "Our domestic demand is substantial and insulates us to some extent from what is happening to the global economy."

Another good omen is the rise in the sales of heavy trucks and buses, which have grown 31.4 per cent in the first eight months of this fiscal, since they are a sign of increased freight movement. "We see demand for light commercial vehicles coming back and expect commercial vehicle sales to scale peak levels in the first half of next year," says Vishnu Mathur, Director General, Society of Indian Automobile Manufacturers. Passenger car sales have also risen 11.4 per cent in the same period, indicating that the middle class is slowly stepping out to shop.