The future of luxury in India depends on how fast it can penetrate the hinterland. The good news is that small-town consumers are no longer afraid to flaunt their dough

SANJAY GHODAWAT with his Eurocopter chopper and three of the 100-plus luxury cars that he owns (Photo: Outlook Business)
Sumant Banerji

Fifty-two-year-old Sanjay Ghodawat is a household name in Kolhapur. Starting out as a humble gutkha (chewing tobacco) seller in 1988, traversing the dusty villages and small towns of Karnataka, Maharashtra and Goa on a burly Tempo Traveller, Ghodawats business empire today is worth over Rs 1,000 crore, and spans sectors like wind power, agriculture, chemicals, packaging, edible oils, real estate, heavy engineering, textile and FMCG and, of course, the tobacco business. That transformation has also brought about a change in his transport - he now owns more than 100 luxury cars including his favourite Rolls-Royce, Ferrari, vintage Plymouth and Bentley. His fetish for cars is such that he has a 3,000-sq. ft service workshop at home that can cater to 15-20 cars at a time. And when the road ends, he also has a Eurocopter chopper at his disposal. "I have been hugely fond of bikes and cars," says Ghodawat. "My childhood collection of all sorts of high-end bikes and cars has now turned into one of real ones."

Ghodawat is a perfect brand ambassador of how luxury has seeped into even the smallest of cities in India. And of course, he, and Kolhapur, aren't the only ones. Right in the middle of the festive season in 2010, Aurangabad emerged as the luxury destination of the country. The small industrial town in Maharashtra, known for its acute water shortage, and the Ajanta and Ellora caves, witnessed a bulk deal of 150 high-end imported cars worth Rs 65 crore, with the who's who of the luxury industry seeking directions to the city. The event, in fact, heralded the trend of bulk luxury deals in India. 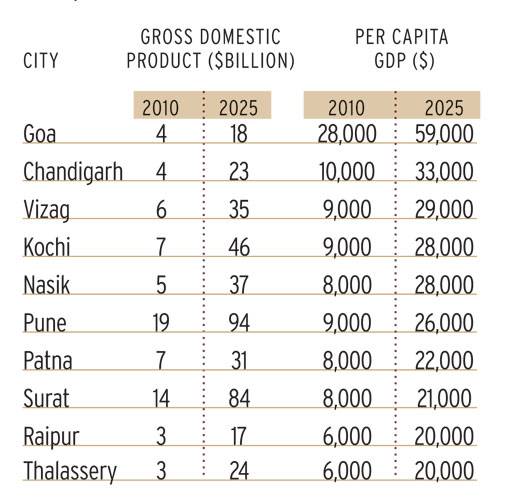 The Aurangabad Group, as they came to be known, comprising doctors, builders, industrialists and professionals from other fields, bought 13 top-of-the-line Mercedes-Benz S Class saloons, 74 E Class sedans, 39 C Class, and 6 GL and 18 ML Class SUVs. The one-day blitzkrieg was not a coincidence. The buyers, in fact, wanted to draw investors' attention to the city and the bulk deal was one of the ways to do it. "The idea behind placing this large order was to bring Aurangabad on the global investment map," said industrialist Atul Save, one of the participants. 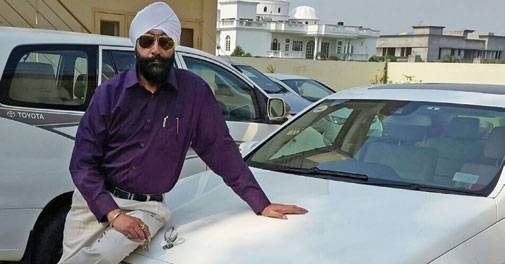 AVTAR BHOGAL The Ludhiana industralist is the owner of two Mercs

It is close to six years since the Aurangabad deal, and the appetite for luxury consumption in small towns has grown manifold since then. Despite limited presence of luxury brands at the retail level, a significant 45 per cent of all spending on luxury items comes from those residing outside the four metropolitan cities. From Surat or Vadodara in the West, and Jamshedpur and Ranchi in the East, to Ludhiana and Chandigarh in the North, and Coimbatore and Kochi in the South, there are many takers for the uber luxury spread in India.

Out of the Closet

With an acquired taste for exotic whisky and a curious fetish for high-end cuff links, 31-year-old Gurjeet Singh is one of this emerging breed of luxury consumers. He is a regular at New Delhi's posh Imperial Hotel. His immaculate dressing and polished demeanour help him blend with the surroundings. However, his relative discomfort with the Queen's language betrays his rural background. Singh hails from Jagraon, a small city close to Ludhiana in Punjab. The next-generation scion of one of the many industrial families of the state, his trips to Delhi are always punctuated by his shopping sprees - mostly linen shirts, silk ties (he never wears one, but purchases them for gifting) and of course, cuff links. "Punjab is known for its loud fashion sense, I like it more subtle. Delhi gives me that," he says, adding: "Sometimes I visit the city with no work... just to splurge. I don't shop with a set notion but brand is important and, if I like something, the price tag does not hold me back. We have our businesses and then we have land. We keep our business expenses in check, but do not believe in cutting corners when we shop."

It is obvious that beyond the glitz and glamour of the metropolis, small towns and cities are not bereft of wealth. In fact, everyone agrees that within large swathes of poverty, hidden pockets of wealth dot the length and breadth of the country - whether the land holders and large farmers of Punjab, West Uttar Pradesh and Bihar, or the diamond merchants of Surat, and the royals of Rajasthan and Madhya Pradesh, or even the mining barons of Bellary and Goa, have deep pockets and a taste for the extraordinary. Yet, they have traditionally kept away from ostentatious show of wealth in small-town India.

"The rich in Kanpur, Lucknow, Indore or Ludhiana are the real affluent class that always had the money and evolved tastes. In metros you have the nouveau riche who have very recently become affluent, and the tendency with them is to splurge and show the world that they have arrived. Those who are traditionally rich do not need to show their wealth," says Abhay Gupta, Founder and CEO, Luxury Connect, adding: "They know about luxury and are aware of all the brands. They are also conservative and do not want to show off unnecessarily."

A part of the growth can, however, be attributed to better access to luxury brands. The high cost of opening and maintaining a luxury showroom in a prime location in Delhi and Mumbai does not translate into good business, if the luxury brand owners rely only on the just-arrived affluent class of the big cities. The concept of home shopping - where retailers organise trips for small-town clients to the metros - has, therefore, become a norm. The advent of e-commerce that virtually brings luxury shopping to your doorstep, has only whetted their appetites.

"The next level of luxury consumption will come from the interiors of India - from newer geographies in tier II and tier III cities," says Nikhil Mehra, CEO, Genesis Group. "We are waiting for the right infrastructure that can house international luxury brands in the environment that these brands require. Some new stores should open early next year, such as the Palladium in Chennai. We will be opening several of our stores there. At the moment, we also conduct a fair amount of home shopping for key clients outside the main metros. The teams fly in to service important clients, if they are unable to travel to our existing boutiques. Apart from that, the new wave will be the availability of luxury via e-commerce platforms," he adds.

According to a 2015 CII-IMRB report on the luxury buying pattern in India, 35 per cent of sales come from Aurangabad, Ludhiana, Kochi and Bellary. It also says that the growth rate of luxury consumption and conversion ratio of walk-ins at most luxury or hybrid malls are higher in tier II and III cities. "It is a reality. We sold luxury bags in Hyderabad online. We have sales in Pune, Surat and Jharkhand," says Priya Sachdev, Founder and CEO, RockNShop. "They buy everything - from accessories and ready-to-wears, to shoes and jewellery. Around 40 per cent of our sales are from tier II and III towns." A separate survey conducted by industry body Assocham last year said the Indian luxury market is growing at a compounded annual growth rate of 25 per cent and is poised to cross $18.3 billion in value terms by 2016-end. The survey revealed that growth is being fuelled by the rise in disposable income, brand awareness among the youth and purchasing power of the upper class. RULING THE ROOST The four metro cities still account for more than half of luxury sales in India (Source: McKinsey)

"Luxury jewellery, electronics, SUVs and fine dining have grown beyond expectations, while apparel, accessories, wines and spirits have continued their strong growth in 2016," says D.S. Rawat, Secretary General, Assocham. "High Internet penetration across tier II and III cities, along with high disposable incomes shall lead to approximately 100 million transactions on the Internet by 2020. As a result, luxury consumption is going to increase manifold in the country."

The biggest challenges in any luxury business in India are high rentals and low conversion rates. The most appropriate place to set up a luxury store is always the most expensive plot of real estate. And, in an emerging economy like India, it puts businesses on shaky ground. Delhi's Khan Market, Connaught Place, Select City Walk or Mumbai's Peddar Road, Fort Fountain and Lower Parel that host most of the luxury stores, figure in the list of most expensive retail spaces across the world. The demand in just one city, howsoever big, rarely justifies that.

"Most people started getting aware of luxury around 2008 and, even then, the retailers had realised that a large part of the population interested in such items was from small towns and cities. In North, you had people from Ludhiana, Lucknow and Patiala, and later from Gwalior, Kanpur and Indore, frequenting luxury stores in metros. There were a handful of people who had the money but were in the closet," says Gupta of Luxury Connect, adding: "When the emporios started opening up, it became a shopping destination for them and slowly became a pattern. Retailers started organising shopping trips, bringing bus loads of customers from Ludhiana for shopping because, right from the start, it was a challenge to bring relevant people to the showrooms as the rentals were really high."

A 2012 McKinsey Global Institute study on cities around the world had estimated that 36 cities from India would find a place in the top 600 cities that will contribute 60 per cent to global gross domestic product (GDP) by 2025. The report also said that 20 Indian cities, including Ludhiana, Surat, Vijaywada, Vizag, Kochi, Coimbatore, Indore and Raipur, among others, would register GDP growth higher than New Delhi, Mumbai, Chennai or Kolkata by 2025.

Yet, not everything is hunky-dory with luxury consumption in tier II cities. While a metropolis displays appetite for all kinds of luxury - from watches and apparels to cars, bikes and hotels - small towns often have a particular preference while remaining dispassionate about other forms of luxury. In the case of Aurangabad, the automobile extravaganza led to a rush of other luxury brands in the city. But, not all of them created a flutter.

"We have done some dumb things along with our smart moves. One of our bad decisions was to get into cities like Aurangabad, where 150 Mercedes were bought at one go. We went in without verifying (conducting a market survey of the luxury watches on offer) and had to shut the store within 18 months," says Yash Saboo, Founder, Ethos Watch Boutiques.

One size, truly, does not fit all.