As capital becomes scarce in the global markets, foreign portfolio investors—the lifeblood running through domestic equities—turn their backs on India. This has got more to do with the stress in the financial system in their own backyard than any fundamental issues with the domestic market. Will they return, or should we be waiting for them at all? Rachna Monga goes into the details. Try this for size: if the inflows of foreign institutional investors (FIIs) into Indian equities over the past five years were up for grabs on Wall Street, Lehman Brothers Holdings might not have gone under. Or Merrill Lynch wouldn’t have been compelled to rush into the arms of Bank of America. Since 2003, FIIs have pumped all of $51 billion (Rs 2,49,900 crore) into Indian stocks. That’s a lot of money—just $7 billion (Rs 34,300 crore) short of the $58 billion (Rs 2,84,200 crore) worth of toxic mortgage-backed securities that dragged Lehman down; or perhaps Merrill could have used up the $51 billion to offset the $40 billion (Rs 1,96,000 crore) of sub-prime related writedowns Wall Street’s #3 investment bank was forced to make.

Arun Mehra
That, of course, was till 2007. It’s a slightly different story now, what with the FIIs pulling some $12 billion (Rs 58,800 crore) out of Indian equities till October 23, 2008. Perhaps, if the Indian stock markets were an investment bank on Wall Street, a bailout would be in order. The correlation between FII inflows and the movement of the Sensex, is clear as crystal. The $51 billion that flowed in propelled the 30-share index from sub-4,000 level in 2003 to 20,000 by early-2008. The outflows of 2008 have resulted in the Sensex sinking to 8,700-level at the time of writing. Reports at the time of going to the press suggested that Securities and Exchange Board of India (SEBI) may consider a ban on overseas stock lending and borrowing done by foreign investors. This further added to the negative sentiment.

If the foreign investor is bidding adieu to India, it’s got more to do with the stress in the financial system in his own backyard than any fundamental issues with the domestic market. What’s more, they’re fleeing from other hitherto-attractive havens, too. According to EPFR Global, a firm that collates asset allocation data, foreign investors have withdrawn $29.5 billion (Rs 1,44,550 crore) from emerging stocks and bonds over the past three months.

Sridhar Sivaram
Government bailouts in the US and Europe may provide some relief in terms of liquidity, but for markets there may be more pain in store. While the chances of more banks going bust can’t be ruled out, the adventurous hedge fund universe— known for its high-risk, high return maneouvres—hasn’t yet got caught in the tornado. Analysts expect that to happen in the days ahead.

So, have the FIIs gone for good, or will they be back in better times? Or perhaps the question to ask is: will the times get better, at all? That it could be 3-4 quarters before they’re back is just one estimate. Arun Mehra, Fund Manager at Fidelity India Focus Fund, a dollardenominated and India-dedicated offshore fund, is surprised by the ferocity of the FII exodus. “Since India is not an export-oriented economy, we should have held up better. The way stock prices had moved towards end-2007, the correction was waiting to happen; but we didn’t anticipate the turmoil will make foreign investors flee markets like India,” says Mehra, whose fund has assets worth $2.89 billion (Rs 14,161 crore) invested in Indian companies.

Adrian Lim
A slowdown in industrial growth and corporate earnings may have taken some steam out of the rally in domestic markets. But the panic in global markets in September and October—which account for roughly 50 per cent of FII sales in 2008— clearly took its toll of investor sentiment. Nick Beecroft, Portfolio Specialist at T. Rowe Price International, Inc., which is registered as an FII with SEBI, says there is a complete aversion towards risk among retail and institutional investors in the US and the UK. “When they find uncertainty in their home markets, the tendency is to sell assets in emerging markets to cover risks,” he adds. T. Rowe Price’s global emerging markets fund has an overweight position in Indian stocks and the Asia ex-Japan Fund has invested onethird of its assets in India.

Nick Beecroft
If you thought the over 50 per cent erosion in value makes Indian stocks cheap, that may not quite be the case. India has in the recent bull phase always traded at a higher priceearnings multiple (P-E) to other emerging markets. Despite the recent fall, it still trades at a P-E of around 11 times earnings for 2009—that’s still at a premium to the emerging markets multiple of 7.2 times. “Investors still see India as an expensive market,” says Beecroft, which could indicate that India will witness more outflows. There are a lot of companies and markets across the world that are trading cheaper than India, avers Mehra.

So if money is flowing back home, it is also because quite simply stocks are cheaper there. For instance, on September 30, the Dow Jones Industrial Average, the US benchmark index, had a P-E of 11.35, as good as a multiple of 11 times offered by Sensex. Moreover, the currency gains no longer hold out as the Indian rupee has depreciated from Rs 39.398 in January to Rs 50 to a dollar; this means the FIIs take lesser dollars home. That’s why, as Sridhar Sivaram, Executive Director, Morgan Stanley Investment Management, points out, it’s the investors and funds from non-emerging market dedicated funds, that are leaving in a hurry. Along with this, hedge fund redemptions are also resulting in FII outflows. 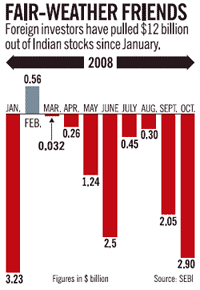 Perhaps, the only salvation for emerging markets is if the decoupling theory plays out. Capital flows will reverse if India is able to break free from the troubled global economy. Last fortnight, a global report by Morgan Stanley predicted that 100 per cent growth in worldwide GDP will come from emerging markets in 2009. Sukumar Rajah, CIO (Equity), Franklin Templeton Investments, feels that despite a slowdown in Asian region, growth will be several notches ahead of the developed economies. Will that translate in to higher capital flows in emerging markets is anybody’s guess. Adding to the uncertainty are the forthcoming general elections. “Indian stock markets are likely to stay volatile in the run-up to the elections...it is still too early to call a bottom to the sell-off,” says Adrian Lim, Fund Manager, Aberdeen Asia Asset Management, which manages a $2-billion (Rs 9,800 crore) India Global Opportunities Fund. Lim maintains a conservative India strategy of focussing on cash-rich companies that have an opportunity to strengthen their competitive position.

Sukumar Rajah
Sivaram feels that almost half of the capital expenditure announced last year may not come through, and that companies could scale down projects. At the same time, he points out, foreign investors do understand that India will stand to gain because of the global fall in commodity prices, as India is a large importer of commodities, like oil and fertiliser. “The overall financial crisis is so huge that the impact of falling commodity prices will not be felt in the stock market immediately. However, the Indian economy will stand to benefit with lower fiscal deficit due to fall in oil and fertiliser prices,” he adds. The offshore funds of Morgan Stanley have a defensive strategy of staying away from companies with high capex plans and focus on consumer discretionary and staples, and cashrich companies.

Click here to Enlarge
Amidst the dark clouds, there are more than a few silver linings. A vote of support for emerging markets should come from the large institutional investors such as pension funds and sovereign wealth funds. Recently, Norway’s $350-billion (Rs 17,15,000 crore) sovereign wealth fund announced plans to invest $2 billion in India by the end of this year. The fund has increased the weightage of India in its investment portfolio. A US-based pension fund, California State Teachers’ Retirement System, which has been investing in non-US markets through the private equity route, may consider a global equity asset allocation strategy. This interest is based on an external study commissioned by the fund that points to the increasing contribution of emerging markets to world GDP. India needs more of those—studies and allocations.