Can digital media make a difference in general elections 2014?

Digital media is changing the way political parties interact with voters. Digital media strategies are now part of the overall campaign briefs, and parties are spending an increasing amount of time and resources to mobilise netizens.

Shweta Punj
On a pleasant August morning in New Delhi, over 250 state and national leaders of the Congress party gathered for a crash course on social media. Among those who attended the one-day workshop were lawmakers Ajay Maken, Shashi Tharoor, Manish Tewari and Deepender Hooda. Congress Vice President Rahul Gandhi, who has stayed away from social media, also stopped by for some time. The participants listened to executives from social networking giant Facebook, micro-blogging site Twitter, and mobile messaging service WhatsApp on how social media can be used to interact with voters. Why was the workshop important? "Social media is indispensable," says Tharoor. "If you are thinking about a long-term future, which we are, you have to build a platform today."

The Congress isn't the only party trying to ride the digital wave ahead of general elections to be held by May 2014 . At the New Delhi head office of the main opposition Bharatiya Janata Party (BJP), about a dozen tech professionals are crunching data on social media users. The data is broken down on the basis of gender, Facebook and Twitter users, and the mode of Internet access - mobile, computer, tablet, etc. Leading the IT team is Arvind Gupta, an IIT graduate who ran his own business in Silicon Valley before he began working for the BJP about six years ago. Gupta says social media could impact polls in 160 Lok Sabha seats where about 20 per cent voters have Internet access. What explains the fascination of India's two biggest political parties with social media? All regular BJP karyakartas (party workers) as well as volunteers are training to become e-karyakartas: Arvind Gupta, Head of BJP's IT cell Photo: Aditya Kapoor
Until recently, the campaign strategies of political parties centred on public rallies, and print, television and radio advertising. But the proliferation of Internet, computers and smartphones in the past few years has prompted politicians to look at the potential of the online medium. The country has almost 165 million Internet users as of March, according to the Telecom Regulatory Authority of India. A recent study by the Internet and Mobile Association of India, a trade group, and market research firm IMRB estimates the number of social media users to rise to 91 million by December from 86 million in October. To be sure, this is a fraction of India's total voting population of more than 700 million. And, not all social media users vote. But these people are actively engaging in political debates and influencing opinion. Besides, there will be about 149 million first-time voters in 2014. Also, in the 2009 elections the difference in votes between the Congress and BJP was just 40 million, according to the Election Commission. It's here netizens can make a difference. I get terribly abused and trolled all the time. I was very disappointed initially, but then I realised that I have to learn to overcome that: Sanjay Jha, spokesperson, Congress party
Several studies have highlighted the importance of this group of voters.

In a Business Today survey, conducted in 12 cities by market research firm MDRA in October, nearly 95 per cent respondents said they were following the digital campaigns of political parties. The survey also showed that over 46 per cent of the 1,010 respondents, who will be eligible to vote for the first time in 2014, take opinions expressed online seriously. In April, research firm IRIS Knowledge Foundation said in a study social media could have a "high impact" on 160 of 543 Lok Sabha seats in the 2014 polls. In these constituencies the number of Facebook users is more than the margin of victory of the winner in the 2009 polls or where Facebook users account for over 10 per cent of the voting population, it said.

Digital media strategies are now part of the overall campaign briefs, and parties are spending an increasing amount of time and resources to mobilise netizens. There is no estimate of the amount political parties are spending on social media campaigns. But its growing use has caught the attention of the Election Commission. On October 25, the commission said political parties and candidates will have to keep account of their expenses on social media websites, just as they do with traditional campaigning. Candidates must also declare their social media accounts and political parties will have to certify advertisements before posting on these websites, the commission said.

India is not the only country where political parties are using social media for campaigning. US President Barack Obama's campaign team effectively used social media during the presidential elections in 2008 and again in 2012. Indian politicians are now catching up. While top Congress leaders such as Sonia Gandhi and her son Rahul Gandhi, seen as a prime ministerial candidate, have been reluctant to adopt social media, some other party members are actively into Facebook and Twitter.

Tharoor, Minister of State for Human Resource Development, is one of the earliest adopters of Twitter among politicians and has over 1.9 million followers. Milind Deora, Minister of State for Communications, Information Technology and Shipping, is another prolific tweeter. The two-time parliamentarian from South Mumbai, a highimpact constituency according to IRIS, was the first Congress leader to tweet against the infamous ordinance that would have allowed convicted lawmakers to contest elections, just a day before Rahul Gandhi called the ordinance "complete nonsense". It (social media) allows for direct communication with the constituents: Milind Deora, Minister of State for Communications, IT and Shipping
Arguably the savviest politician when it comes to social media is the BJP's prime ministerial candidate, Narendra Modi. He has 2.6 million Twitter followers, 5.5 million Facebook 'likes', his own website and even a team of professionals managing his social media strategy. Modi isn't an exception in the BJP. Overall, the BJP is ahead of the Congress in the social media race. Many BJP leaders communicate with party workers through BlackBerry messenger groups and WhatsApp. The party has a database management department that has data of its worker network. It also has an online payment gateway through which about 5,000 people donate money every month. "We have well-established systems and cadres, and a balanced understanding of the utility of the [digital] medium," says BJP General Secretary Muralidhar Rao. "We are now thinking how Modi can address different segments - professionals, housewives, etc - at the same time."

The party will unleash targeted text and video messages and mobile applications closer to the elections, he adds. The Congress has been relatively slower in adopting social media, but it is working to close the gap. Congress supporters have launched fekuexpress.com, a portal designed to speak against Narendra Modi. The party is conducting social media workshops in all state capitals and in cities with a population of over one million. At a recent workshop in Patna nearly 500 volunteers showed up, while over 3,000 took part in a similar event in Kolkata.

Most of these volunteers are people with full-time jobs or businesses or are students. While some of these professionals are paid, most work pro-bono for the parties. Both the BJP and Congress are engaging a number of professionals - graphic designers, IT professionals, and communication experts - to execute their digital media strategies. One such Congress volunteer is architect Rachit Seth.

The 27-year-old was contacted by the party's communications team, led by Ajay Maken, a few months ago. Seth got noticed for his fan pages of Congress leaders and his blog, which highlights the party's achievements. "We are training state units and telling them how to respond to the opposition," he says. "The BJP is quite aggressive [on social media] but I think we are also being noticed now."

Suryanarayan Ganesh is another tech professional who conducts social media workshops for the Congress. Until about four years ago Ganesh, who lived in Sweden at the time, was one of the few people defending the Congress on social media. "BJP trolls have a huge manpower to trend something," he says. Trolls, in Internet parlance, are those who post inflammatory messages, start arguments or otherwise upset people.

Besides the BJP and the Congress, another party that is effectively using social media is the Aam Aadmi Party. The party owes its genesis to the India Against Corruption campaign of 2011. The movement galvanised middle-class people by asking them to give a missed call to register their support. This helped prepare a database of phone numbers that can be used to spread its messages. The party recently raised more than Rs 20 lakh after its convener Arvind Kejriwal took part in a Google Hangout chat with non-resident Indians. "The party owes its survival to digital media," says Dilip Cherian, founding partner of Perfect Relations, who advised Kejriwal on managing public perception in the past. Cherian feels parties will set aside at least 20 per cent of their campaign budgets for digital media in 2014. "My advice is parties should target anyone above 15 years of age, because while they cannot vote yet, they are active on social media and are definitely influencers," he adds.

What makes social media different from traditional forms of campaigning is that it is two-way communication. Unlike a print advertisement, for instance, social media allows the audience to talk back. It is cheaper, too. Deora feels social media is the closest to a public rally. "I love the medium for its interactivity," says Deora. "There is no intermediary. It allows direct communication with the constituents."

But, it cuts both ways. Social media, says a Congress leader, is like a "double-edged sword". Some politicians do not use digital media fearing their constituents can give them harsh feedbacks on a public platform. "I get terribly abused and trolled all the time," says Congress spokesperson Sanjay Jha. "I was very disappointed initially, but then I realised I have to learn to overcome that." 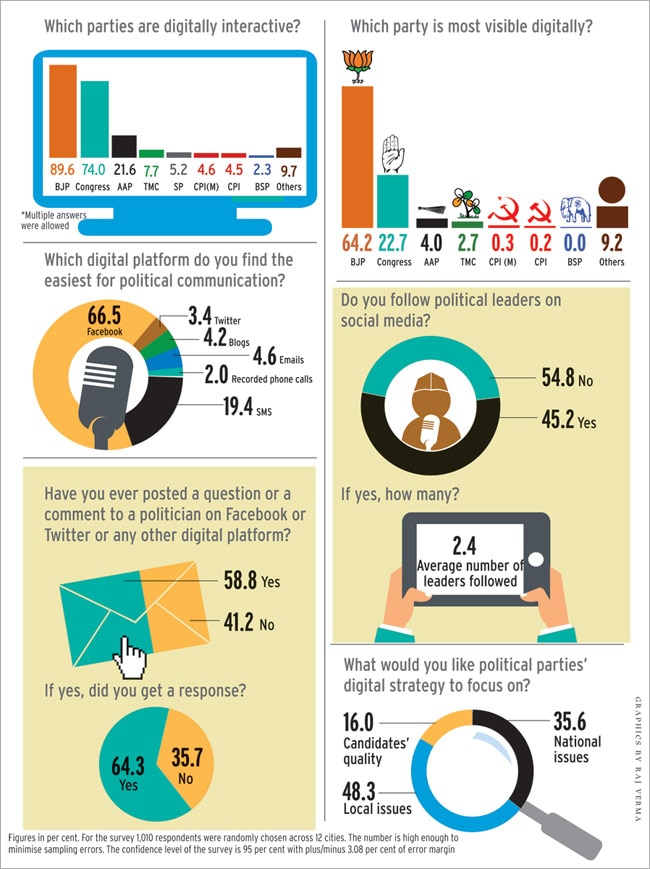 Digital media is empowering citizens to ask questions and demand answers. It is influencing opinions and pushing leaders to be transparent. Social media companies are also doing their bit to raise political awareness among people. Facebook has launched a "Register to Vote" initiative, while Twitter is offering a service where users can follow someone through a missed call or text message. So, will digital media be a game-changer in next year's elections? It could very well be. Just wait and watch.