Solar energy business looks up in India as tariffs fall

India is sundrenched for more than 300 days a year and is ideally suited to use it. But the country has remained far behind Europe and the US, both in manufacturing and project capacities.

In October last year, Moser Baer Clean Energy commissioned a 30 megawatt (MW) photovoltaic (PV) farm at Banaskantha district in north Gujarat. The plant will supply an estimated 52 million units of energy in a year - roughly the amount that Kerala consumes in a day.

Earlier this month, the Adani Group announced that it had commissioned a 40-MW solar power project , touted as the country's largest, in Gujarat's Kutch district. For Adani, India's largest private thermal power producer, it is the first major project in the renewable energy space.

But it is Solairedirect that has really set the new benchmark. The French company's bid of Rs 7.49 per kilowatt-hour (kWh), equivalent to 15 US cents, for its proposed 5 MW plant in Pokhran, Rajasthan, is by far the lowest tariff quoted under India's ambitious Solar Mission. In comparison, the price per kWh is about 23 US cents in Germany, the world's biggest solar power user.

Each project underlines the importance that is now being given to solar energy in India. The country, sundrenched for more than 300 days a year, is ideally suited to use it. But while the potential is well known, India has remained far behind Europe and the US, both in manufacturing and project capacities.

Now, the central and state governments are slowly working to harness the power of the sun. In January 2010, the Centre launched the Jawaharlal Nehru National Solar Mission, which targets setting up a generation capacity of 20,000 MW by 2022. In addition, 21 states are pursuing their own programmes, which optimists reckon will add another 10,000 MW over the next 10 years. Thus far, Gujarat and Rajasthan, blessed with the largest incidence of solar radiation, have attracted the largest inflows of investment.

MUST READ: US lobbies hard for access to India's solar component market
Just three years ago, grid-connected solar power in the country was less than 12 MW. By the end of 2011, India had acquired 190 MW in solar power generation capacity. By March 2013, that figure will grow five-fold to 1,000 MW under the Solar Mission targets alone.

Investor interest is rapidly growing. "There is an increased awareness about the opportunities in India among investors globally because of the decline in Europe, and China being a closed market," says Thomas Maslin, a Washington DC-based analyst with global consulting firm IHS Emerging Energy Research. Click here to Enlarge
According to a report by Mercom Capital, a clean energy consulting firm, India received $95 million (Rs 500 crore) in venture capital funding and over $1.1 billion in large-scale funding for solar projects in 2011. The biggest funding deal was the $694 million loan raised by Maharashtra State Power Generation Co. for its 150 MW Dhule and 125 MW Sakri projects. Export-Import Bank of the United States was the biggest investor, funding seven different large-scale projects.

Sunrise Industry
The reach for the sun is being driven by a host of private sector players. Green Infra, founded by Raja Parthasarathy, Managing Director of IDFC Private Equity, entered the solar space about 13 months ago. In November, its 10 MW solar farm in Gujarat's Rajkot district began pumping electricity into the state's grid. By the year-end, Green Infra had also bagged orders to set up two plants in Rajasthan's Jodhpur district. "In 2013, we will be looking at concentrated solar power projects with capacities in excess of 50 MW," says Shivanand Nimbargi, Managing Director and CEO of Green Infra.

Azure Power, started by first-generation entrepreneur Inderpreet Wadhwa, currently owns solar parks with 17 MW capacity. Wadhwa says the company has already invested $100 million and will invest more as projects arise. The big guns have also begun to jump onboard the solar bandwagon. Mukesh Ambani-owned Reliance Industries and Madhusudhan Rao-led Lanco are running capacities of 6 MW each; Lanco is working on projects that will raise its capacity to 100 MW. Last October, Venugopal Dhoot's Videocon commissioned a 5 MW farm in Maharashtra.

The growing confidence of the developer community is also helping. Two years ago, the government was ready to buy solar power at Rs 18 a kWh or unit of power. Scenting investor interest, NTPC Vidyut Vyapar Nigam, which oversees the solar mission, has since adopted the 'reverse auction method' to award projects, signing on developers quoting the lowest tariffs. This has led to huge savings - one analyst estimates it at Rs 1 crore per hour over last year's tariffs.

In 2010, the average tariff reached during Round One of the PV bids was Rs 12.25; in Round Two, it dropped to Rs 8.77 a unit. "The tariffs quoted are among the lowest in the world,'' says Tarun Kapoor, Joint Secretary (Solar), Ministry of New and Renewable Energy. 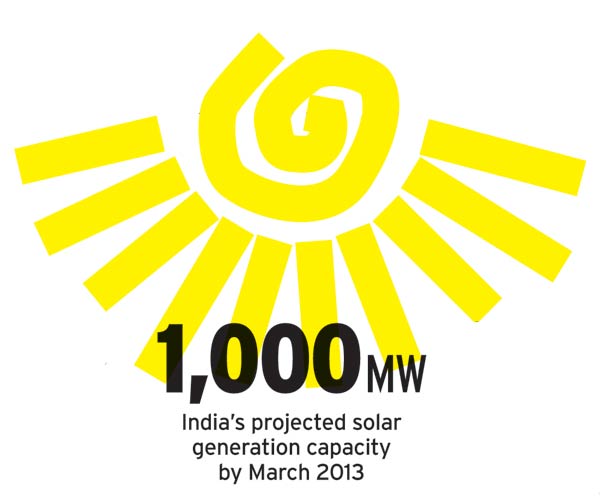 NTPC Vidyut Vyapar CEO Anil Kumar Agrawal believes prices of solar power will be comparable with those of grid or pool power by 2015/16. "Going by what equipment manufacturers are saying, grid parity is likely at between Rs 5.50 to Rs 6 a kWh levels," he says.

According to Priteesh Mahajan, Senior Vice President, ABB India, the real explosion will be in domestic and on-grid rooftop solar panels. "In Australia or Germany, all houses are covered. In India you can generate more power than these countries,'' he says. The multinational makes all the equipment needed to put up solar farms, except modules.

"Going by trends, a developer can hope to make profits eight years after commissioning of a project," says S. Ramesh, Chief Engineer, Renewable Energy, Karnataka Power Corporation. "After eight years, the entire revenue minus running costs becomes the profit, because there is no fuel cost involved." Maslin of IHS Research, however, thinks the real challenge before developers who have quoted low tariffs will be to squeeze profits, as the cost of funds is very high. While solar feed-in tariffs are falling, some lenders feel developers are bidding a bit too aggressively. There have been reports of banks cold-shouldering firms even after the latter produced bankable power purchase agreements signed with government agencies.

On its part, the government is trying to address some of these concerns. "We are organising field visits for bankers so that they know what is happening on the ground,'' says Joint Secretary Kapoor.

NTPC Vidyut Vyapar CEO Agrawal thinks problems with lenders will be fewer after the recent auction. The government should strengthen the renewable energy certificate (REC) mechanism so that projects become bankable, says Green Infra's Nimbargi. State distribution utilities are required to have a certain portion of their input energy from renewable sources. Those falling short of this renewable purchase obligation (RPO) can make up the shortfall by buying RECs. Kapoor says the RPO requirement will be more than 30,000 MW in 2022.

It has been late coming, but the newfound affinity for solar power is welcome. In a few years from now, parts of India may well be using solar power for most of the day.