K.R. Balasubramanyam
Six years after it made its move into India, the Pohang Iron & Steel Company stays halted in its tracks in Orissa. Its ambition to set up a mega steel plant remains stymied. But, quietly and slowly, Posco , as the company is better known, has been spreading its wings in India. Away from the limelight, it has three major projects on course in Maharashtra. Click here to Enlarge
Posco, ranked third-largest steel maker globally, a gilt-edged company which has millionaire Warren Buffett's Berkshire Hathaway owning five per cent of the shares, ended the calendar year 2010 with an output of 33.7 mt, and revenues of nearly $30 billion. The behemoth recognises Maharashtra as home to 45 per cent of India's automobile and 40 per cent of electronic appliances production and aims to eventually become a one-stop shop for all industries' needs. Its strategy is to have the Raigad plants get raw material from all sources, including the mother plants in South Korea, and make products first for India and then for overseas markets. To achieve this, it is building a 360,000-tonne capacity warehouse near Dighi Port. "Our plan is to invest Rs 5,000 crore by 2014 in three factories in Maharashtra and we hope to generate 1,500 jobs there,'' says J.G. Kang, General Manager, Posco Maharashtra.

While Maharashtra has turned out to be an oasis of optimism, Orissa remains a nightmare for Posco. The conglomerate wants primary and value-addition projects to move hand in hand and develop a symbiotic relationship with each other. While relentlessly following up its Orissa plans, the steel maker is also pursuing opportunities in Jharkhand and Karnataka.

Posco's proprietary steel-making technology, Finex, is the envy of its peers and has prodded entities like the Steel Authority of India Ltd, or SAIL, to explore a joint venture aimed more at accessing the technology. Finex involves direct use of pure iron ore (fines) and non-coking coal as feedstock in steel making. "This technology maximises efficiency of steel production as it involves use of fines without pre-treatment. It reduces pollution by 80 per cent, compared to the existing technology and is also cost-efficient," says Sung.

Stalemate
The South Korean multinational signed a memorandum of understanding to set up a 12 mt capacity integrated steel mill project in Orissa, at an investment of Rs 54,000 crore, in 2005. "However, not even an acre of the land we need for our project is yet with us," rues Sung, whose project office functions out of rented premises near the Paradeep port. The integrated project, consisting of a steel mill, a power plant and a port, is assessed to require 4,004 acre in Jagatsinghpur district, but protests and government-level hurdles have crippled its progress.

Gee-Woong Sung, MD, Posco India
At the heart of the delay is the issue of settling of rights of those families whose livelihood is dependent on the forest land. Orissa has to convince the Ministry of Environment and Forests that no non-tribal family can claim to be dependent for its livelihood on the forest lands it intends to hand over to Posco, and hence, the Forest Rights Act, or FRA, 2006 is not being flouted. Only then can the process of transfer of forest land to Posco resume. "We are sending a report to the Environment Ministry indicating our compliance with FRA,'' says Aditya Padhi, Principal Secretary to the Chief Minister of Orissa.

The company is now armed with a conditional approval granted by Union Environment Minister Jairam Ramesh on January 31. It comes with a set of conditions, which Posco and Orissa government say they can honour. But the order has left the protesters fuming. Villagers, under the aegis of Posco Pratirodh Sangram Samiti, or PPSS, have erected makeshift bamboo gates at eight villages identified for land acquisition for the project. These are intended to block the entry of outsiders.

A bamboo gate erected at Patana village in Orissa to keep Posco officials out.
Posco officials insist they have no intention of arm-twisting the villagers. "We do not want even an acre of private land which its owner does not want to sell," says Sung. He says so because private land makes up barely 438 acre of the 4,004 acre estimated for the project. The rest is forest and government lands, sufficient for the company to get cracking on the project. "We recognise the difficulties in land acquisition. Ours will be the most efficient steel plant in terms of utilisation of land in India,'' Sung says. In Andhra Pradesh, in comparison, Brahmani Steel has been allotted 10,675 acre to put up a 10 mt mill. Posco has agreed to pay Rs 17 lakh per acre for the land it gets - accepting the price set by a representative body of stakeholders set up by the state government, the Rehabilitation and Periphery Development Advisory Committee.

It has also agreed to compensate those who stand to lose paddy fields, prawn breeding ponds and betel vines. The package, however, has not cut any ice with PPSS and its supporters. "We cannot allow a multinational to come, destroy our land and livelihood and plunder our natural resources,'' says Prasanta Paikray, the PPSS spokesperson. "There is no way I will leave this place,'' declares Ranjan Swain, a farmer in Govindpur, a village marked for the project.

How important is the gargantuan mill to Orissa's economy? A study by New Delhi think tank National Council of Applied Economic Research in 2006 had estimated that Posco would generate 8.70 lakh person-years of jobs over a 30-year period once it achieves its peak capacity. "We are currently exporting fines. If we are able to use it locally and add value, it will create employment here and provide revenue streams to the state and Centre,'' avers the state's Steel and Mines Minister Raghunath Mohanty. Former SAIL Chairman S.K. Roongta provides a perspective: "Posco will increase competition in the Indian steel sector which is good for consumers. Other companies will respond by becoming more efficient. In the last four years, India has been a net importer of steel, but with increased investments, like the one Posco intends to make, we can eventually become net exporters of steel and value-added products." 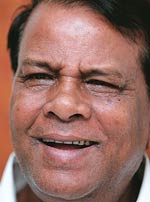 Raghunath Mohanty, Steel and Mines Minister, Orissa
Much as Orissa can ill-afford to lose the project, the steel gorilla, too, can ignore India only at its peril. India and China are the only two countries where steel consumption has been growing at an electrifying pace. In the 10-month period up to January 2011, India produced 54.5 mt of steel, up 10.3 per cent over the same period last year.

In the next five years, the demand for steel is likely to grow at more than 10 per cent annually, as spending on infrastructure projects as well as sales of automobiles increase. Posco is not the only big steel maker with India in its cross hairs: Nippon Steel, ranked fourth in the world by capacity, has teamed up with Tata Steel to produce steel sheets in India, while another Japanese company JFE Holdings, No. 5 globally, has bought a sizeable stake in Sajjan Jindal's JSW Steel to focus on making automobile grade steel.

Why Orissa
Posco's choice of Orissa as the stepping stone for its largest single-location India project was influenced by two factors: the state's rich iron ore deposits and its coastline. Around 35 per cent of India's iron ore deposits lie in Orissa, but only a fraction of it is mined, and an even smaller fraction utilised locally. While reserves in the eastern state are estimated at 5,231 mt, only around 79 mt was mined in 2009/10, of which barely 20 mt was consumed in the state. Similarly, Orissa's long coastline - Posco's plans include building a captive port - facilitates shipments to locations globally.

But nothing has gone right since the decision was made, despite the full backing of the state government. While work on the steel plant remains stalled, even the government's decision to let Posco prospect iron ore at the Khandadhar mines in Sundergarh district was struck down by the Orissa High Court last July, after a local company, Geomin Minerals and Marketing, complained of bias in the decision. The case is now pending before the Supreme Court.

{mosimage}"Security of raw material and logistics are both very important to us,'' says Sung. It has been estimated that, if the steel plant does become a reality, Posco will need around 600 mt of iron ore over 30 years of operation. Observers maintain that Posco will not wait endlessly for a mining lease, and it will still stand to gain if its primary purpose of locating its plant in Orissa is achieved. The mill can run with ore bought from the open market. "Raw material assurance is just one source of competitive advantage," says a sector specialist. "The real advantage lies in a company's capability to service the market in real time." Currently, only Tata Steel and SAIL meet a large part of their raw material needs from captive sources.

Other steel companies have to buy ore in the market. The JSW steel plant at Bellary in Karnataka had been assured a mining lease by the state government, which never came. It did not stop Jindal from either commissioning the plant or even expanding capacity. As for logistics, Posco is firm on having its own captive port. "India has no experience in steel plants with ports. That is how large steel plants the world over are. We need ease of logistics. Paradeep port is already jam-packed.

We cannot depend on other ports for movement of our materials and products,'' says Sung, who retains his optimism on the bigticket investment on the Orissa coast. Both Sung and the Orissa government dismiss any suggestion of Posco relocating its project to another state. "We will give them extension and I am confident the project will come up soon," says the steel and mines minister.

Often the acrimony sounds like an endless battle between reason and rhetoric. While it is still early to say which one will eventually prevail, a number of potential foreign investors are surely watching Posco's India journey very closely.