In the aftermath of the battle for IPL's digital streaming rights, each game has been pegged at Rs 58 crore. But there is a method to the madness

There was a time when over-the-top (OTT) platforms were the dumping grounds for inferior content—from unreleased films to obscure reality shows to recorded (non-live) sports clips. The mass eyeballs and the premium ad dollars invariably went to television. Increasingly, with the boom in smartphone adoption and the spread of low-cost internet, propelled by Mukesh Ambani-owned Jio, the landscape changed dramatically in India. Today, OTTs are mainstream, with sports emerging as the ‘golden goose’ in the segment. Not only is there more money to be made in sports, there’s also more loyal viewership and greater customer stickiness.

In India, sports streaming has always been dominated by cricket. “More than 90 per cent of it [sports streaming] is cricket,” says Karan Taurani, Senior Vice President at brokerage firm Elara Capital. “The rest is non-cricket or what we call ‘emerging sports’, of which football is the largest.”

In terms of viewership numbers, there’s no beating cricket. No surprise then that the streaming rights for showpiece tournament Indian Premier League (IPL) were sold this year to Viacom18, backed by Ambani’s Reliance Industries, for Rs 23,758 crore for a period of five years, with each match costing nearly Rs 58 crore.

Key stakeholders in the business reckon the rights sale was mostly “on expected lines”. “In fact, it was 5 per cent less than what most people had expected. And that is because of the global market conditions right now,” says Pankaj Chhaparwal, Founder, CEO & MD of Cricbuzz (owned by Times Internet, which bagged the IPL’s digital and broadcast rights for the US and Middle East and North Africa, or MENA, region). “There’s been tremendous growth in digital in the last five years. So, it makes sense that digital is as expensive as TV now,” he adds.

According to Elara Capital’s Taurani, however, Viacom18 paid an “extremely high” sum which would be daunting to recover in five years. “The IPL has surpassed many other leagues despite not having a global reach. ARPUs are low here. There is no possibility of a break-even unless it [revenue] grows by 25-30 per cent every year,” he says.

For instance, Disney Star barely managed to not incur a loss in the last five-year cycle (2017-2022) for which it had paid Rs 16,348 crore for the combined TV and digital rights; and this, despite its dominance over subscription and advertising revenues in the sports segment. 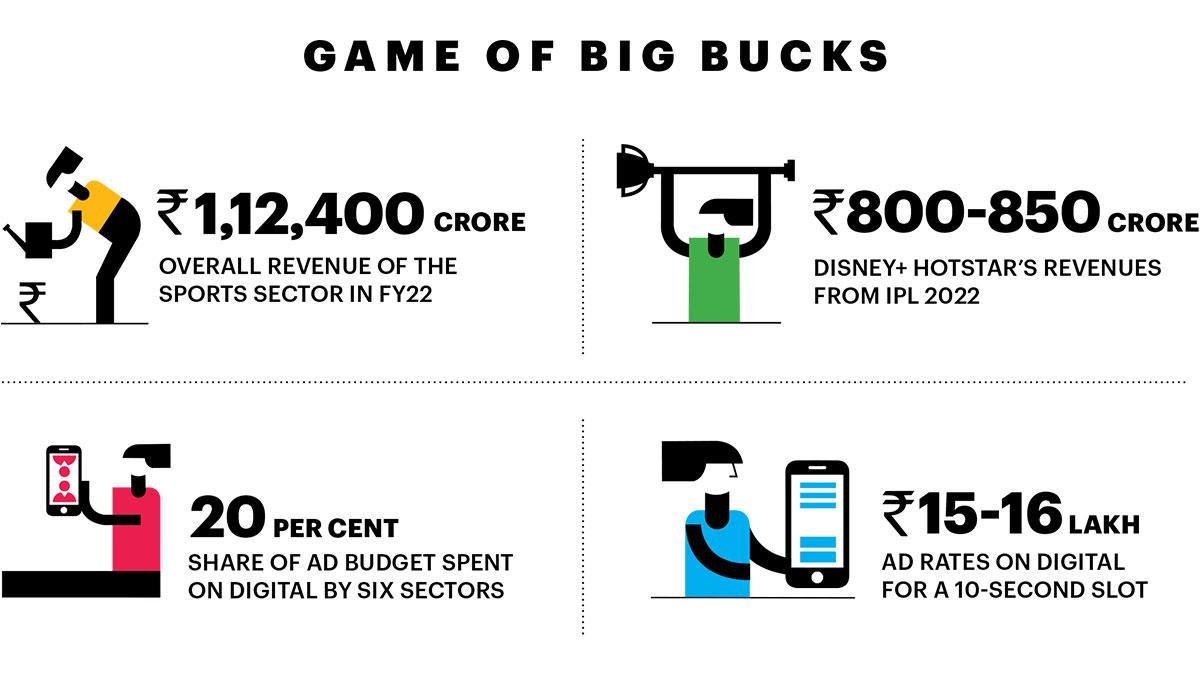 Viacom18’s OTT platform Voot is far from being associated with sports streaming and its current share in the advertising video-on-demand (AVOD) segment is only two per cent, compared to Disney+ Hotstar’s 16 per cent.

“Making money through subscriptions and advertising would be very challenging. Viacom18 would have to grab a 7-10 per cent share of all advertising spends to recover the money. And all media spend will have to move to IPL during those two months. But, we know that won’t be the case,” says Chhaparwal of Cricbuzz.

Taurani, however, reasons that all OTT businesses in India are making losses, and are essentially in the race for customer acquisition. “For them, digital money is more strategic in nature to drive eyeballs to their platforms. They don’t see it as a profit-making exercise yet,” he says.

Method to the Madness

A source with direct knowledge of the matter says that the whole war is for subscribers. “The Rs 23,758-crore investment is to get 500 million people to subscribe to the OTT platform of Sports18 [Viacom18’s sports channel]. Even if you get 10 per cent of the 500 million to pay a monthly or yearly fee, that is a lot of money,” says the source.

Other sources in Viacom18 say that Reliance could end up skipping Voot, and taking the IPL to a new OTT platform and “experience-driven super app”, where people can watch matches, shop for IPL merchandise on Ajio (its e-commerce portal), buy franchise-based match packs, and have other kinds of interactive fan experiences.

So, what’s the game plan? “Right now, nobody knows what avatar it is going to take, but the synergies between Reliance Retail, Reliance Jio and Viacom18 are going to be massive. The goal is to create a digital-exclusive experience, where you’re not just watching IPL, but also interacting with it,” the source explains.

Almost everyone in the business is certain that Viacom18, because of Jio’s 400-million-plus subscribers, will have enormous strategic benefits. All of its subscribers have access to the free JioTV app. “That consumer pool is priceless. At some point, Jio would want to monetise that massive user base,” says an analyst.

Taurani elaborates, “Customers are hungry for bundles and most people access OTT apps via telco partnerships. Jio has the last-mile delivery advantage there and can command a better ARPU than Hotstar. So, Viacom18 sees IPL more as a customer acquisition strategy for them to cross-sell other content to IPL customers.”

At the end of FY22, 85 per cent of OTT viewership in India was generated by telcos through bundled offers, according to a Ficci-EY report. “If you have prime content like IPL exclusively on Jio for two months, people will move from other telcos to access it,” adds Chhaparwal.

Viacom18’s approach to IPL and other sports rights it accumulates is going to be different from that of Disney Star, according to experts. “Voot doesn’t have the technical expertise of Hotstar to telecast live sport. Hence, it has to be a completely new brand path, identity, offering and platform that can become a gateway for even non-sports lovers to consume sports content,” says a source with direct knowledge of the developments.

Interactivity, including new-age tech like Web 3.0 and the metaverse, is going to define sports streaming in future. Industry experts feel “watch, shop, interact and customise” will be the cornerstone of OTTs.

According to industry sources, Viacom18 is actively looking to invest in technologies across video, camera, data and analytics to build new and nuanced customisations and experiences for the IPL. “We plan to invest in significant surround content for IPL that can marry sports and pop culture. We are on the lookout for plug-and-play solutions for interactive streaming. And that is the battle we are fighting with the BCCI (Board of Control for Cricket in India) right now… to allow us to do those things,” says a person with direct knowledge of the matter.

Quidich Innovation Labs, a Mumbai-based sports tech startup that works with various stakeholders in sports broadcasting, including the BCCI, IPL, and other platforms, is said to have held talks with Viacom18 on building these customisations and interactive experiences in the upcoming seasons of the league. “We’ve had deep conversations with all sides soon after the auction. There’s a lot of deep tech innovation using AI, ML and player-tracking engines in real time that we are doing with sports, which is hard for the stakeholders to do themselves. But what these [costly] rights have done is push the broadcasters towards innovation,” says its Founder & CEO Rahat Kulshreshtha.

Globally, sports streaming is increasingly being customised according to each person’s interest and viewing pattern. “There is a fundamental shift in thinking and building for OTT,” says Kulshreshtha. But is there a risk of the cricket being overshadowed by all the razzmatazz? “Innovations happen with the interest of the viewer in mind. The agenda always is to improve the fan experience, but we are not going to oversell,” he says.

What Next for Hotstar?

Disney+ Hotstar, the darling of India’s OTT universe so far with nearly 50 million subscribers, faces an existential challenge, according to some analysts. In the subscription video-on-demand (SVOD) segment, it enjoys a share of 22 per cent, which may drop sharply, with people potentially moving to Voot or Jio, says Elara Capital.

According to Taurani, Hotstar will lose at least 30-40 per cent paid subscribers in the next six to eight months as subscriptions expire. “IPL drives 60-65 per cent of Hotstar numbers. If they don’t replenish it with new cricket rights, the drop will be sharper.”

At present, Hotstar owns the streaming rights for all BCCI cricket matches in India and the rest of the world. It also has the Pro Kabaddi League, the Indian Super League soccer tournament, and rights to premium events like Wimbledon and the English Premier League (EPL). Disney Star had renewed its exclusive broadcast and streaming rights for EPL for the next three seasons (2022 to 2025). For Wimbledon too, it holds the TV and digital rights till 2023.

However, BCCI rights for the next five-year cycle come up for renewal next year. There is no doubt that Reliance and Viacom18 will go at it hammer and tongs to populate their sports library across TV and digital. “One thing we know for sure. Reliance enters a market with one goal in mind—disruption and utter dominance,” says an industry source. “If the path is clear to the management, they will throw their heft behind it.”

And that, as we know, can change the pecking order of sports streaming in India. The game is on!