Just when it seems to be in decline, cricket manages to bounce back. One victory changes everything and all the bad memories are wiped clean.

Shamni Pande
On April 2 last year, Indian cricket was on a high after winning the World Cup. Right through the tournament, stadiums had been packed to the rafters, at least during the India matches. The rest were glued to television sets, transistors and computers, following the action ball by ball. No one was cheering louder than broadcasters and advertisers. With good reason; the real revenue spinners, the one-day internationals featuring India, were a sellout. Broadcaster ESPN-Star Sports earned Rs 800 crore in advertising revenue from 49 matches, thanks to the tournament's high viewership. With the high eyeball count giving them value for their money, advertisers were happy to shell it out - even if it meant paying as much as Rs 5-6 lakh for a 10-second spot after India reached the quarter-finals. Even on the Test cricket ground, it was a feelgood period - India was sitting pretty as the No. 1 side.

Twelve months on, the story could not be more different. The Test team has lost its No. 1 ranking after getting whitewashed 0-4 twice, first in England and then in Australia. In between, it beat a weak West Indies side at home. On the one-day front, it was knocked out of the tri-series in Australia and the Asia Cup in Bangladesh. The bigger loss, however, has been of viewers . The India-West Indies series, the last one held in the country, had ratings of around two. In contrast, last year's World Cup garnered average TRPs of 4.5. A TRP of one means one per cent of all television viewers watched a programme. And a TRP of four or more is considered good by advertisers. Some matches featuring India even saw TRPS touch the 14 mark during crucial periods. But a sustained downtrend set in after the World Cup. The Indian Premier League T20 tournament, which began soon after, got a tepid response. The story was the same for other tournaments.

And then, in the midst of the doomsday predictions, Star Group scored big for the Board of Control for Cricket in India (BCCI). The company, a joint venture between two erstwhile rivals, has clinched a Rs 3,851-crore deal with the BCCI. The deal will give it television and digital broadcast rights for six years over all international matches Dwindling Interest and domestic cricket in India. That works out to around Rs 40 crore per match - significantly higher than BCCI'S deal with Nimbus for Rs 2,000 crore, or Rs 32.5 crore per match, that was scrapped.

So, what possessed Star to pay such a premium? "This is a marquee property in cricket because it is on home ground and the Indian team is stronger here," says Uday Shankar, CEO of the Star Group in India. "There is a robust calendar. And, coupled with ESPN-Star's ICC rights from Cricket Australia and the ECB (England and Wales Cricket Board), it makes us the most-favoured destination for cricket."

Click here to Enlarge
"If it (cricket) is not commercially viable, then it will not be sustainable," says Anil Dua, Senior VP for Marketing and Sales, Hero MotoCorp, which advertises heavily during most cricket matches. "If the value is high, advertisers will stay." Even the IPL, which had a high-voltage start five years ago, has seen ad rates moderate. "Marketers are not willing to pay a huge premium," says Navin Khemka, Managing Partner, Zenith Optimedia, a media buying agency. Last season, ad rates settled at Rs 5 lakh for a 10-second spot after rising for three years. "This season the rates are unlikely to go up significantly," adds Khemka.

Predictably, SET Max, which broadcasts the IPL, believes all is well. "We expect viewership to increase. There was cricket fatigue last year because the IPL came after the World Cup, which was an emotional roller-coaster for viewers," says Gaurav Seth, Senior VP, Marketing and Communications, SET Max. He adds that the channel has increased marketing spends by 25 per cent from last year.

Like Seth, Bigtree Entertainment founder and CEO Ashish Hemrajani is also upbeat. His firm manages tickets sales and related services for five IPL teams, including Mumbai Indians, Delhi Daredevils and Rajasthan Royals, through ticketing site, BookMyShow.com. "Ticket sales are better than last year and even the merchandising that we handle for the Mumbai team has been very good," he says, without specifying any numbers.

A few advertisers will buy IPL time even if viewership falls. "The IPL is the big daddies' game," says Khemka. Brands with big spends go for it. "We evaluate any property in terms of its ability to offer value. It just so happens that the IPL comes during summer, when our business peaks," says Wasim Basir, Director, Integrated Marketing Communications, Coca-Cola India. 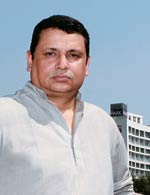 This is a marquee property. It is on home ground and Indian teams are stronger here: Uday Shankar
Vodafone, too, is upbeat about IPL. The company was one of the first brands to hop on to the IPL bandwagon and has been an on-ground associate sponsor as well as a presenting sponsor on TV from the first season. A bilateral series is a different ballgame. The games are longer, viewership is lower, and the ad rate is usually around Rs 1 lakh per 10 seconds. For a one-day match against Australia or Pakistan, it spikes to Rs 2.5 lakh per 10 seconds, half the amount a spot of similar duration cost in the IPL last year.

When weak teams such as Bangladesh and New Zealand are involved, viewership plummets, as does advertising. Often the revenue does not go beyond Rs 8 crore for a match. Perhaps it is not surprising then that bilateral series attract advertisers with budgets as small as Rs 50 lakh to Rs 1 crore.

"Star has the ability to package things better and may have factored in the upside of digitisation," says R.C. Venkateish, former MD of ESPN-Star Sports in India. Even so, he feels the going will be tough for the broadcaster. "Not all matches are of interest," says Venkateish, who is currently the CEO of directto-home carrier Dish TV.

Amar Shankar, Associate Director of Advisory Services at Ernst & Young, a consultancy firm, acknowledges that the list of negatives around the game is rising. But he feels the analysis has to account for the as-yet-small portion of digital rights. "Online and mobile revenues would increase substantially year on year. Today, everyone is looking at content on the move," he says.

Currently, subscription revenues, earned directly from viewers through cable operators and DTH broadcasters such as Tata Sky and Dish TV, constitute just under 15 per cent of the total revenue pie. "Once they have a better handle on content and subscribers, the channel will be able to command a premium. It may be in a position to reduce dependence on advertising revenues," says Shashi Sinha, CEO of Lodestar Universal, a media buying agency.

Star will also be able to promote its more than 30 regional, Hindi and news channels through its sports channels. At least temporarily, this could help it raise viewership of programmes on these channels, as Set Max does for its general entertainment channels, including SAB, Sony and Sony Pix.

So, what does Nimbus Communications founder Harish Thawani, the man who started it all, feel about the shift in the game? "The price of cricket is like that of a painting. The value lies in the eye of the beholder," he says. Except that the company had bought the rights in the hope of making a profit.

But cricket is a strange game. Just when it seems to be in decline, it manages to bounce back. One victory changes everything and all the bad memories are wiped clean, says Coca-Cola India's Basir. And Uday Shankar will be hoping for just that.