Armed with deep pockets and distinguished brands, some of India’s biggest mega-corps are diversifying away from their flagship businesses. Synergies do exist in most cases, but do some of these promoters run the risk of spreading themselves too thin? BT's Anand Adhikari finds out.

In 2002, Wal-Mart created a furore of sorts in the US banking industry when it tried to acquire Franklin Bank of California. The $354-billion US retail giant claimed that it wanted a banking licence to ‘lower its processing costs for certain transactions’.

That didn’t cut much ice with the American regulators, who duly blocked all the moves of this Arkansas-headquartered retailer to be in a position to provide banking services. Wal-Mart did eventually foray into financial services by opening money centres inside its stores.

But the ambition to become a bank didn’t die. Wal-Mart did get its bank—those plans took shape outside the US a year-and-a-half ago, when the 46-year-old retailer bagged a full-fledged banking licence in Mexico.

So, why has Wal-Mart been so keen to take the plunge into financial services, a business that at first blush would appear unrelated from selling groceries, electronics, clothes and gardening tools? Well, the two are not that unrelated actually— retailing is all about purchasing, and banking is all about enabling those purchases. If Wal-Mart has been keen to have a bank, that’s because it’s keen to exploit the synergies between retail buying and banking—after all, consumers can use their bank account, debit card or credit card to pay for Wal-Mart purchases, and in the bargain, avail of discounts and special offers. 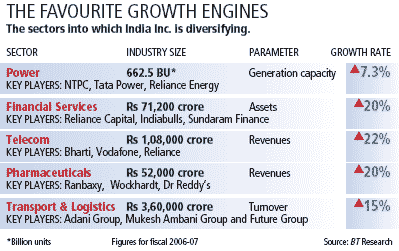 Diversifications—unrelated or related—aren’t alien in global business, and diversified conglomerates aren’t a new phenomenon. Warren Buffett’s Berkshire Hathaway is perhaps the best example of such a growth strategy that’s played out swimmingly well. When Buffett acquired it in the ’60s, it was an ailing textiles firm. Today, Berkshire has holdings in an assortment of businesses that include candy, retail, home furnishings, jewellery, publishing and footwear. GE is another example of a diversified giant that makes aircraft engines and industrial products even as it has operations in power generation, water processing, security technology, medical imaging and consumer financing.

3M in the US, the Korean chaebols (Hyundai, LG, Samsung) and, to a certain extent, DuPont are examples of other diversified business clusters. The advantage of such a posy of unrelated operations may earn the disapproval of management gurus; but they have their advantages, particularly in rough and recessionary times—as the current period— when one business can be better placed to pick up the slack of another.Back home, the Tatas and Birlas are best examples of highly-diversified groups that are growing in various directions, backed in no small measure by a solid financial base. Now, a host of younger Indian companies—a few of which have recently debuted on the stock markets—is seeking to stretch its wings into newer pastures, on the back of a solid, cash-generating flagship business. Many of these newer kids on the block are looking to diversify into related areas, although the synergies are arguably tenuous in a few cases. The objective of such diversifications is similar: To provide a hedge during a slowdown of the main business; and deploy cash generated in that main business into sunrise, highgrowth opportunities.

The King of Indian retail, Kishore Biyani, has the Wal-Mart model on his drawing board, which explains his foray into the nonbanking finance space. Another numero uno, India’s largest real estate developer DLF, is venturing into the concept of real estate investment trusts (REITs). A financial services maverick, Indiabulls, after flagging off a real estate business, is eyeing retail and, more adventurously, power. Consumer durables major Videocon wants to extend its brand into telecom services, as does real estate developer Unitech.

Apollo Tyres sees an opportunity in logistics, and soaps and detergents marketer Nirma wants a presence in pharmaceuticals. This is just a sprinkling of examples of Indian promoters who’ve been bitten by the diversification bug. The common thread running through their ambitions: A strong brand, a stash of cash and the management bandwidth that’s needed to scale up the new ventures in an environment of increasing consumption and sustained high economic growth (the current slowdown notwithstanding).

So, what are these synergies that these mega-corps are eyeing and seeking to exploit? For some, it’s a brand that can be extended into another consumer-oriented service; for others, it’s a nationwide sales & distribution network that could be leveraged; it could also be an opportunity to cut costs and derive economies of scale; and then there’s management synergy, with the core team’s experience and expertise being put to use in multiple businesses. Says V.N. Dhoot, Chairman, Videocon Group: “We have a large network of dealers and distributors in our consumer durables business.” Sure enough, Videocon, which sells 17 million television sets annually, relies on a little over 40,000 distributors.

But it’s not just its reach that makes a diversification into telecom a compelling proposition for Videocon. As Ravi Sharma, CEO of Videocon subsidiary Datacom, puts it: “We also have ownership of 17 million new houses every year (in which Videocon TV sets can be found).” Having already penetrated so deep into the Indian market, Dhoot thinks he’s well placed to provide telecom services to a consumer base he’s familiar with.

For Biyani of Future Group, the reason for complementing his retail business with a financial services arm is simple: He is seeking to drive consumption. Biyani’s business model is to hawk financial products through the 400-odd retail outlets of flagship Pantaloon Retail and its subsidiaries in over 40 cities.

Clearly, the finance arm will drive consumption by providing customers with the means to finance their purchases at the site where the consumption decision is made. The fifth-largest real estate company in the world, DLF, is replicating the global real estate model of holding assets along with real estate development.

Globally, real estate companies’ holdings of assets can be as high as 80 per cent of revenues, with the development exposure remaining low at 20 per cent. Take a look, for instance, at the Singaporeheadquartered CapitaLand, a real esate firm with a significant asset management business. The company runs over a dozen private funds and REITs, and manages assets in excess of Singapore $15 billion.

In fact, CapitaLand is credited with pioneering the concept of REITs way back in 2002. DLF is on a similar track. “We are studying the Singapore model, where real estate companies hold assets and also do development,” says Saurabh Chawla, Executive Vice President, DLF. For its part, the cash-rich DLF (cash flows in its flagship business are to the tune of Rs 4,000 crore in terms of net profits till December quarter) is in a hurry to step on the growth pedal by diversifying; recently, it did apply for a telecom licence, but chose to withdraw it eventually.

If DLF did venture into telecom, it would be difficult for the promoters to justify synergies with real estate. But then, if diversifications are a growth gambit, do they need to be synergistic at all? Perhaps not.

If you have the financial muscle, and there are high-growth sectors that aren’t yet saturated with a rash of me-toos, spreading wings into unchartered territory could be risky but not necessarily foolhardy. That may just explain why the Apollo Group, which has tyres as its main business, chose to get into logistics; synergies between tyres and transport could exist if you push the boundaries of credulity, but mercifully the Kanwars of Apollo aren’t doing that. For them, logistics is simply an opportunity that’s waiting to be exploited. “We scanned the environment and found a huge requirement for logistical support services fuelled by the booming exports and retail sectors,” says Raaja Kanwar, Managing Director, Apollo International, the logistics venture of Apollo Group. The company aims to handle containerised cargo-facilitating customs clearances and storage & warehousing. And Gagan Banga, CEO, Indiabulls Financial Services, the financial services arm of the Indiabulls Group, says: “The whole game plan is esssentially to grow and chase high growth sectors.”

And that could involve getting into businesses ranging from retail to special economic zones to power— which is exactly what Indiabulls has in its sights. Diversifications doutbtless make for sexy headlines, but they can also be disastrous—and it’s such diastrous attempts at venturing too far away from the core that prompted Wall Street investor Peter Lynch to coin the term ‘diworsification.’ True, there are the GEs of the world that have created shareholder value by growing new businesses, but the industrial landscape is littered with carcasses of failed diversifications.

Remember an American telecommunications company called ITT Corp? It doesn’t exist any more—it folded operations in 1995—thanks to a series of unrelated diversifications. Back home in India, the Nandas of Escorts couldn’t go all the way with their diversifications into telecom and hospitals; and the B.K. Modi Group’s attempts to start ventures with foreign partners (like Xerox, Olivetti, Alcatel and Motorola) didn’t set the Ganges on fire.

Yet, global alliances may just be the way to go for Indian promoters looking to stretch their wings. Whilst they may not need capital, they could sure do with the expertise of established international leaders in their respective fields.

DLF, for instance, has roped in the US-based Prudential Financial Inc., which is amongst the top five insurance companies in the world, as its joint venture partner. Prudential Financial Inc., which uses the Pramerica brand name in select countries (and it is using it in India, too), is a financial services leader with approximately $648 billion of assets under management.

Videocon, too, is looking at a partnership model for its wireless foray. “There are 3-4 large global players talking to us,” says Dhoot. AT&T is also eyeing a stake in Videocon’s Datacom. And there’s the Future Group. “We believe in alliances and partnerships,” says Biyani, who has Italy’s Generali as a JV partner in insurance. Apollo has Canada’s Spire Group as a JV partner for constructing and operating temperature-controlled warehouses in India.

“There is a demand for modern temperature-controlled warehouses to comply with international health and safety standards in the Indian markets,” says Kanwar.

Partners can bring in strategies and know-how but you still need people—the right people—to build and form teams, and execute the blueprint. CEOs, for their part, have realised that just strategies aren’t enough—without people, there can’t be a new venture. As Indiabulls’ Banga puts it: “We will go for new businesses as and when we are able to increase our management bandwith.”

The people are coming from all over. Biyani roped in Samir Sain (who is also a co-promoter) from Goldman Sachs to head financial services, and G.N. Bajpai, a former Chairman of the Securities & Exchange Board of India, as a Director on the board of the holding company.

Dhoot has roped in Alcatel’s India CEO Ravi Sharma, who had built Alcatel’s India operations from scratch, and taken to a revenue base in excess of Rs 5,000 crore. Vijai Mantri has joined as CEO & MD for DLF’s asset management foray. Mantri had earlier served as CEO of Deutsche AMC, and as Vice President of mutual fund sales & distribution at HDFC AMC. DLF Pramerica has Kapil Mehta (ex-McKinsey and ex-Max New York Life) as its CEO.

Once the plans, partners and people are in place, the purse-strings start to loosen. The 60-year-old DLF, which went public only a year ago, plans to invest $250 million (Rs 1,000 crore) over 7-10 years in the life insurance venture (the regulator’s approval is awaited).

Videocon has lined up an investment of Rs 6,000 crore, and Indiabulls will sink over Rs 10,000 crore in a power venture. Those are big numbers, but then so are the ambitions. “We would like to be amongst the top five players in 2-3 years,” says Dhoot.

The Videocon telecom venture aims to have 25 million subscribers in the next three years, and 40 million in the next five years, says Sharma of Datacom. Dream on.