The sugar industry stares at an unprecedented glut

The sugar industry stares at an unprecedented glut - all because of excessive state control. The years ahead could well see the sugar industry in a deeper crisis if production rises further and government policy remains inflexible.

K.R. Balasubramanyam
A spectre is haunting sugar mill owners across the country - the spectre, not of scarcity, but of plenty. They fear they will soon have too much sugar on their hands, and too few buyers. Sugar prices may fall steeply, eroding profit margins. By the end of this year's sugar cycle that runs to September, the 527 functioning sugar mills in the country - there are 664 in all - are estimated to have produced around 24.2 million tonnes, or MT. Add to this the surplus of five MT from the previous year, and the total sugar available would be around 29.2 MT. With domestic demand pegged at about 21 MT, and exports of 2.6 MT allowed, 5.6 MT would still be left over.

That may still be manageable. But the bad news for the industry is that the coming year promises to be another bumper one, since the sugarcane crop - currently being harvested - has been excellent. Encouraged by this year's high payments, more farmers switched to growing sugarcane.

Insiders in this Rs 75,000 crore industry estimate that even after meeting domestic requirements, they will have a surplus of 9.58 MT by end of September 2012. The excess sugar will either rot in godowns or dampen prices in the domestic market. 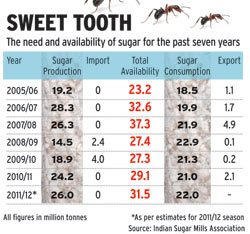 No doubt this is not the first time the industry has had to cope with a glut. It had larger surpluses of around 10 million tonnes annually, for instance, between 2007 and 2009. But some of these years were serendipitously years of low production as well, so the domestic market consumed the excess. Besides, various soft loans and export subsidies the government had provided between 2006 and 2008 helped mill owners pull along. For next year, there are no such cushions visible as of now.

INTERVIEW: Not against lifting levy on sugar, says KV Thomas

Why not export? There lies the nub. The government decides every year whether sugar mills should be allowed to export, and if so, how much. Ironically, international sugar prices are currently at a high - the result of the world's top sugar producing nation Brazil's crop having been unexpectedly poor - and Indian sugar mills would have made handsome profits had they been allowed to access world markets. "In the last 20 years, this is the first time international prices are high when India has a surplus," says Abinash Verma, Director General of industry lobby, Indian Sugar Mills Association, or ISMA.

The curbs on export are only one of a host of controls the sugar industry labours under. All sugar mills, for instance, must compulsorily sell 10 per cent of their production to the government at a discounted price - called levy sugar - to feed the public distribution system, or PDS. The Ministry of Consumer Affairs, Food and Public Distribution, which monitors the collection of levy sugar, also lays down how much sugar a mill can sell in the open market each month - called the 'release mechanism'.

Other ministries specify the thickness and quality of the jute bags used for sugar packaging; the pricing of the sugarcane extract fuel ethanol, and how much of it should be blended with petrol. So too the price at which mills buy sugarcane is decided by the Centre and the governments of sugar-producing states. "Since 1991, all sectors have gained handsomely from liberalisation, except the sugar industry," says Ajay S. Shriram, Chairman and Senior Managing Director, DCM Shriram Consolidated, which owns four sugar mills in Uttar Pradesh.

In the sole concession to liberalisation, the levy sugar quota has been reduced in the last decade, from 40 per cent through most of the 1990s to 10 per cent currently. But it is still the government, the buyer, which sets the levy sugar price - which the mill owners complain is even lower than their production cost. They want levy sugar scrapped altogether. "Since the levy sugar price is below the cost of production, the industry collectively loses between Rs 2,500 and Rs 3,000 crore every year," says Shriram. The price varies across states and sugar zones; in Karnataka it is currently Rs 1,857 per quintal. "This is about Rs 700 below the market price," says Nagarajappa, Chairman of the Karnataka government-owned Mysore Sugar Mill, or Mysugar. Even this payment is delayed because the government does not lift the levy stock on time. Nagarajappa, who goes by one name, says around 9,000 quintals of levy sugar the government should have picked up in 2004/05 is still stored at his mill in Mandya, near Bangalore.

Equally irksome is the release mechanism. Twice in the last 11 months Mysugar moved the Karnataka High Court, seeking approval to sell 75,000 quintals of sugar it was sitting on, in the open market. Much to its relief, it got a favourable verdict. "We have a debt of Rs 284 crore, yet do not have the freedom to sell a single bag of sugar," says Nagarajappa. "It is excessive controls which have contributed to our factory incurring losses every year and becoming sick." The curbs frequently lead to a cash crunch for the mills. "Sugar factories crush about 85 per cent of cane between the months of November and March," says ISMA's Verma. "It is during this period they need cash to pay growers, but regulated releases of sugar have impaired cash flows and their ability to pay." Lorries waiting to unload sugarcane at Mysugar's factory in Mandya, Karnataka
While the selling of sugar faces all these roadblocks, the cost of the main raw material, sugarcane, keeps rising. Every year, the Centre sets a 'fair and remunerative price', or FRP, for sugarcane - the minimum mills must pay cane growers, and invariably higher than it was the previous year. Often the governments of the sugar-growing states - Uttar Pradesh, Maharashtra, Karnataka, and Tamil Nadu - then improve on the FRP by announcing a state advised price, or SAP, which mills in their respective states have to comply with.

Since 1991, all sectors have gained handsomely from liberalisation, except the sugar sector: Ajay S. Shriram
The tightening economic environment is also making mill owners nervous. Not only are carrying costs rising, says Shriram, "in little over a year, banks have revised interest rates 12 times.'' Murkumbi claims the industry is paying around Rs 2,000 crore annually in interest costs.

The case for retaining controls on the sugar industry has often been made by politicians and government spokespersons: letting go could lead to hoarding, artificial scarcity and price rise. As Union Minister for Consumer Affairs, Food and Public Distribution K.V. Thomas notes sugar, like onion and potato, is a sensitive commodity vulnerable to extreme price fluctuations. "If sugar prices go up, there will be a ruckus," he says. He also insists that levy sugar is important to the government.

"I am not against lifting levy, but it is the only option available to strengthen the PDS," he adds, referring to the Public Distribution System. Even so, the Prime Minister-appointed committee under C. Rangarajan, Chairman of the Prime Minister's Economic Advisory Council, which is examining the sugarcane pricing formula, is likely to look into the entire issue of sugar decontrol.

Click here to Enlarge
Some mill owners maintain the government need not be unduly concerned about a spike in sugar prices. "The share of sugar in total consumer expenditure is just 2.4 per cent in rural India and 1.5 per cent in urban India," said Rajashree Pathy, Chairperson and Managing Director of Rajashree Sugars, at a recent event organised by the Confederation of Indian Industry.

"You cannot have high sugarcane prices, low retail sugar prices and a viable industry, all at the same time,'' he says. Verma says all the industry expects is phased deregulation. "The Centre can begin by ending the release order mechanism and the levy obligation,'' he adds.

The years ahead could well see the sugar industry in a deeper crisis if production rises further and government policy remains inflexible.