Mismanagement has pushed the Tamil Nadu Electricity Board to the edge. And recent measures to revive it may fall short.

A wind farm in Muppandal, Tamil Nadu
It's not hard to see why India's tryst with wind energy began in Muppandal (in the 1990s). In the first week of June, a slight drizzle heralded the arrival of the Southwest Monsoon in the small town on the Tamil Nadu side of the Western Ghats. With each hour, the wind blowing through the many passes of the cloud-kissed Ghats grew stronger. These high-velocity winds, which last for six months, make the Muppandal region one of the windiest in the country. This year the winds set in early, yet, investors, who have set up over 3,000 windmills in the region, are worried. They fear the Tamil Nadu Generation and Distribution Corporation (TANGEDCO) will not be able to harvest the energy. "There is wind. There are windmills to generate power and meet the deficit. But the power utility lacks evacuation capacity (infrastructure to take the wind power onto the grid)," says A.V. Dharmakrishnan, CEO of Madras Cements. His company is the largest investor in wind energy in Tamil Nadu, and has a generation capacity of 154 MW.

At 8,500 MW, TANGEDCO'S power generation falls well short of Tamil Nadu's peak demand of 12,500 MW (see Widening Deficits). While wind energy will not make much of a dent in that deficit, the utility's inability to make use of the cheap energy from Muppandal is incomprehensible. Last year alone, an estimated 350 MW, about 10 per cent of the state's total deficit, was lost during the peak season. In many ways, the inability to harness wind energy epitomises the state of affairs at the Tamil Nadu Electricity Board (TNEB), TANGEDCO'S parent. In a recent report, the Comptroller and Auditor General of India (CAG) castigated TNEB and its subsidiaries for "lack of proper planning and synchronisation of all (expansion) activities". That lack of foresight has run the once-efficient TNEB into the ground. It has defaulted on payments, failed customers - both industry and the common man - and is hurtling towards bankruptcy. In 2010/11, the last year for which figures are available, its revenue deficit stood at Rs 14,313 crore and accumulated losses topped Rs 50,000 crore. "It is a colossal management failure," says a TNEB veteran who did not wish to be identified.

The impact of the mismanagement has been severe. Debilitating power cuts have hurt industrial competitiveness and demolished Tamil Nadu's image as a favoured investment destination. TNEB has lost its most prized customers, large industries, who have chosen to invest hundreds of crores to set up captive power plants rather than rely on it for power. These include cement companies such as India Cements and Madras Cements and high-energy consumers in other sectors. 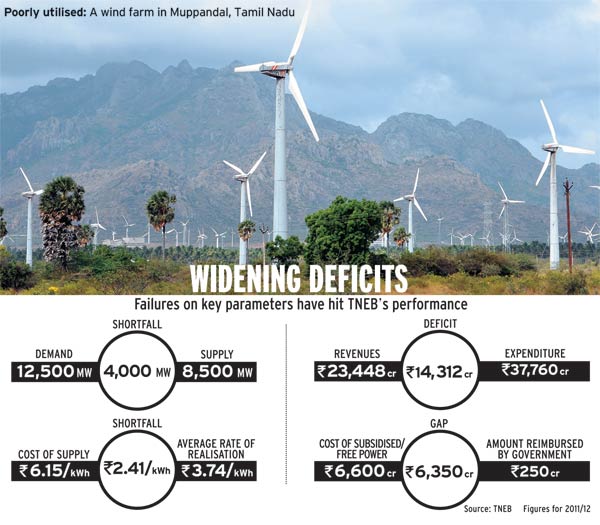 On the generation side, TNEB has added just 333 MW of capacity in the last seven years when demand actually rose by more than ten times that (see Road to Ruin). The last major power project executed in the state is the 630 MW North Chennai Thermal Power Plant back in 1995. "Prior to 1990, we were investing regularly in capacity augmentation. Then policies changed and the private sector was encouraged to generate power," says S. Akshayakumar, Director, Transmission Projects, TANGEDCO.

But the private sector failed to deliver. In the 1992 to 94 period, more than two dozen agreements were signed with private players, of which only five materialised. Similarly, between 1998 and 2003, 20 short-gestation projects were signed of which only two went ahead. This should have set alarm bells ringing in the imposing TNEB headquarters on Anna Salai, Chennai's arterial road. However, the utility failed to act. When it finally awoke in 2005/06 and announced a few projects, the demandsupply gap had widened. Worse, the projects were delayed.

"Had they come up on time, we would still have avoided the present crisis," says Rajeev Ranjan, TNEB'S Chairman and Managing Director, who was brought in last year to turn the utility around.

If TNEB fell short on forecasting demand and augmenting supply, its financial management was a disaster. Year after year it yielded to pressure from the state government and failed to revise tariffs. In the 2000 to 10 decade, it sought tariff revisions only three times even as costs shot up. Some of these were partially rolled back later. The recent revision in April 2012 was the first one in five years.

But it will take a lot more to undo the damage. With power, fuel, wage and interest costs shooting up, TNEB'S average realisation in the last five years amounted to just Rs 3.74 per unit against an average supply cost of Rs 6.15 per unit.

"Failure to revise tariffs annually is the major reason for under-investment by TNEB," says Kameswara Rao, Energy, Utilities and Mining leader at PWC. Also, with successive governments unwilling to bear the subsidy cost, the management meekly agreed to carry it on its books. According to TNEB estimates, 11 billion units, worth Rs 6,600 crore, are given as free/subsidised power annually. Until last year, all that the utility got from the government was Rs 250 crore towards the subsidy.

"To bridge the revenue deficit and fund the subsidy, TNEB had to borrow heavily and this hurt its finances badly," says G. Rajagopal, Director (Finance), TANGEDCO. That has left it with a debt burden of Rs 45,000 crore and a 'junk' credit rating.

The utility has also failed to adhere to various regulatory norms and orders, including those on metering agricultural connections, proper treatment of transmission and distribution (T&D) losses, or removal of cross-subsidisation.

TNEB'S relatively decent T&D loss of 18 per cent - the national average is 27 per cent - has been questioned by the regulator. The lack of proper metering makes it difficult to distinguish between theft, subsidised power and the actual T&D loss.

Of this, over Rs 2.5 trillion will be utilised to augment power generation capacity by 20,000 MW, and the rest used to develop transmission and distribution infrastructure.

This includes setting up a separate feeder line for agriculture and establishing a dedicated corridor to evacuate power generated by windmills. Immediately, the state government has given TNEB an Rs 11,000 crore guarantee to meet its obligations. "Delayed projects have been given priority," says Ranjan. "From April, the tariff has been revised sharply to generate an additional 7,875 crore in 2012/13. We should have a power surplus by end-2013."

But achieving a power surplus would not necessarily signal a revival at TNEB. The core issues that led to the current crisis are yet to be addressed. This includes reforming the electricity board, which has grown too big to govern.

"We have unbundled TNEB into a holding company, with two operating companies handling generation/distribution and transmission. Staff and asset separation is yet to be done," says Ranjan. That is a big task as the labour unions are fiercely opposed to the plan. "The failure to pursue meaningful structural reforms precipitated TNEB'S slide… and worse, is starting to put off new investors," warns PWC'S Rao. The utility will need to seek annual tariff revisions and make it clear that while it is the government's prerogative to offer subsidies, it will not carry that burden on its balance sheet.

While that will be no easy task, Madras Cements' Dharmakrishnan and other corporate leaders are hopeful that the new management at TNEB will be able to deliver on the government's promises. And that Muppandal's wind will do more to ease Tamil Nadu's power problems.