The Unique 'Hub-and-Spoke' Model of Applause Entertainment, the Makers of 'Scam 1992'

A unique hub-and-spoke model has created a niche for Applause Entertainment's content factory, led by its biggest hit to date, 'Scam 1992'. Can the Sameer Nair-led content studio keep going?

A unique hub-and-spoke model has created a niche for Applause Entertainment's content factory.

A few weeks before the release of the show Scam 1992: The Harshad Mehta Story, media veteran Sameer Nair, 57, had the butterflies swinging a party in his stomach. Had he taken a risky bet? After all, who would care about a scam that happened in the 1990s, being played by an unknown Gujarati actor? But in October 2020, when the show released on OTT (over-the-top) platform SonyLIV, it laid the butterflies to rest. It sped to the top and kept speeding. So much so that in the history of Indian OTT, only one show—The Family Man (Season 2) by D2R Films on Amazon Prime Video—ranks above it on the all-time list of greatest Indian web hits, according to data compiled by Ormax Media.

In the process, Scam stamped its maker Applause Entertainment’s presence firmly on India’s OTT map, and dramatically changed things for SonyLIV as well. In just four months, SonyLIV gained a paid subscription base of 2 million and 60 million installations. The daily average premium subscriptions on SonyLIV shot up by 143 per cent because of the series. Naturally, Danish Khan, Head of SonyLIV, Sony Entertainment Television & Studio Next, is effusive: “Nair’s vision, knowledge of this space and audience, and willingness to take calculated risks makes Applause an influential content voice in India.”

The success of Scam took its time coming, though. “It was our 20th show,” says Nair, the CEO of the Aditya Birla Group-owned company. “Before that, we had done Criminal Justice, Hostages, City of Dreams, etc., but Scam changed the game for us.” Indeed. Nair, who has a sense of calm quite alien to entertainment honchos—possibly derived from the piles of books on history, philosophy and science that he devoured in his growing-up days—bided his time and finally hit the jackpot.

Again. Remember, the bespectacled, ever-smiling graduate of physics, economics and hotel management has had a long history with game-changers. At the turn of the millennium, he was instrumental in bringing about the resurgence of movie superstar Amitabh Bachchan with his TV debut Kaun Banega Crorepati. That, and other popular shows like Kyunki Saas Bhi Kabhi Bahu Thi and Kahaani Ghar Ghar Kii produced under Nair changed the fortunes of the Star Network almost overnight. He was also one of the first to foresee the rise of OTT in the country. As Group CEO of Balaji Telefilms, he launched ALTBalaji way back in 2014. For perspective, both Amazon Prime Video and Netflix entered India in 2016.

While finishing his stint at Balaji around 2017, the idea of creating a content and IP studio struck him as he anticipated the growth of the OTT industry. “We decided to build a studio that caters to all streaming platforms,” he says, which is in contrast to the commissioning model in vogue in television, his erstwhile grand theatre. In television, the channel also owns the intellectual rights to the shows it commissions.

But Nair was not to be satisfied with commissioned shows owned by others. So, he decided to adopt the cinema business model.

In the traditional movies business, you don’t ask the exhibitor or distributor: ‘Should I make a movie?’ You make it; it’s either a hit or a flop. It helps us keep a certain integrity of the creative process,” he says. Nair and his team devised what they call a ‘hub-and-spoke’ model: “We are a creative studio that creates content, and owns its intellectual property rights. Our studio will be the creative and commercial hub, and we would work with a variety of spokes.” Applause commissions a show, shoots, edits and post-produces it, and then approaches OTT platforms with a finished product.

In the highly competitive OTT landscape, how does it decide which platform to prefer for which kind of content? “We try and create content for audience cohorts and tribes,” says Nair. “We hope that when we show our content to platforms, it resonates with them and helps build their own programming strategies. We don’t choose platforms; they choose shows.” Adds Deepak Segal, Applause’s Chief Creative Officer: “Our model is something never seen before. We put our money behind the whole series.” That sounds awfully risky from a business perspective, but Nair sees it as a “combination of gut, common sense and market intelligence”, which helps in making informed decisions.

The platforms themselves took their time to warm up to this new ‘model’, especially when the IP rights would not be owned by them, but Nair found his way. “The licensing and commissioning models will co-exist as demand is higher than supply for high quality 300-500-minute web series,” says SonyLIV’s Khan. “However, the most important factor is the quality of the content, and Applause has consistently given high-quality shows in the past two years. It has been producing engaging, bold, and daring stories.”

Applause’s strategy is outlined by Segal, an alumnus of FTII Pune with over three decades of experience in driving content strategy for Fox Television Studio India, Sahara Motion Pictures and Star India, among others. “Content as an art need not be a success,” he points out. “We make premium dramas, which have to reach out to an audience at an emotional level and not necessarily at an esoteric level. With our long history in film and television, we sit in the middle trying to marry the premium-ness of film and accessibility of television.” Yet, even as he spends days poring over heaps of scripts and watching endless edits of his shows all day long, Segal feels it’s very difficult to gauge what works: “You never start to make a flop. You want to make a Scam every time. Our attempt is always that.”

There aren’t any staff writers at Applause. It instead works with independent talent aligned with different productions and directors depending on the project. The company is now collaborating with production companies like BBC Studios, Emmay Entertainment, Rose Audio Visuals, Banijay Asia, Endemol Shine, etc., and fostering partnerships with global streaming platforms like Netflix, Disney+ Hotstar, Amazon Prime Video, SonyLIV, ZEE5, Voot Select and MX Player for its creative output. In five years, the content studio has produced over 34 series including recurring seasons of Indian adaptations, book-to-screen re-imaginations and originals, and is diversifying into newer content formats including movies, animation, and documentaries for streaming on these platforms. “There is still a need gap of almost 200 more shows,” says Nair. 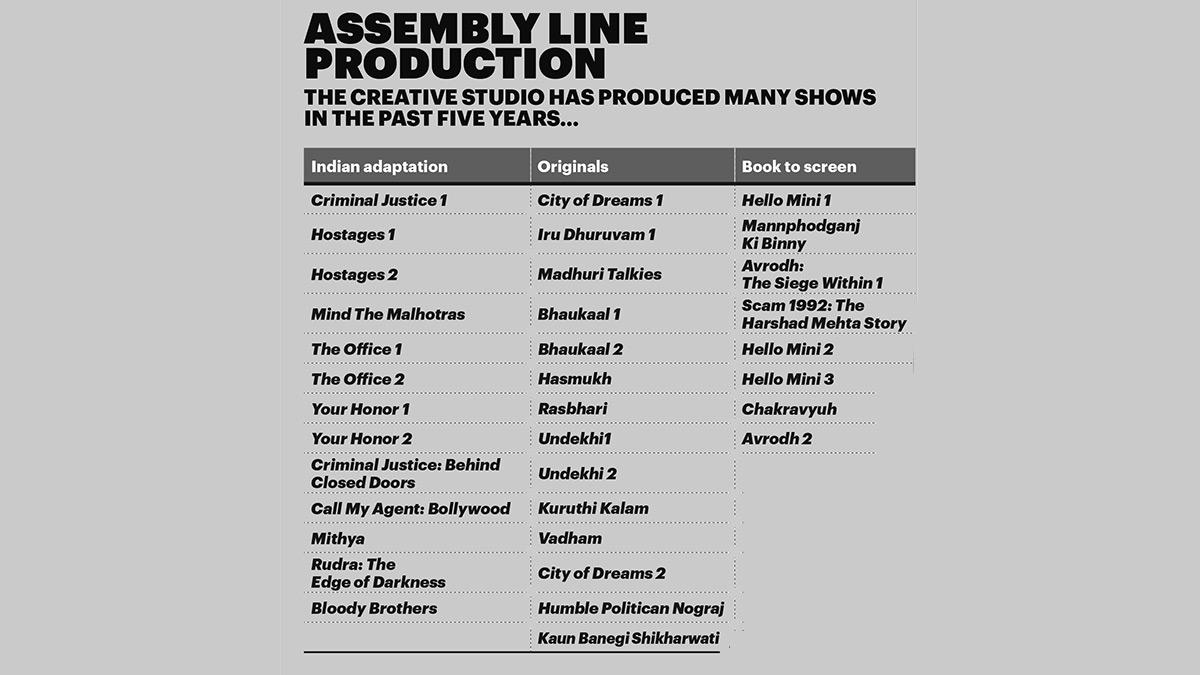 The content strategy seems to be working well. Apart from SonyLIV, Applause has had success with platforms like Disney+ Hotstar with Rudra, and its show Mithya attained the biggest opening for any original series for ZEE5. The company gained early success on the back of its adaptations and the team is never shy to admit that at that time, adaptations were the only thing that could work at scale instead of originals. “It helped us get off the blocks faster, because Indian writers hadn’t written premium content at the volumes it is being written today,” explains Segal. “There are different character arcs in eight episodes, different dramatic points. It was a learning curve for us also, which is why doing adaptations was easier.”

At the same time, there have been misses, too, with shows like the Indian version of The Office, and Vir Das’s Netflix series Hasmukh, which didn’t land. While creative success has been good for the company, financial success has been modest with a profit of Rs 11.1 crore on total income of Rs 254.21 crore in FY21, says data from the Ministry of Corporate Affairs.

For sure, the entertainment industry is a minefield of challenges, and Applause will have to contend with its share. “The Indian SVOD (subscription video on demand) market has crossed 100 million subscriptions, but it remains under-penetrated at 10 per cent of households. There is a need to build more width and depth of content to win the next 100 million subscriptions. A steady cadence of fresh and varied content means leading platforms will have to introduce 4-5 new originals each month,” says Mihir Shah, VP at Media Partners Asia. “Secondly, the need gap for quality content and the growing competition amongst platforms augurs well for production houses, particularly those with a proven track record. Moreover, unlike television, online video is a seller’s market where established studios are in a position to retain IP.”

In this context, Shah feels Applause’s model works because an OTT platform gets a ready slate of content. “Players like Applause take the upfront risk, though this is partially hedged as the content is based on proven formats and popular books. Investors for long have been eyeing opportunities in the creative economy which can build long-term value. With access to funding, several independent and established television studios like Endemol are charting similar plans.” 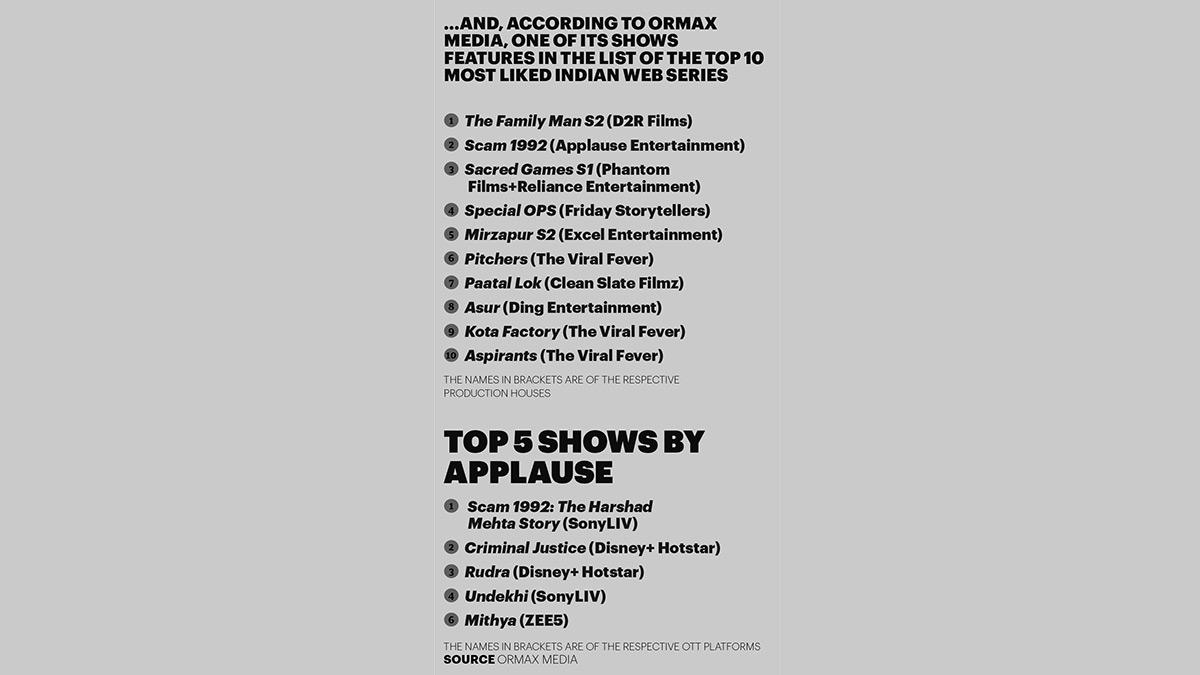 Applause aims to produce 10-15 shows and six to eight movies this year. It has announced Tanaav, an Indian adaptation of the hit Israeli drama series Fauda for SonyLIV. It’s also working on a sequel to Scam. This time, it would be on the 2003 stamp paper scam by Abdul Karim Telgi based on the Hindi book Reporter ki Diary by journalist Sanjay Singh, who is credited with breaking the story of the scam. Also in the pipeline is a biopic on Mahatma Gandhi based on the writings of historian and author Ramachandra Guha. It has also acquired the licence to the comic series library of Amar Chitra Katha to retell 400+ Indian mythological stories through an animated web series.

The content studio has no interest in turning into a streaming platform itself but it does want to expand its horizons in films. “We always wanted to do films but we started with series because we thought it’ll give us more discipline,” says Nair. “We have already made six to eight films, which were direct to platforms. In phase 2, we’re working with different co-productions and aiming for larger scale of movies.”

The company’s Chief Business Officer Prasoon Garg believes that with competition increasing and international players like HBO Max entering the market, there would be more growth opportunities for the company. “The number of shows are going up, the amount of money they’re spending per project is also going up. We’re still far away from creating those 200-300 high quality shows that we want to do,” he says.

For Nair, finding new stories that resonate with the audience is a big challenge. With production houses like Yash Raj Films beginning to make exclusive content for OTTs, and competition from international players, studios like Applause hardly have the time to rest on their laurels. “We run like a start-up. The bar for storytelling is constantly high and audiences are like kids in a candy shop. We’re constantly competing with cooler stuff, international content. The market is rising, [we’ve to] at least keep up if not stay ahead,” he says.

Clearly, Part 2 will be tougher for Nair and his team. But for now, he’s earned the applause.