Toll road developers are making the most of the country's ambitious highway expansion plan but challenges remain.

Delhi-Gurgaon Expressway Toll Plaza
Manu Kaushik
In February 2010, the Ministry of Road Transport & Highways set up a committee headed by Nandan Nilekani, Chairman, Unique Identification Authority of India, to find ways of combating the growing pilferage of revenues at toll plazas across the country. Five months later, the committee released its report recommending that the Radio Frequency Identification, or RFID, technology be introduced to help plug the leakages.

Besides being cost-efficient, RFID ensures transparency in toll transactions, reduces traffic congestion and increases convenience for commuters. The report was accepted by the ministry with a target to kick-start the nationwide adoption of RFID by May 2012.

The setting up of the Nilekani Committee is only one of many steps being taken - some by the government and some by the private toll management industry - to combat the challenges toll plazas face. Leakages here are high. According to estimates by the ministry, for instance, the National Highway Authority of India, or NHAI, incurs an annual loss of about Rs 300 crore or 15 per cent of its total toll revenue.

On the other hand, margins are moderate. "Typically, we benchmark the internal rate of return, or IRR, at around 14 per cent for Build, Operate and Transfer, or BOT, projects. But this is subject to change based on the prevailing interest rate scenario, competition and other macro factors," says Ravi Sreehari, Associate Vice President (Business Development), IL&FS Transportation Networks Ltd, or ITNL.

In a BOT project, after bagging the contract, the developer raises funds, completes the project, and operates it for a specified period which varies from 15 to 30 years, before handing it over to NHAI or the concerned state agency. During this time, he has to meet all the expenses, including debt service, maintenance and additional capital expenditure out of the toll revenue he earns. Most private players, then, are working on multiple fronts to drive top-line growth.

While toll projects were spearheaded by the NHAI and state governments for a long time, the entry of private developers and specialised toll management companies in recent years is changing the way the industry operates. There are currently 170 toll plazas on the national highways, of which 100 are run by the NHAI. The remaining 70 are operated by road developers and specialist firms under the BOT scheme.

ITNL, which operates six toll plazas covering an aggregate length of 3,326 lane km, collects Rs 86.80 lakh daily. The company will roll out five more toll projects by 2014, which are expected to raise its daily toll revenue to Rs 3.4 crore.

IRB Infrastructure also expects a quantum jump in its toll revenue as it adds six new projects soon to its existing 10. Currently, it has about 5,735 lane km under its charge, and expects to clock Rs 850 crore revenue in this financial year. "We are commissioning two new projects over the next year, which will raise toll revenue to Rs 1,000 crore by financial year 2012-13 ," says Virendra Mhaiskar, Chairman & Managing Director, IRB Infrastructure Developers.

Efficient toll collection is a crucial aspect of managing road projects. "We need to ensure that all the toll revenue is collected and toll roads and plazas are well maintained for good user experience," says Sreehari of ITNL. To plug leakages, private developers are gradually moving away from manually-operated toll booths to those that use smart cards or tag systems, which reduce manipulation and errors. 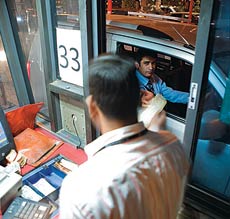 Efficient toll collection is a crucial aspect of managing road projects.
While companies like IRB and ITNL operate their own toll plazas, a new breed of operation, maintenance and tolling (OM&T) companies, which specialise in running toll plazas and maintaining roads, is also setting up shop in India. These firms claim to bring professionalism and better efficiencies to toll collection.

Egis Infra Management India, or EIMI, a joint venture between France-based Egis Road Operation and DSC, was the first specialist OM&T firm to enter the market last year. "Running toll plazas and road maintenance is not a core area for concessionaries.

Click here to Enlarge
Managing urban highways is more complex than it seems because of the large traffic volumes. By outsourcing the OM&T, the concessionaire can raise toll revenue by as much as 25 per cent," says Patrick Viellard, CEO of EIMI. Currently, EIMI operates the country's busiest toll road - the Delhi-Gurgaon Expressway - and will be doing so till December 2015. It will manage three more projects built by DSC in the next one year. "EIMI will be bidding for tier-I (above 50,000 passenger car units) and tier-II (5,000 to 50,000 passenger car units) projects of other developers as well." says Anhad Narula, Director, DSC.

The OM&T services market is expected to rise to around Rs 5,000 crore by 2016, according to Feedback Ventures, an infrastructure services firm. "We offer endto-end services that include a commitment to reduce accidents on the highways and lower waiting time at toll plazas through superior traffic management systems, electronic tolling and better signages," says Parvesh Minocha, Vice Chairman, Feedback Brisa Highways OMT, another new entrant.

According to estimates, infrastructure spending in the 12th Plan (2012-17) could reach Rs 40 trillion, with substantial amount being spent on roads. Clearly, with such an ambitious highway expansion plan on the anvil, the toll business will boom in coming years.

But scaling up rapidly is crucial for the companies to stay afloat, apart from ensuring better tolling. "The mandate is to find the best possible solution for each project whether it is selection of technology providers, manpower or engaging local authorities," sums up Mhaiskar.