The times they are a-changing in the Indian pharma industry. Some of its leading companies, which once prided themselves on their healthy cash surpluses - or at least very low debt - have now embraced debt with open arms. Between 2013/14 and 2015/16, for example, Cipla's net debt (total debt minus cash) rose from Rs 1,072.2 crore to Rs 4,330.4 crore, while Lupin in this period changed from being net cash surplus to posting a net debt of `6339 crore (see The Great Pile-up). Similarly, while in the past drug companies largely pursued organic growth, they are now actively making acquisitions, particularly overseas.

The two trends are connected, in that most of the recent debt has been incurred to fund the acquisitions. In July 2015, for instance, Lupin announced its takeover of US-based Gavis Pharmaceuticals for $890 million. Two months later, in September, Cipla revealed that its UK arm Cipla EU was acquiring two companies in the US, InvaGen Pharmaceuticals Inc. and Exelan Pharmaceuticals Inc. for a total of $550 million. Both acquisitions, funded largely by offshore debt, were completed in the early months of 2016. In October 2016, Ahmedabad-based Intas Pharmaceuticals stated it was acquiring the generics business of Actavis, in the UK and Ireland, through its wholly-owned subsidiary Accord Healthcare, for an enterprise value of 603 million ($768.4 million). "It is being funded entirely by debt," says Nimish Chudgar, CEO and Managing Director, Intas Pharmaceuticals. 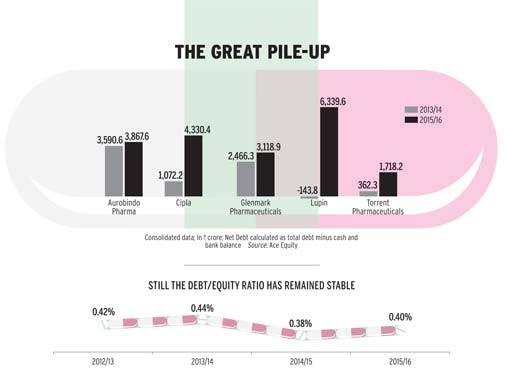 At one stroke, Cipla's acquisitions doubled its US sales from about $200 million to $400 million, adding a host of new generics to its portfolio: drugs used for central nervous system and cardiovascular ailments, various infections, to combat diabetes, and more. InvaGen also provided it a large manufacturing base at Hauppauge, New York, as well as a R&D unit, Cipla's first such in the US. The Gavis acquisition increased Lupin's range in dermatology, controlled substance products and other niche generics in the US market. The UK and Ireland businesses of Actavis were up for grabs following a European Commission (EC) order - after global giant Teva Pharmaceutical Industries took over Allergan Plc's generics business in 2015 - directing that part of the latter's portfolio should be divested as an anti-trust measure. (Allergan was formerly known as Actavis.) Intas's foray makes it a leading player in the UK and Ireland generics markets.

"Pharma companies today are re-evaluating their capital structure and while doing so, very much looking at raising offshore debt," says Kedar Upadhye, global Chief Financial Officer, Cipla. He explains why offshore debt is a much cheaper option than issuing fresh equity. "Funding growth through equity is very costly," he adds. "The cost of equity, in terms of returns expected by shareholders, is typically more than 12-13 per cent, while offshore debt interest rates are in the range of 2-5 per cent." Cipla's long-term debt to buy InvaGen and Exelan would have cost less than 3 per cent. "The cost of funds in the market today, if you talk about a 10-year rate, ranges from half a per cent to close to about 3.5 per cent," Ramesh Swaminathan, Chief Financial Officer, Lupin, told analysts soon after the Gavis deal. Chudgar, though unwilling as yet to share details of the financing since final EC clearance is still awaited, is similarly gung-ho on debt. "If you are sure of your profit and the synergy (of the acquisition), taking on debt is the best option," he says. 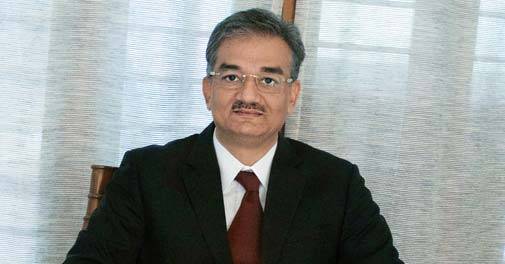 The appetite for debt is not entirely new. Many pharma companies in the past have used foreign currency convertible bonds (FCCBs), but this time it appears more pronounced. Nor is the overall debt by any standards at an alarming level, considering that the debt/equity ratio of pharma companies still remains well below 0.5 (0.38 in 2014/15 and 0.40 in 2015/16), while that of infrastructure companies varies between 2.0 and 4.0. "By and large, the debt/equity ratio in the pharma industry is not as challenging as in the infrastructure sector," says D.G. Shah, Secretary General, Indian Pharmaceutical Alliance. "Leveraging a good acquisition with calculated risk can pay back well. Compared to earlier times, the risk-taking capacity of pharma companies has gone up and, therefore, we are seeing more leveraged buyouts."

Debt makes all the more sense when pharma stocks are none too buoyant and diluting equity is hardly the smart thing to do. The only risk is an unexpected change of government drug policy in the acquired company's country, which could throw repayment calculations out of gear. It happened to Dr. Reddy's Laboratories after its 2006 takeover of German drug company betapharm. Within months of the acquisition, market dynamics in Germany changed with the government altering its procurement policy to a tender-based one for a number of the drugs. This in turn affected the reference prices of these drugs. An effort to move into a new territory turned into a liability for Dr. Reddy's and remained a drag on its balance sheet for many years.

Why this enthusiasm for acquisitions rather than organic growth? There are several reasons. For one, the time taken to bring a product into the market is crucial in the generics business and building a facility from scratch and marketing its products naturally takes a lot more time than doing the same with products from an already existing facility. For another, the run-ins some Indian pharma companies have had with the US Food and Drugs Administration (USFDA) over compliance issues has made the entire industry somewhat wary. The USFDA has periodically banned drug exports to the US from different units in India following inspections, or imposed penalties on some companies. "If some of them had not had regulatory compliance issues, these companies may well have preferred organic growth," says an analyst, who prefers not to be named. In the circumstances, taking over existing units that already comply with the prevailing standards is an easier option than setting up new ones.

For a third, a number of the leading pharma companies already have such huge operations overseas, especially in their biggest market, the US, that it is not always easy for them to post high organic growth on such a large base. Lupin, Sun Pharma and Dr. Reddy's Laboratories have billion-dollar sales in the US, while even companies like Aurobindo Pharma are getting there. (Worldwide revenues of these companies, including Aurobindo and Cipla, are over $2 billion each.) Global pharma leaders, such as Teva and Mylan NV, have taken the same route to growth. Teva, in particular, has made numerous acquisitions in the last 10-15 years. Indian pharma leaders are only following their example.

A fourth reason for acquisitions is the need to expand the product base in the face of increased competition in areas the biggest Indian pharma companies once dominated, leading to pressure on pricing. Relatively smaller companies - both Indian and from other countries, including US - are entering the global market in segments where the biggest players traditionally ruled. The Indian challengers include the likes of Ajanta Pharma, IPCA, Alembic and even Aurobindo. Till about a year ago, there were only three manufacturers of hydroxychloroquine sulphate (HCQS), which is used in the treatment of malaria and rheumatoid arthritis: the US's Mylan and India's Cadila Healthcare and Ranbaxy (since taken over by Sun Pharma). Today there are seven, including two US entrants - Northstar Rx LLC and Prasco Laboratories. Similarly, US-based Taro Pharmaceuticals, which Sun Pharma acquired in 2010, was the sole manufacturer of Nystatin Triamcinolone, an anti-fungal skin cream, but now it faces competition from four others. In some cases, overseas acquisitions - and thereby overseas debt - also stem from keenness to get into new areas or to acquire new technical capabilities. In 2012, for example, Dr. Reddy's Laboratories acquired the Netherlands-based Octoplus NV for its advanced technological prowess in drug delivery. In 2014, Lupin took over another Netherlands-based company, Nanomi BV, for its patented technology platforms to develop complex injectible products. "With the use of Nanomi's proprietary technology platform, Lupin will be able to make significant in-roads into the niche area of complex injectables," Vineeta Gupta, Lupin's CEO, had said at the time. Both these are difficult areas to master, but also have limited competition. Developing them in-house would have taken a very long time.

However, not all the foreign debt taken on by pharma companies has been for acquisitions alone. Glenmark Pharmaceuticals, for instance, has seen its debt rise over time. Between 2013/14 and 2015/16, it increased from Rs 2,466.3 crore to Rs 3,118.9 crore, though it did not make any acquisitions in this period. The loans were taken for greater investment in R&D, which the company expects will pay off in terms of innovation in the long run. Some analysts have expressed reservations about this strategy, since successful innovation can take a long time, but Glenmark is confident. "Despite all the shocks in the global economic environment, our company never stopped investing in R&D," says Glenn Saldanha, Chairman and Managing Director, Glenmark. "It is because of this continuous investment that Glenmark at this point in time has not only achieved the requisite size to gain from economies of scale, but also in a position to grow organically at 15-20 per cent for the next three years."

Most analysts expect the debt- based growth strategy in the pharma industry to continue in coming years. ~