Mumbai-based Jain says Silver Screens, the cineplex he opened in Rajnandgaon, achieves 70 per cent occupancy on most days and also attracts people from nearby villages. This is despite keeping the average ticket price high at Rs100 with premium tickets priced at Rs150.

Inside view of a renovated movie theatre in Surat, Gujarat

Until about a year ago residents of Rajnandgaon town in Chhattisgarh would go to the state capital Raipur, almost 80 km away, to watch a movie. The town with a population of only about two lakh neither had any multiplex nor even a single-screen movie hall. It got its first theatre only in March last year when Sachit Jain, a third-generation film distributor who had ventured into the movie exhibition business, opened a two-screen cineplex in the town. "A two-screen theatre in a place like Rajnandgaon makes good economic sense because, often, two films are released simultaneously or in consecutive weeks," he says.

Mumbai-based Jain says Silver Screens, the cineplex he opened in Rajnandgaon, achieves 70 per cent occupancy on most days and also attracts people from nearby villages. This is despite keeping the average ticket price high at Rs100 with premium tickets priced at Rs150. "In a place like Rajnandgaon, where there are hardly any restaurants or any other form of entertainment, people are willing to spend for the experience they get. We are giving them a multiplex-kind of a feel with two screens," says Jain. A two-screen theatre in a place like Rajnandgaon [in Chhattisgarh] makes good economic sense because, often, two films are released simultaneously or in consecutive weeks: Sachit Jain, Owner, Silver Screens Photo: Rachit Goswami
Apart from Rajnandgaon, Jain also has two-screen cineplexes in Madhya Pradesh's Gondia town and at Dhamtari in Chhattisgarh. He plans to roll out 12 more screens by the end of 2014. Several other theatre chains such as Ranchi-based Eylex Films and Mumbai's Maxus Cinemas as well as Gold Cinema are also setting up two-screen theatres in smaller cities and towns where multiplexes with four to eight screens are not economically viable.

"Investors are capitalising on smaller markets where there is a dearth of good theatres," says Tushar Kulkarni, CEO of Republic Film Company, a movie consultancy firm. "Small cinemas with two screens spread over an area of just 6,000 sq ft have become the norm." What explains the recent interest of theatre chains in smaller markets? Many smaller cities and towns completely missed the multiplex revolution that a large part of urban India experienced starting in the late 1990s when PVR Ltd opened its first multi-screen theatre in New Delhi.

PVR and other major multiplex chains such as Big Cinemas, Inox and Fun Cinemas avoided small towns because investing in theatres with multiple screens was a costly option in places where the audience wasn't ready to pay Rs100 or more to watch a movie and where singlescreen halls offered people a much cheaper alternative. A row of video parlours in Surat. The parlours have been converted into single-or double-screen theatres
Many people also watched movies on pirated video cassettes, as it took almost a month for a film to be released in smaller towns. "That was the analog era and a distributor had to shell out Rs70,000 to Rs75,000 per print. With costs being so steep, the distributor would make only 30 to 35 prints for the entire country and the prints would take two to three months to reach a small town," says Kulkarni.

The economics of the movie exhibition business started changing from 2005 onwards as digital technology gained popularity.

Companies such as UFO Moviez and Real Image started offering digital technology that brought down the cost to a fifth of analog prints. This enabled distributors to order more prints and showcase films in theatres across the country on the first day of release. "In the past few years films were released both in analog and digital formats, but recent films like Dhoom 3 and Jai Ho were released only in the digital format," says Pankaj Jaysinh, Chief Operating Officer, UFO Moviez.

Digitisation provided a boost to the movie exhibition business not just in the metros but also in smaller cities. A case in point is Surat. The industrial town in Gujarat was famous for its video parlours. These parlours previously made money by showing pirated videos of new films within a week of the release of a film in big cities. Today, these have been converted into theatres with one or two screens and show movies with digital prints the same day the films are released across the country. This has helped them earn higher income. The price of movie tickets has doubled to Rs30. During weekends, prices go up to Rs50. 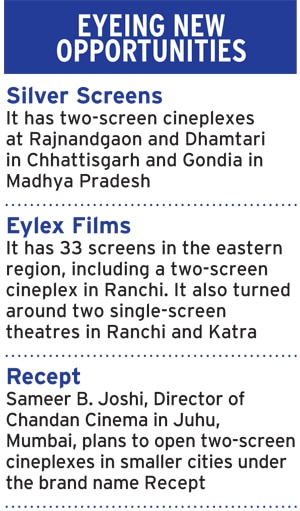 Companies such as Silver Screens and Eylex have seized the opportunity with both hands. While these companies are mostly setting up two-screen cineplexes in small towns, many of them are also reviving single-screen theatres from the brink of bankruptcy.

Eylex, for instance, acquired one single-screen theatre each in Jharkhand's capital Ranchi and Katra in Jammu and Kashmir. The company renovated the two lossmaking theatres and doubled the average ticket price to Rs40, with the most premium offering priced at Rs140. It also reduced the number of seats in its single-screen cinema in Ranchi to 530 from 800 as part of efforts to make it profitable. "The theatres, which made just Rs1 lakh a month earlier, are now earning Rs25 lakh per month," says Anand Lohia, Director at Eylex. The company, which has 33 screens in the eastern region, also has a two-screen cineplex in Ranchi. Lohia says the occupancy level at its two theatres in Ranchi is about 55 per cent compared with 30 per cent for multiplexes in the city.

{mosimage}The success of companies, including Silver Screens and Eylex, is encouraging many others to change their business models. Sameer B. Joshi, Director of Chandan Cinema in Juhu, Mumbai, says he plans to open two-screen cineplexes in smaller cities under the brand name Recept, though he doesn't see much merit in converting the single-screen Chandan Cinema into a two-screen theatre. Single-screen theatres such as Mangla and Westend in Pune and Sharad Cinema in Mumbai will soon be converted into two-screen cineplexes, says Ramesh Sippy of Raksha Entertainment, a film distribution company.

Sippy, namesake of the famous director who made the blockbuster Sholay in the 1970s, says that as a distributor he would prefer to release his films in a small two-screen cineplex that would give him assured returns rather than go to a rundown, large single-screen cinema hall. "A single-screen theatre with 1,000-odd seats will never be able to get economies of scale," he says. "If a 1,000-seat theatre can be split into two where different content can be shown, it would be more economically viable."