Aadhaar: How the UID project can transform India

While advocates say the UID project is one of the best ways to solve India's problem of delivering governance to 1.2 billion people, critics say it is too ambitious and high-tech for a country where nearly 40 per cent of the population is still officially defined as poor.

Kamla Devi, a 21-year-old from Jharkhand, makes her first financial transaction - a withdrawal of Rs 100 - using Aadhaar. UID will enable rural women to have access to their own earnings, instead of relying on the male head of the household.
Shweta Punj
It is a cold, windy morning in Meru village, in Jharkhand's Hazaribagh district. In the courtyard by the dilapidated library, dozens of locals have gathered, some in their best clothes. Kamla Devi, a slightly built 21-year old, waits to withdraw money, clutching a laminated card that bears her unique identification (UID) or 'Aadhaar' number.

The 'business correspondent' (a bank-appointed agent) punches the number into a hand-held device known as a 'Micro ATM' and scans her fingerprint. Several minutes and two authentication attempts later, Kamla Devi gets her Rs 100. This is the first financial transaction the that she has made in her life. "It is quite simple," she says.

Kamla Devi's transaction should have taken seconds, not minutes.

Ironing out kinks in the world's biggest personal identity project is part of what is going on in Meru. The village, about 100 km from the state capital, Ranchi, is one of the sites for Unique Identification Authority of India's (UIDAI) pilot project to link Aadhaar with payouts under the Mahatma Gandhi National Rural Employment Guarantee Act (MGNREGA).

The UID project evokes reactions ranging from ardent support to cynicism to suspicion. Advocates say it is one of the best ways to solve India's gargantuan problem of delivering governance to 1.2 billion people. Critics say it is too ambitious and high-tech for a country where nearly 40 per cent of the population is still officially defined as poor.

Two significant aspects often get obscured in the debate.

How Aadhar works in money transactions
Click here to Enlarge
One, UID could spur development through entrepreneurial activity, and two, it could empower women. MGNREGA, the flagship welfare scheme of the United Progressive Alliance (UPA) government, has been mired in corruption.

UIDAI chairman Nandan Nilekani says Aadhaar can help ensure the money goes to the people it is meant for. At present, an estimated one-third of Rs 1.5 trillion (a trillion equals 100,000 crore) meant for social sector schemes and subsidies does not reach the poor. Aadhaar could be an effective delivery tool - and much more.

Enterprise Catalyst
The UID project's open architecture lends itself to innovative applications. Besides MGNREGA payments, Aadhaar can be linked to distribution of cooking gas and foodgrain, cash transfers, and identity proof for SIM cards. It has the potential to spur enterprise and consumer applications. 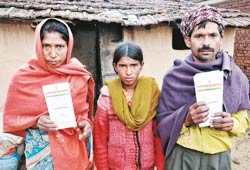 Identity even on the fringes: Baldev Rao and his wife live with their four children in a 350 sq ft hut in Manmadu village, Jharkhand. They go barefoot even in winter. They brew country liquor for a living. Aadhaar is their only proof of identity
For instance, consumer goods companies could design applications to monitor the supply chain and improve connectivity with retailers in rural areas. Services such as insurance would improve, as insurers would have better information about potential customers and be able to offer more competitive rates.

Verification costs of banks, insurance companies and other services will come down. "I call it an app store for development," says Nilekani.

Namrata Kohli, a 2011 graduate of the Indian School of Business, Hyderabad, has drawn up an Aadhaar-based business plan for a software called Vishwaas. "The idea is to facilitate transactions between multiple bank accounts and credit or debit cards," says Kohli.

She says it will eliminate the need to carry multiple cards and remember several passwords. It could facilitate banking and financial services in rural areas, and e-commerce in urban ones.

Pune-based Shardul Lavekar co-founded EasyMontra Technologies with three partners. They have designed a solar-powered device that connects to mobile phones via Bluetooth, and can enable people in rural India to open bank accounts. It will use Aadhaar for identity verification. Everyone included: In the veranda of the library in Meru village, Hazaribagh district, Jharkhand, MGNREGA workers and BPL card holders queue up to withdraw cash
"Right now, we rely on introducers, which adds to operational costs," says the 23-year-old Lavekar. "UID will ease our operations." It is not just start-ups that think so. Shikha Sharma, Managing Director and CEO of Axis Bank, says it will help even large banks such as hers. "The cost of identification is a big challenge," she says.

The Boston Consulting Group (BCG) says in a report on the opportunities in a post-Aadhaar world that the UID project is a mega trend. "The Internet was a mega trend, and in India, urbanisation is a mega trend," says Neeraj Aggarwal, Director.

"Anything that brings fundamental change at different levels - causes companies to rethink the way they do business - is a mega trend."

In a year, UID has created entire ecosystems. Nilekani gives the example of the nationwide network of 70,000 operators who are enrolling residents for numbers. He also points out that biometric devices are now an industry. As a result, the price of iris scanners, for instance, has reduced. Mobile phone maker Nokia has developed a handset with an in-built fingerprint scanner, so that even a phone can be used for authentication.

"The UID database could help services improve their last-mile delivery," says technology expert Lax Gopisetty, who is also Practice Sales Manager at Infosys. Since it is technology-driven, he adds, UID will leave little room for malfunction and manipulation. Cheaper transactions: MGNREGA worker Chameli Devi, a widow with three children, earns Rs 3,000 in a good month. She had to forgo a day's work and spend Rs 8 to get her money from the post offi ce. Aadhaar saves on transaction costs
Inclusion and mobility
In India, men often manage financial resources that belong to women. By requiring the woman's presence, Aadhaar helps her exercise her right and empowers women such as Kamla Devi in Meru to have direct access to the money they earn. Another Meru resident, Chameli Devi, says: "We can take our money at our convenience. Earlier, I would spend nearly Rs 8 to go to the post office, and it cost me a day of work. Now I can withdraw as much as I need." Through MGNREGA, she earns about Rs 3,000 in a good month.

Not only does Aadhaar help Meru's women be more independent, it also allows them to save and to provide their children a better education. Another villager, Kiran Devi, says she wants her three children to get Aadhaar numbers. "My sons can go wherever they want to study and work," she says.

Kiran Devi's comment touches on an important aspect of Aadhaar: it will help make education and medical records portable. Schools could use fingerprint scanners to verify students' and teachers' attendance. Hospitals could match medical records of patients in different cities. "It is often not known what a child has been immunised against. UID would reduce this problem."

Political challenges
The magnitude and complexity of Aadhaar elicits a range of reactions. Prime Minister Manmohan Singh has often applauded it as a key UPA project, but rural affairs minister Jairam Ramesh, a sceptic, has challenged Nilekani to prove that it can work in rural areas. 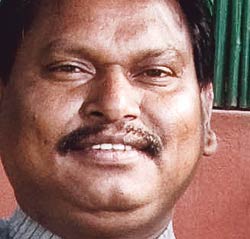 Arjun Munda, Chief Minister, Jharkhand
Indeed, the reason Jharkhand was chosen to testdrive Aadhaar is that it has a champion in Chief Minister Arjun Munda, who belongs to the Bharatiya Janata Party. "With Aadhaar, we can target subsidies," he says.

"If there is one Aadhaar card in a family, we can track its growth." Munda says he wants to connect all social security schemes with Aadhaar, from BPL (below the poverty line) cards to MGNREGA to student stipends.

There are bound to be implementation challenges in a state such as Jharkhand, where some 3.5 million people are below the poverty line and Naxal-affected areas are a few kilometres from Ranchi. In March 2011, Niyamat Ansari, an aide to economist Jean Drze, was murdered after he exposed misappropriation of MGNREGA funds by a district official.

"There are fake muster rolls and money is withdrawn for non-existent workers," says Ajay Kumar Singh, MGNREGA Commissioner, Jharkhand. This is what UID will counter. The Jharkhand pilot project, under way in Chandil, Hazaribagh and Ratu districts, is thus a litmus test.

Far from perfect
Aadhaar advocates like to highlight the reliability of biometrics - fingerprints and iris scans - as one of the project's greatest strengths. But critics question precisely this. Of the six people Business Today observed being identified in Meru village, three had problems with fingerprint authentication.

Repeated attempts produced results in two of these cases, while the third had to be authenticated using old-fashioned paper records. But Nilekani says UIDAI's analysis shows that the accuracy rate is high.

In December 2011, the Parliamentary Standing Committee on Finance asked the government to "reconsider and review" Aadhaar, saying that it did not guarantee beneficiaries of schemes were being correctly identified, that it raised privacy concerns, and that its financial implications had not been studied. On January 27, the Union cabinet finally decided that the Registrar General of India (RGI) and UIDAI would split the collection of biometric data. UIDAI will cover 600 million residents, in addition to 200 million earlier.

The remaining 600 million will be recorded by the RGI, which is part of the Ministry of Home Affairs, through its National Population Register scheme. UIDAI has been asked to review its process to address security issues.

Despite controversies, the bottom line is optimism: people are queuing up for numbers, and companies are participating in pilot projects.

Baldev Rao, a resident of Manmadu village, Ratu district, Jharkhand, says: "We couldn't believe earlier that getting our wages would be this simple." For farm labourer Bhushan Mahto, who is from the same village, Aadhaar equals trust. He says: "My identity will make people trust in me. If I ask for help, I will get it."