Desktops, laptops, netbooks and tablets better watch out. Ultrabook is actually an Intel trademark, to qualify for which the device has to meet stringent standards relating both to its size and nature of the hardware installed.

Nandagopal Rajan
Those shopping lately for laptops will have seen them: larger than netbooks, slimmer than laptops - but costlier than both. These sleek, new devices are called ultrabooks. A host of device manufacturers have lately released them in the market in a bid to arrest the global slide in laptop sales as tablets get more popular. The idea is also to provide a viable Windows option to Apple's MacBook Air, which last year became much more affordable, having cut its price by 25 per cent.

The ultrabook is actually an Intel trademark , to qualify for which the device has to meet stringent standards relating both to its size and nature of the hardware installed. For instance, an ultrabook must be less than 0.8 inch thick. The chipmaker believes it is the future of computing. "These devices will increasingly deliver full performance, built-in security and will be ultra-responsive to the needs of the individual," says Sandeep Aurora, Director, Marketing, Intel South Asia. "It is a response to what is happening in the market." He maintains ultrabooks, which have just hit the market, have enormous scope for innovation in design, user-friendliness, and so on. 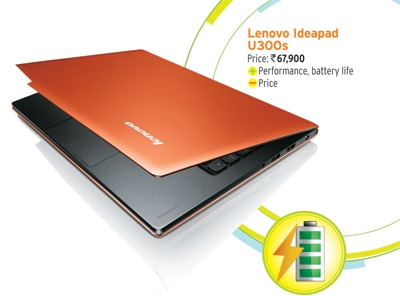 In India, Acer, HP, Dell, Sony and Asus have already launched ultrabooks, while Samsung, LG and some others are expected to do the same by end-March. Since tablets and the MacBook Air are yet to find a mass base here, ultrabooks could well end up competing with netbooks and regular laptops. "We see ultrabooks as an important niche category for those looking for a companion PC device that moves beyond basic computing needs, like browsing, mailing, entertainment and documentation," says Shishir Singh, Director, Product Marketing, Consumer and Small and Medium Businesses, Dell India.

"Customers will increasingly demand thinner and lighter products, without sacrificing performance." Few, however, expect ultrabooks, whose prices range from Rs 45,000 to over Rs 90,000, to pose a serious threat to netbooks and laptops right away. "The prices need to come down if ultrabooks are to have serious impact," says Vishal Tripathi, Principal Research Analyst, Gartner, a technology research firm, predicting the price at which ultrabooks will sell in large numbers will be around Rs 40,000.

Vinay Awasthi, Senior Director, Product and Marketing, HP India, also says ultrabooks will remain a separate segment because of their price. "HP will continue to provide full-featured netbooks and that segment will be priced under Rs 20,000," he says. "The ultrabooks will be available only at prices of Rs 40,000 plus."

So too Acer, the biggest global seller of netbooks, hopes to thrive in both segments. Says S. Rajendran, Chief Marketing Officer, Acer India: "We see continued relevance for netbooks in both the consumer and commercial segments." He expects ultrabooks to boom, contributing up to 20 per cent of the company's notebook sales, but without impacting the sale of netbooks.

Click here to Enlarge
It is not looks alone that ultrabooks are banking on. "The advantage one gets with ultrabooks is in terms of their portability and power," says Tripathi of Gartner. "They also have a battery life of over five hours." Most laptop batteries last at best for two to three hours. But Tripathi also notes the downside of the ultrabook. For one, its storage space is limited. "Apart from the price, it lacks an optical disk drive," he says. For another, its capabilities do not really match those of a full performance personal computer.

Others note that just as the price of ultrabooks from different manufacturers varies widely, so does their battery life, with some ultrabook batteries providing up to 10 hours of power without a recharge, and others failing to meet even Intel's fivehour standard. 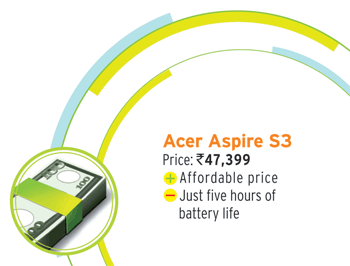 Still there is no doubt that ultrabooks will give some impetus to the overall laptop market. "By most estimates, ultrabooks will be able to reverse the trend (of falling sales) for laptop makers," says G. Rajeev, Senior Market Analyst, Mobile Devices and Tablets, IDC Centre for Consultancy and Research.

As for India, tablets are hardly in the reckoning. "Tablets are at least a year away from making a significant impact in India," he adds. "Apart from the Apple iPad, none in the tablet category has seen any traction."