Carnatic music is a niche art, and its connoisseurs are a small population who cannot afford to pay high ticket prices. Revenues are not easy to come by. The festival is sustained by sponsors who are more kind-hearted than mileage-seeking.

A concert by sisters Ranjani and Gayatri, organised by the Music Academy in Chennai.
N. Madhavan
How does Chennai do it? More than 3,000 South Indian classical music concerts, organised by 135 cultural associations, featuring 1,000 artists, all in a month. At the heart of it is an innovative financial model, which makes the Chennai Music Festival one of the largest classical music fetes in the world. As former West Bengal governor Gopalkrishna Gandhi wrote in a recent newspaper article: "Nowhere in the world, I should imagine, is there anything like Chennai's music season.

December for Chennai means Carnatic music and classical dance. The season is… a huge enfranchising of the highest classicism."

The event is held in the Tamil month of Margazhi (December 15 to January 15), though of late it has extended a bit longer. It helps the cultural associations, called sabhas, to raise funds to promote classical music for the rest of the season.

"Our institution raises about Rs 2 crore from the music festival, which is the bulk of our annual revenue," says N. Murali, president of the Music Academy, one of Chennai's most prestigious institutions, set up in 1928. "We make a good surplus, which is then ploughed back into the trust."

Revenues are not easy to come by. Carnatic music is a niche art, and its connoisseurs are a small population who cannot afford to pay high ticket prices. The festival is sustained by sponsors who are more kind-hearted than mileage-seeking.

"We understand that Carnatic music - or, for that matter, any classical form of music - cannot be made into a sustainable proposition," says R. Thiagarajan, Chairman, Shriram Group. "Like temples and art, it needs to be preserved. Without support it cannot survive." His organisation is one of the largest supporters of the festival.

The sponsorship model is innovative. As events generally offer a sponsor little possibility for brand promotion - audiences are small, and a good proportion is senior citizens - they sign up several sponsors, each of whom puts in a relatively small sum of money. Music Academy, for instance, has 125 sponsors: 15 major sponsors who pay Rs 15 lakh each, and a number of daily sponsors who shell out Rs 45,000 each. "This way, the responsibility is shared," says Murali.

On a typical day during the festival, each sabha holds up to five concerts. Morning recitals are reserved for veteran musicians, while afternoon sessions are for upcoming ones. These are all free to the public. In the late afternoon and evening are the prime-time concerts. These feature popular names, and are ticketed events.

"By this system, established artistes cross-subsidise others and help in the identification of new talent," says Nalli Kuppuswamy Chetti, president of the 112-year-old Sri Partha Sarathy Sabha. 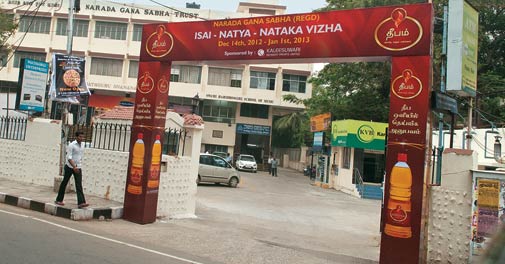 With the help of big and small sponsorships, the festival raises money for the whole season
Shriram Group's Thiagarajan adds: "For an art to be preserved, you need at least 20 talented practitioners. The music festival helps us identify young talent."

Acclaimed singer T.N. Seshagopalan was first spotted at the festival in 1970 by the great violinist and singer Lalgudi Jayaraman. Performing at the music festival is a must for any young musician who hopes to make a career of Carnatic music. "His career will not go where it ought to if he is not accepted by Chennai and at the festival," says R. Sridhar, Managing Director and CEO of Shriram Capital.

This is why artistes make it a point to perform at the festival regardless of how much they are paid. But Chennai isn't their only opportunity: they can earn money by performing at international Carnatic music festivals in Australia, North America, Singapore and South Africa. The second largest such festival after Chennai is held in Cleveland, Ohio, says Music Academy's Murali. "The 10-day festival in early April, involving 120 musicians, has been happening for 35 years," he adds. This allows artistes to earn a reasonable income.

Carnatic music needs to be preserved. Without support, it cannot survive: R. Thiagarajan
"If you do not ensure a decent standard of living for Carnatic musicians, no youngster will take to this form of music," says Thiagarajan. Challenges remain. The average age of the audience continues to be on the higher side. "We need to tackle this issue sooner rather than later," says Murali.

Efforts are on to introduce Carnatic music in school curricula, as it is difficult to appreciate if one does not understand it. In the past, Carnatic music was commonly taught in South Indian homes, but with increasing competition from other musical genres, things have changed.

Promoters of Carnatic music are using technology to reach out to a larger audience, especially outside India. Websites and phone apps are an easier way for people to check programme schedules than poring over various newspapers to figure out where one's favourite musicians are performing.

Shriram Capital's Sridhar, an ardent music lover who has been travelling from Mumbai for the last 26 years to attend Chennai's music festival, says: "We need to ask ourselves if the current model needs to change to reach out to youngsters.

Should the event be webcast?" While inaugurating the festival in December, Tamil Nadu Chief Minister J. Jayalalithaa, too, mooted the idea of a global Carnatic music festival in December every year, and offered full government support. That could be yet another way for the centuries-old musical tradition to keep up with the times.