Resentment is rife among the Uttar Pradesh voters over the mismanagement of government schemes and widespread corruption in the last five years.

Manu Kaushik
When the residents of Lala Mau Mawai, a village 60 km northwest of Lucknow, learnt in January last year that Chief Minister Mayawati would be visiting them soon, they got busy. Theirs was an 'Ambedkar village', or one of the 19,000-plus villages in Uttar Pradesh selected for rapid, integrated development under the Dr Ambedkar Gram Vikas Yojna - the flagship welfare scheme of the state government. Begun in 1991, the scheme is aimed at villages where more than half of the residents are Dalits, or belong to scheduled castes. The scheme gained traction only after Mayawati became chief minister for the first time in 1995. She set up a separate department in the rural development ministry to run it and has pursued it vigorously during each of her four stints as chief minister. 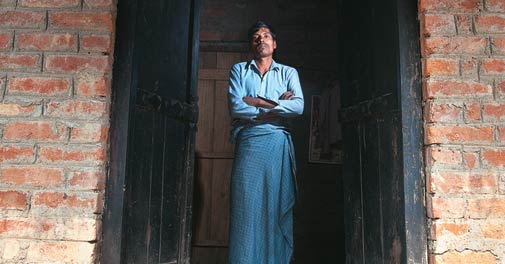 Ram Prakash was among those who inscribed the problems of Lala Mau Mawai on its walls. He went into hiding when the police came for him.
Despite this, Lala Mau Mawai, included in the select band of villages from January 2010, had seen little change. The angry among the village's 700 residents decided - fearing the officials accompanying Mayawati might prevent them from speaking freely to her - to scrawl their complaints over every village wall so that she just could not miss them. What followed? Local officials embarrassed by the graffiti quietly deleted Lala Mau Mawai from the list of villages Mayawati was to visit. The chief minister never came, but the police began to harass those who had planned the unique protest.

One of them was Ram Prakash, a farm labourer, who had to stay away from home for days to elude the police. "They threatened my family with dire consequences," he says. "Given the wretched lives we lead, how could they have made things worse?" He holds forth eloquently on the quality of life in the village. "None of the houses has electricity," he says. "We have no water for irrigation. The nearest health centre is 10 km away. We were promised one in the village, but it was never set up. Local officials never listen to us. Whenever we want anything done, they ask for bribes. There are schemes to help people like us, but corruption and inefficiency have ruined them."

It is a similar story in many other Ambedkar villages: acute water shortage, frequent power cuts, dilapidated roads. In 2009,Mayawati herself acknowledged the scheme had not met her expectations, and directed government officials not to select any more villages that year, but instead to use the funds earmarked to improve the ones already chosen. 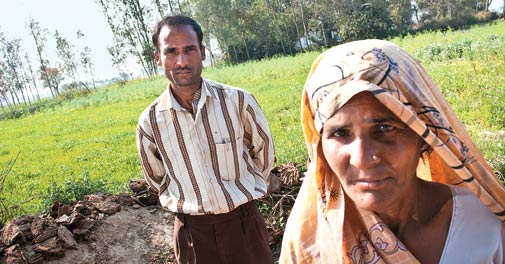 Raju, MGNREGS labourer in Sakhan Rajputan village, with his mother. He has to wait endlessly for his payment
Other welfare schemes, including Central ones such as the Mahatma Gandhi National Rural Employment Guarantee Scheme (MGNREGS), have hardly fared better. "Under the MGNREGS we are supposed to get our payment within 15 days of work. But often we are paid after three to four months, and that too less than the full amount due to us," says Raju, a resident of Sakhan Rajputan village in Unnao district, 65 km from Lucknow. Raju, who has enrolled with the MGNREGS for the last three years, discovered last year that two job cards had been issued in his name. "The muster roll is never brought to the work site to mark our attendance," he says. "This allows officials to inflate the number of workers at the site and siphon off money. I have complained to the block development office many times, but no one listens."

The biggest scam during Mayawati's rule, of course, has been the misuse of National Rural Health Mission (NRHM) funds allotted to the state, which the Comptroller and Auditor General's preliminary findings in October last year estimated at around Rs 5,000 crore, and which the Central Bureau of Investigation is still probing. The case has taken sinister turns with five people, including two chief medical officers of the state, who were allegedly involved, being murdered or dying mysteriously. Again, a separate audit by the Union Health Ministry in July last year found the state health ministry had bought 779 ambulances at a cost of Rs 54.56 crore using NRHM funds, but 620 of them remained parked in the manufacturer's yard. 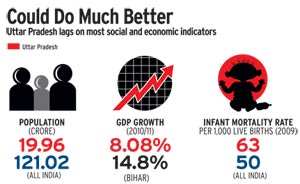 Click here to Enlarge
What does this mean on the ground? Take the community health centre at Bharawan village of Hardoi district, in Sandila assembly constituency, 60 km north of Lucknow, which covers nearly 300 villages. It ought to have four specialist doctors - in medicine, surgery, paediatrics and gynaecology - 30 beds, as well as an operation theatre, a labour room, an X-ray machine, a pathology laboratory and an ambulance. It has just two general physicians, six beds and virtually none of the other facilities. It helps deliver around 200 babies each month. "When the number of pregnant women exceeds the number of beds, we tell the families to either go away or to occupy any space they can find on the premises," says Dr Sushil Kumar, who heads the centre. "If any of these are emergency cases we refer them to the nearest other facility available - a community centre, which is 20 km away. We have no ambulance, so the families have to use private vehicles to get there."

As assembly elections drew close - the state's 403 constituencies went to the polls in seven phases through February - Mayawati did try to salvage the situation. In the last seven months, she has sacked 21 of her ministers, five of them after they faced criminal charges. Sixteen were removed after the poll dates were announced. But is it a case of too little, too late? "The state government is completely disconnected from the people," says Ajit Singh, Civil Aviation Minister and chief of the Rashtriya Lok Dal, which is contesting 46 seats, most of them in Western UP.

However, that may be too sweeping a judgment. Mayawati inherited a mess when she took over in 2007. The law and order under her predecessor, Mulayam Singh Yadav, was in poor shape, the economy at a crawl. Gross domestic product (GDP) growth averaged around five per cent annually in the first half of the last decade. "Except for passing the Fiscal Responsibility and Budget Management Act in 2004 which improved the fiscal indicators, the Mulayam government did little to attract investments," says Ajit Kumar Singh, Director, Giri Institute of Development Studies (GIDS), Lucknow.

Law and order, most maintain, has improved, while the GDP growth was a respectable 8.04 per cent in 2010/11, against the all India figure of 8.4 per cent. "We've worked at the ground level," says Abdul Mannan, Sandila's sitting MLA, who was formerly Science and Technology Minister in Mayawati's Cabinet. On health care too, he insists the situation is better than before. "Almost 90 per cent of our people are covered by the state's medical facilities." On power cuts, he advises patience. "Power-related initiatives in the state were taken up only in the past five years," he says. "From 5,700 megawatts (MW) in 2007, we are now producing 8,900 MW." The Bahujan Samaj Party (BSP) government has also raised minimum wages for rural workers from Rs 62 to Rs 100 per day. 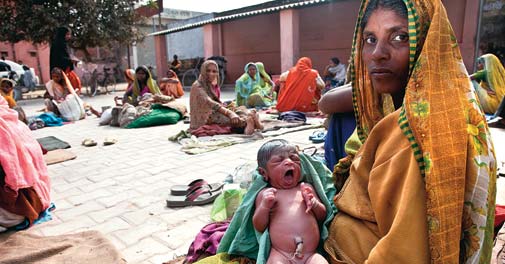 State of neglect: A woman having given birth just two hours ago, sitting outside the health centre at Bharawan village, central UP
Sugarcane growers are happy with the government too. Rakesh Sharma, who grows sugarcane on his 18.7 acre farm in Shamli, in Prabudh Nagar district of Western UP, commends Mayawati for setting the state administered price (SAP) for sugarcane - the minimum price at which state sugar mills can buy from growers like him - at Rs 240 per quintal for the current financial year, far above the fair and remunerative price (FRP) of Rs 145 a quintal set by the Centre. "The state government understands our situation much better than the Centre," he says. "Our per quintal cost is around Rs 180. How can we sell at FRP rates?" While the farmers rejoiced, sugar mill owners were so riled that the Eastern UP Sugar Mills Association contested the price in the Allahabad High Court, calling it "unreasonably high". On February 10, however, the court ruled that the SAP was "neither excessive nor unreasonable".

Overall, the state's performance on social and economic parameters has shown no dramatic changes during Mayawati's rule.

Over six years from 2004/05 to 2010/11 - which includes three years of Mulayam Singh Yadav's regime - UP's average GDP growth rate was 7.01 per cent, according to Planning Commission data. During the same period, similarly 'backward' states like Bihar averaged 10.9 per cent growth, Orissa 9.47 per cent and Jharkhand 9.45 per cent. For three consecutive years during this period, the overall Indian economy grew at more than nine per cent. "Actual conditions at the grassroots have not improved," says Singh of GIDS, "To an extent, the increase in public investment and agricultural output have helped UP's growth. But largely the overall growth in the country was a big pull factor for the state economy."

{mosimage}Badri Narayan Tiwari, social historian and anthropologist at Allahabad's G.B. Pant Social Science Institute, agrees. "Barring a few mega projects such as the Yamuna Expressway from Noida to Agra, the Ganga Expressway across the state and some power projects, there has been a complete policy paralysis during Mayawati's tenure," he says. "The misappropriation of funds in the delivery of central schemes has also curtailed development." Mayawati has certainly been generous in providing development funds for her core vote bank of Dalits, who make up a fifth of the state's population, during her government's five-year tenure. The state's Special Component Plan (allocation - funds set aside exclusively for the scheduled castes - increased from Rs 5,329.19 crore in 2007/08 when she took over to Rs 9,722 crore in 2011/12, which is 20 per cent of the state's total plan expenditure for the financial year. This covers the Ambedkar villages as well as numerous other welfare programmes aimed at the Dalits. Though questions have been raised about how much of this largesse actually reached poor Dalits, this core is expected to remain loyal to her. But how the remaining four-fifths will vote is the question.

Mayawati won the last Assembly election in 2007, partly due to the voter's exasperation with the poor law and order situation in the Yadav regime. And partly because of the broad coalition her party forged with groups which had traditionally stayed away from it: the Brahmins and other upper castes, sections of the Muslims and the extremely backward castes. Will Mayawati retain the loyalties of these other groups this time round? "The BSP is likely to get seats only where its candidates have strong local connections and in Dalit-dominated areas," says historian Tiwari.