Movies may be the biggest part of UTV’s portfolio, but founder-chairman & CEO Ronnie Screwvala has also turned the spotlight on television, gaming and the digital medium. Screwvala has believed in multiple revenue streams and is close to achieving his goal of making UTV a 360 degree media company even as it grows at 100 per cent a year, reports Anusha Subramanian. 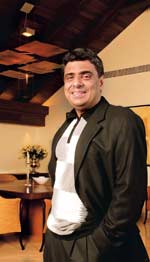 Ronnie Screwvala
For Ronnie Screwvala, Founder-Chairman & CEO of UTV, work matters more than words. So, earlier this month, when a leading US-based lifestyle magazine named him one of the 75 most influential men of the 21st century, Screwvala did not throw a big bash.

The pioneer of Indian media (cable TV company, 1981; daily soaps, 1994 and so on), was probably planning the deployment of the Rs 900-crore-plus that The Walt Disney Company has invested this February in the UTV group. Or maybe, he was working on strategies for interactive gaming (he has just completed three acquisitions), TV content (making a comeback), broadcasting (great start with Bindaas), and new media like the Internet and digital (Big competition looming).

An affable but shrewd businessman, Screwvala has always believed in multiple revenue streams and is close to achieving his goal of making UTV a 360 degree media company even as it grows at 100 per cent a year.

In recent times, his biggest achievement was in getting Walt Disney to pick up a 15 per cent stake in UTV Global Broadcasting for Rs 119 crore. Earlier, Disney had acquired 32.1 per cent in parent UTV Software Communications for Rs 805 crore. Screwvala expects Disney’s entry to power UTV’s growth across verticals. “In all our five verticals, we are looking at a strong association with Disney. We will co-produce movies, we will look at local coproductions for the domestic market, we could even look at their distribution in India,” says Screwvala. “In broadcasting, combining our five channels and Disney’s three channels, we could look at a common distribution platform, common airtime sales and cross-promotions of our channels.” 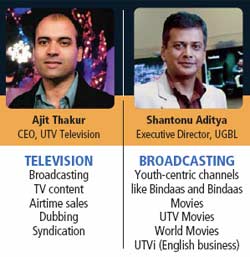 Click here to Enlarge
Screwvala says he is looking at UTV afresh. “We have an integrated model and we have demonstrated our capabilities in moving seamlessly from one vertical to another with great success. Secondly, unlike the other large integrated media players, our origin has been primarily content and not broadcasting.” 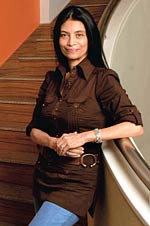 Zarina Mehta
Ritesh Poladia, Media Analyst with Dolat Capital, says: “UTV has a very robust business model… high risk but high rewards, as well.” According to Screwvala, what sets UTV apart is the fact that it is five years ahead of any other Indian media company in India because of its business model. “We have seamlessly moved up the value chain and phased out our outsourced service businesses… and now want to be in control of all our businesses,” he explains. But cash-rich players like Anil Ambani’s BIG are moving fast across segments, while foreign giants like Viacom are also elbowing into the market on the back of locals. So, how are UTV’s verticals doing?

UTV Motion Pictures
The movie production business has been UTV’s cash cow so far, having evolved from a mere distribution set-up into a scalable and profitable model. The movie segment’s revenues grew 236 per cent during the year to March 31, 2008—from Rs 72 crore in 2006-07 to Rs 242 crore. Screwvala expects this business to account for 40 per cent of UTV’s top line in the current financial year. Siddharth Roy Kapur, CEO, UTV Motion Pictures (UMP), says: “We initially started off as a distribution business and then built the studio model. Today, we are a successful studio model.” 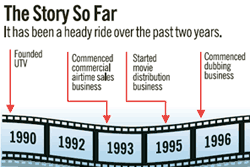 Click here to Enlarge
Considered India’s secondbiggest movie company, UTV spends big on marketing. While Indian producers, typically, set aside 5 per cent of their budget for marketing, it follows international studios with a splurge of 40 per cent on marketing. And like Disney or Warner Brothers, UTV also does its own distribution, so, it can make more daring films and take risks.

What also sets UTV apart from the local competition is international exposure, which has its rewards. The Happening, UTV’s Hollywood project in association with Manoj “Night” Shyamalan, grossed $162 million (Rs 778 crore) at the box office. UTV’s share in the venture is 50 per cent—and it is yet to exploit its home entertainment and satellite rights. It has also signed a $30 million (Rs 144 crore) coproduction deal with Will Smith’s Overbook Entertainment and Sony Pictures Entertainment for two Hollywood films that will be distributed worldwide.

Media analysts are bullish about UTV’s motion picture business and say it has a robust business model that gives it margins of 25-30 per cent. But, given the overall economic scenario, the business could see a slight slowdown.

UTV global broadcasting
“If we have to be a media conglomerate, there is no way we can shy away from the broadcasting business,” says Screwvala. “But we are clear that we are not getting into the crowded general entertainment space.” Says Shantonu Aditya, Executive Director, UTV Global Broadcasting: “UTV has been a strong player in content, and broadcasting is a natural extension.” 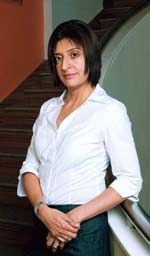 Zarina Mehta, CEO, Bindaas, claims her channel became the #1 youth channel within a year of its launch, and she now plans to take it down south.The two other niche channels are UTV Movies and World Movies. According to Dilshad Master, COO, UTV Entertainment Television, within five weeks of its launch, World Movies was the #3 movie channel and began attracting advertisers.

“We had 25 advertisers on Day 1 and prime time was booked at 80 per cent,” Master says. “We will invest approximately Rs 500 crore in broadcasting over the years… and will break even by 2010 if all goes well,” adds Aditya. However, analysts like Poladia are not ready to buy Aditya’s script fully, citing a challenging external environment that includes high carriage fees (UTV itself is understood to be spending at least Rs 100 crore on this count for its five channels).

UTV television
Screwvala has brought in Ajit Thakur from Hindustan Unilever to head the TV content business, which had lost its way after having led the market up to 2003 when rivals came up with specialised content like soaps, comedies and reality shows. This segment is expected to fetch 21 per cent of total revenues this fiscal. Currently, revenues from the overall TV content segment within the media and entertainment sector are at around Rs 1,000-1,400 crore and this is expected to grow to Rs 3,000 crore over next three years. Thakur is keen on replicating the motion pictures studio model for the TV content business. UTV Television will focus on in-house reality shows, big-scale fiction and joint co-productions.

Click here to Enlarge
Interactive, gaming & net
This is a relatively new business for UTV, and it has grown through acquisitions. In 2007, it bought out UK-based Ignition Entertainment and the India-based Indiagames. Ignition develops and publishes games for leading consoles, whereas Indiagames is a mobile and online gaming player. More recently, the company picked up a majority stake in US-based True Games Interactive.

Screwvala expects this segment to contribute approximately 18 per cent of revenues in the current fiscal. He says Indiagames can contribute Rs 40-50 crore and Ignition Rs 100-110 crore to the top line.

In the Internet and digital segment, UTV is still sifting through technologies and options. “Anything you do now has to sustain itself for the next 15-20 years,” says T.N. Prabhu, CEO, New Media. It will focus on four domains—business and finance (UTVi.com), entertainment, music, and gadgets and consumer electronics.

“We have set aside Rs 120 crore for this space that will be invested over the next three years,” Prabhu says. UTV expects 5-6 per cent of its top line in 2008-09 to come from this segment and breakeven this year.

Analysts say UTV’s presence across many segments de-risks its business model, but it can expect competition as big Indian players seek foreign partners and new markets. Screwvala is not perturbed: “We are not looking at a competitive market because we believe that today everyone is challenged to grow the market… Before we start talking of serious competition we need to first grow the market.”