Blackburn Rovers' relegation from the English Premier League has left Venky's with egg on its face.

Manu Kaushik/Anusha Subramanian/Dearton Thomas Hector
When the referee blew the final whistle at the Ewood Park football stadium on the evening of May 7, he sealed the fate of one of English football's storied clubs. Blackburn Rovers had just been knocked out of the English Premier League (EPL) after losing 1-0 to Wigan Athletic on its home ground in a make or break game.

The 137-year-old club from Blackburn, a small town in the county of Lancashire, northwestern England, had been relegated to the Football League Championship after an 11-year run at the top level. It had lost 23 of its 38 matches during the season, winning only eight and managing to draw seven. The relegation was a huge embarrassment for a club that is one of only five that have won the English Premier League since its inception in 1992. It also has negative implications for its finances.

Blackburn fans, who were hoping for a miracle, were devastated. Laura Moulden, 23, an advertising professional who has not missed a single Blackburn game since she was five years old, says she is angry and worried about the future of her home club. "There has been no communication between the owners and fans." Most fans blame the owners for the club's decline.

The owners in question are the promoters of the Pune-based Venkateshwara Hatcheries Group, which has extensive business interests in India and worldwide. The group, owned by the Rao family, bought Blackburn in November 2010 for 23 million pounds (Rs 166.4 crore) from the Jack Walker Trust. Walker was a popular local businessman who funded Blackburn for years and helped it win the title in 1995.

The deal with his Trust made the Rs 5,000-crore Venkateshwara Hatcheries the first Indian owner of an EPL club. The poultry tycoons hoped to promote their corporate image and flagship Venky's brand through the EPL, which is followed by millions worldwide.

In the previous season, the club had finished in a credible tenth place. After the takeover, however, a downhill slide began. Blackburn ended its first season (2010/11) under Venky's in the 15th place. This year, it was 19th among the 20 EPL teams - the last three teams are relegated. The club will have to finish in the top three of the League Championship to claw back into the EPL.

For Venky's and Chairperson Anuradha Desai, the financial implications of relegation will be a big concern. EPL clubs earn revenue through ticket sales, Premier League central funds, and commercial operations such as sponsorship and merchandise sales. All of these will be affected adversely by relegation.

But there is a safety net to prevent a free fall "These days, clubs get a 48 million pounds parachute to cover their losses," says Arunava Chaudhuri, a football writer and consultant based in Germany. These payments are given by the EPL to relegated teams to compensate for the loss of income from TV rights. "It is paid over four years - 32 million pounds in the first two years, and 16 million pounds in the next two," says Chaudhuri. Click here to Enlarge
"The financial position of the club is not that perilous as Venky's paid off outstanding debt when they acquired it," says Simon Chadwick, Professor of Sports Business Strategy and Marketing at Coventry University. "The club has built some debt this season and may incur more should it choose to buy new players in an attempt to secure an immediate return to the EPL." As of June 2011, Blackburn's net debt stood at 26.3 million pounds (Rs 190.9 crore).

The Raos have been accused of being indifferent to the interests of the club. Wayne Wild, group director of WEC Group, a longstanding sponsor and cofounder of the Blackburn Rovers Supporters' Investment Trust (BRSIT), says that Venky's bought the team to build its brand in the UK and not out of love for the game. "The moment Venky's came in as owners they replaced all the experienced people, including players, with inexperienced people. They sacked (manager) Sam Allardyce and replaced him with first teamcoach Steve Kean, who had earlier never managed a (top level) team," says Wild.

In December last year, former deputy CEO Paul Hunt wrote a letter to the Venky's promoters highlighting a raft of issues and calling for the sacking of Kean. He pointed out that an 800,000 pounds per season deal with apparel maker Umbro was in danger due to the manufacture of Rovers shirts in India. The contract with Umbro disallows this.

Losing that money, he said, would be a massive blow to Venky's, both financially and with regard to the owners' reputation as businesspeople. Hunt left the club after the letter was leaked to the media. It has also been suggested that he was sacked. Venky's officials did not respond to repeated interview requests from BT.

The owners were notorious for not attending matches and for managing the show from India. "They stayed too far away to know what they needed to do to make the club a success," says Chadwick. The English media and fans were particularly upset by the fact that the Rao family did not even bother to watch the crucial match against Wigan. "Anuradha has watched only one match since the takeover," says a source close to Blackburn Rovers, who did not want to be identified. "Soon after Venky's bought the team, Vineeth Rao came on board as a Director. Blackburn fans unhappy with club owners Venky's released a chicken on to the pitch during a match against Wigan on May 7. Blackburn lost and were relegated to the second division
He didn't know much about football and used to ask employees about basic things. He relied on Wikipedia to identify various footballers," says the source cited earlier. BRSIT has launched a campaign to bring Blackburn Rovers into community ownership. Wild and his team are exhorting fans to donate to the cause and have already received 1.5 million pounds in pledges. The Trust is also looking to raise 10-25 million pounds to launch a bid for the team. 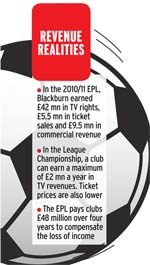 Click here to Enlarge
"Selling the club would be in the interest of Blackburn but Venky's would need to take a cut-price," says Chaudhuri. There are fears that Venky's may sell the good players who are left and exit the business with a profit, though this would put the club's future in greater danger. Congolese defender Chris Samba was sold for a reported 12 million pounds and Phil Jones, another defender, for around 17 million pounds recently. More player sales are expected to follow - star striker Yakubu Aiyegbeni could leave with richer clubs eyeing him.

Venky's, however, has dismissed any talk of selling the club and have told the media that they will "overhaul" the club in the near future. The parachute payments certainly won't do their cause any harm. And in fairness to the owners, it must be said that Blackburn has been relegated from top-flight football many times in its 137-year history, most recently from the EPL in 1999. Each time it has clawed its way back. Someday, the chicken could well come first.