It is precisely this kind of brand loyalty among people in villages and smaller towns that helped TVS XL touch the 10-million sales mark last year, the second two-wheeler brand in India to achieve this milestone (besides Hero Splendor).

Honne Gowda, 43, runs a small provision store in Doddaballapur, an hour's drive from Bangalore. Most people here either depend on farming/dairy or do odd jobs in the country's information technology capital. Every Friday, the store's operations are taken over by Gowda's wife, as he goes to the city for fresh supplies on his trusted steed - a moss green TVS XL. He swears by his slim nine-year-old moped and claims: "It can haul anything I need, from the various daily items I sell to fresh grass bales for the cattle. I have never had any issue with it. What I like most is affordability, low maintenance cost and reasonable mileage. Most houses here have a TVS moped."

It is precisely this kind of brand loyalty among people in villages and smaller towns that helped TVS XL touch the 10-million sales mark last year, the second two-wheeler brand in India to achieve this milestone (besides Hero Splendor). It would not be an exaggeration to say that a very big part of the country's rural economy moves on TVS XL mopeds, as attested by faithful users like Gowda.

However, even in this semi-urban town, there is a clamour for change. Gowda's 16-year-old son Hemant wants an Apache bike for going to college. The father is more intent on the Jupiter scooter. Interestingly, Hemant isn't aware that the high-end Apache bike he wants is made by the same TVS Motor Company (TVSMC) that his father swears by.

It is this ability to appeal across generations and types of users that has made TVSMC stand out in the highly-competitive Indian automobile market with its mopeds, scooters, bikes and auto-rickshaws. This is reflected in the company's financials. Over the past three years, while TVSMC's revenue grew at a compounded annual growth rate (CAGR) of 16.2 per cent, net profit grew at 27.8 per cent CAGR. TVSMC is now India's third-largest two-wheeler player, with around 14 per cent market share. Its stock is trading at its highest levels in the past 15 years.

While at first glance, all this may seem not out of the ordinary, what TVSMC has achieved over the years is pretty impressive if we look at how challenging things were around 2001 when it had just ended its two-decade-old joint venture with Japan's Suzuki. That time, not many competitors, observers and analysts thought it would be able to do well after the break-up. That it thrived is all thanks to the leadership of Venu Srinivasan, the third-generation scion of the storied T.V. Sundaram Iyengar family.

The rise of the TVS Group under Venu Srinivasan's grandfather, T.V. Sundaram Iyengar, who brought the road transport industry to South India, is well chronicled. Slowly, the group expanded into motor industry, auto ancillaries and financial services. While the collective revenue of the TVS Group is in excess of $7 billion, individual companies are run by different branches of the family independently.

But the most interesting journey has been the one undertaken by the two-wheeler business. TVS ventured into the space in 1978 and launched its first moped, the now legendary TVS 50, a couple of years later. In 1982, it joined hands with Suzuki for technology, and in 1984 entered the bike segment.

Ind-Suzuki, as the bikes were branded initially, was a hit in the then-nascent Indian market. However, the dream run was halted by labour trouble. Srinivasan made his mark by taking on the recalcitrant unions and scripting a turnaround in the fortunes of the company, which was re-named as TVS-Suzuki.

Just when things seemed back on track came the rupture in the relationship with Suzuki. The timing could not have been worse. The company was then making only two-stroke vehicles and the market was decidedly shifting towards four-stroke engines, primarily for their higher mileage. With the global partner, which supplied it technology, not around, TVSMC was left to fend for itself.

"We had a long history between 1979 and 2006 in two-stroke technology. Four-stroke was a discontinuous product and there were some challenges related to design, product and service. After we parted with Suzuki, we (independently) designed our first four-stroke bike (Victor). That was our first attempt at design. Some (attempts) did not work, while others were more successful," says Srinivasan, 64, sitting in the first floor of a fairly utilitarian office complex in Chennai, with none of the attendant paraphernalia one encounters while meeting industry chieftains. The only exception are the discreet but ubiquitous security guards in their light blue safari suits.

Srinivasan, obsessed with quality, steered a revolution by emphasising total quality management. TVSMC won the Deming Prize, considered the Nobel Prize in quality, in 2002. If TVSMC products top JD Power quality surveys, it is because of the work done for more than a decade, says Srinivasan. "What you are seeing now is the result of our work over a long time. One of the things we learnt from the Japanese was to focus on the long term, even if it means that people are sceptical in the short term," he says. This is where TVSMC, though listed, enjoys the advantages of being family-run. "Businesses run by families can afford to focus on the long term as they (families) are not incentivised by stock options," he says. He is clear that long term doesn't mean forever but says it helps when one is not fixated on the company's stock price.

"We fight for market share on a daily, weekly, monthly, quarterly basis. After all, long term is made up of several short-term milestones. But long-term objectives are like the pole star on which we are focused," he says.

TVSMC was historically known mainly for its mopeds. What has driven growth over the past few years, however, is scooters and, to some extent, bikes. A recent Motilal Oswal report says that in the first quarter of 2012/13, mopeds accounted for about 39 per cent revenue. In the fourth quarter of 2015/16, this declined to 29 per cent. The contribution of scooters went up from about 22 per cent to 30 per cent during the period. Bikes account for a little over one-third revenue.

Asked about the shrinking moped space, Srinivasan says this mirrors a larger trend in the automobile industry. "If you take cars, sales of very small cars, 800cc, are declining, whereas sales of cars with engine capacity of 1200cc and above are growing. Other categories such as mini-SUV are also growing. Moped is a rural phenomenon. It has declined and will continue to decline. We happen to be there and will continue to be there. If I had to enter afresh, would I do so? I don't know." He says further growth will come from slightly higher-end bikes (150cc and above) rather than 100cc commuter bikes. "The 100-125cc will be occupied by scooters because of urbanisation and improvement in the road infrastructure. High-end motorcycles and scooters will be the future growth areas for the Indian two-wheeler industry."

TVSMC has taken a number of steps over the past three years to strengthen its product portfolio. It launched Jupiter in the fast-growing scooter segment to challenge the dominance of Honda's Activa. In the premium segment, it launched RTR 200 to take on Bajaj's Pulsar range. In the commuter segment, it launched a refreshed Victor.

In 2013, TVS tied up with German major BMW to manufacture the latter's products at its Hosur facility. Apart from the contract manufacturing agreement, the first bike born out of the collaboration between the two companies is likely to be launched under the TVS brand sometime early next year. "I have no comments to offer on that. However, we don't see ourselves making a bike with more than, say, 300-350cc engines," he says.

An industry analyst who did not want to be identified as he is not authorised to speak to the media says the arrangement with BMW will not only provide an additional revenue stream but also give TVS's portfolio of premium products an aspirational value. "An improved product mix with greater emphasis on higher-margin scooters and bikes is what has helped the company do well in the marketplace," he says.

Asked if the company will move towards premiumisation, like some other players, Srinivasan says, "We are back in the commuter segment through Victor. Both premium and commuter plays are doing well. We don't see ourselves only as a premium player." 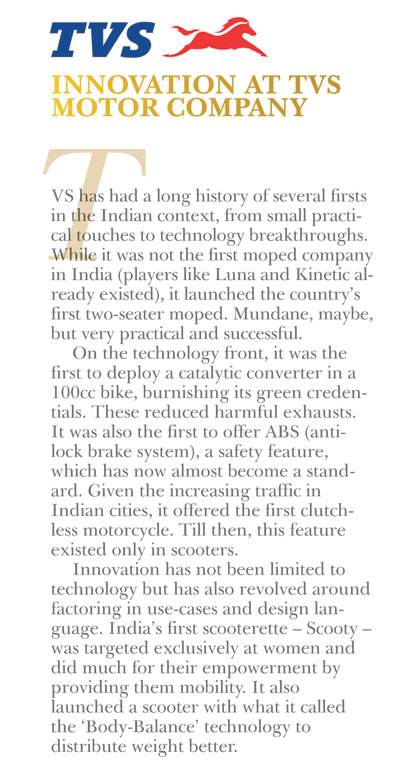 About the flux in the three-wheeler business, Srinivasan says, "One has to realise that it is not the core business. I am happy with the progress, but we can always do better."

The company also has a manufacturing facility in Indonesia and exports to more than 50 countries. It has been affected on the export front of late. "A lot of our exports were to South America and Africa where markets have shrunk due to crash in commodity prices. But I expect things to eventually pick up," he says.

The fourth generation is being trained to take over the mantle. Son Sudarshan Venu, 26, joined as Joint Managing Director a few years ago. Asked if some of the recent successes and cutting-edge designs are a result of the new generation joining the business, Srinivasan says, "Sudarshan is very passionate, very intense and, of course, a part of the success can be attributed to him, though I must point out that we have a strong professional CEO and a very talented team."

Sudarshan led the company's foray into real estate through a subsidiary. Its first two projects sold out in record time and have been delivered. Asked whether this will be eventually made into an independent business, Srinivasan says, "No comments. We have planted a seed. If it does well, we will talk about it in the future."

He is nowadays not involved in day-to-day operations. "I am focused only on three things - technology planning, product development and HR." The only relaxation for him is the work he does through the Srinivasan Services Trust (SST), which works in 4,000 villages, impacting more than 2.5 million people. He says he spends about 30 days a year in villages monitoring the SST's work.

Even as he grooms his son to succeed, he leads TVSMC in battles amid intense competition with global players such as Honda, Yamaha and Suzuki, and local majors Hero, Bajaj and Mahindra. He, though, believes there is space for everybody to do well. "India's two-wheeler penetration is lower than countries such as Indonesia, Thailand and Malaysia. The next 15 years will bring a lot of opportunities."

For now, TVSMC is sitting pretty and getting ready to fight the next battle in its war for market dominance. ~