Why V.G. Siddhartha is increasing his stake in MindTree

The founder of the Cafe Coffee Day chain was one of MindTree's first venture capitalists, buying an initial 6.6 per cent stake in the company for Rs 41 a share in 1999. He now owns 22 per cent stake in MindTree through his companies and personal holdings.

V.G. Siddhartha
Goutam Das/K.R. Balasubramanyam
In 1994, a dinner conversation with Infosys cofounder Nandan Nilekani in Hyderabad had 34-year-old V.G. Siddhartha trying hard to keep a straight face. Nilekani was talking about his vision for Infosys, which had revenues of around $60 million back then. "Nandan said he wanted to turn Infosys into a billion-dollar company in 10 years," recalls Siddhartha, founder of the Cafe Coffee Day chain. He thought Nilekani was being too ambitious.

By 2004, however, Infosys had crossed the billion-dollar mark. Not long after, Nilekani reminded Siddhartha of their dinner-table chat. "Thereafter, I stopped addressing Nandan by his name. I started calling him Guru," says the entrepreneur-investor. Siddhartha had actually made a killing in 1993, buying Infosys' shares at Rs 95 during its initial public offering (IPO) and selling them six months later. But he could have made far, far more. And that was a lesson Siddhartha never forgot. He continued to invest in smaller technology companies and learnt to stay invested, as he has done with Bangalore-based mid-tier IT services company, MindTree.

Siddhartha was one of MindTree's first venture capitalists, buying an initial 6.6 per cent stake in the company for Rs 41 a share in 1999. Over the years, he has earned a compounded annual return of over 25 per cent on his investment. But, while others were exiting the company, he began increasing his stake from June 2011-first buying exiting founderchairman Ashok Soota's holding.

Siddhartha now owns 22 per cent of MindTree, accumulating the stake from the market at prices ranging between Rs 450 and Rs 475 a share. And he is not done. Siddhartha wants to increase his stake in MindTree to 24.5 per cent (beyond 25 per cent he would have to make an open offer under market regulations).

And he has taken a long-term call. "I am committed to staying invested for five to eight years. I believe our new investments too will give us a return of 25 per cent over the next ten years," he explains. 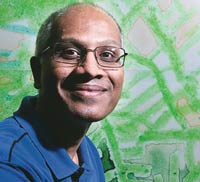 For an organisation, a stable ownership is clearly a huge advantage because, like Hitler learned, you cannot fight a war on many fronts: Rostow Ravanan
That expectation appears farfetched to some. Typically, the maximum gain on an investment is in the early stages. Venture capital firm Walden Software Investments, which also invested in MindTree in 1999, started selling its stake in 2009, and completed its exit this year.

MindTree's Chief Financial Officer Rostow Ravanan is quick to explain that departure. "They exited because their fund came to the end of its life. Walden came in at Rs 40 a share. Their average exit price was Rs 550," he says. "The way they look at it, if they stayed on, it is unlikely they would get 10 times more from here on over the next 10 years."

Siddhartha has other plans."I have no doubt MindTree will touch $1 billion in revenues in the next four to five years and $2 billion in eight to 10 years, with an EBITDA margin of about 18 per cent," he says. That would see its valuation skyrocket. He also expects it to account for one per cent of the turnover of India's outsourcing industry by 2020. "Today, on a valuation of $550 million, my investments are worth about $125 million. Ten years later, they could be worth $700 million." 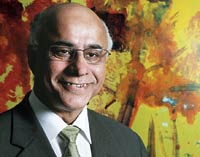 There is clarity on where we need to fix things, whether it is the open space of large deal making, leadership making, or brand, training and development: Subroto Bagchi
The team that will have to deliver that growth is a mix of the company's founders - there are nine, including Chairman Subroto Bagchi and CEO Krishnakumar Natarajan - and high-profile managers plucked in recent months from IT services companies such as Accenture, TCS and outsourcing advisory TPI.

But achieving that growth will be quite a challenge. The outsourcing market has changed significantly from what it was even five years ago. Indian IT firms now face stiff competition from multinationals such as IBM and Accenture, which have a big India presence today. The trend towards protectionism in the US and other markets appears to be favouring the MNCs, since Indian IT companies, caught off guard, have just started building their foreign workforce. 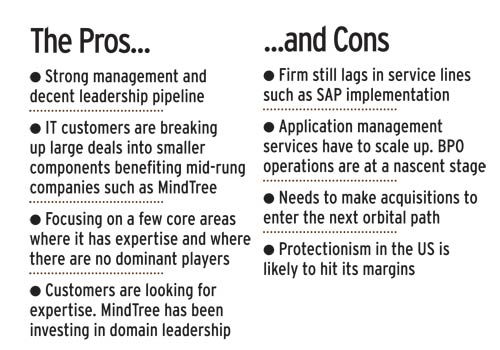 A research analyst with a brokerage house, who did not want to be identified, says that MindTree is a work in progress. The firm has huge gaps to plug, in services such as SAP implementation (SAP is an enterprise software to manage operations) and business process outsourcing. The firm's application management services also lack scale.

In the past, MindTree has made some poor decisions. In September 2009, for instance, the company acquired the Indian arm of Kyocera Wireless for $6 million. It decided to make mobile handsets and market them to telecom service providers such as AT&T in the US. The company grossly underestimated the investment it had to make on such a business and eventually ended up shutting it in late 2010.

Now, given the changing contours of the market, MindTree has restructured itself and is focusing on a few domains where it has built expertise. In IT Services, for instance, from doing a little bit of everything everywhere, the company now focuses only on the manufacturing, travel/transportation and BFSI (banking, financial services and insurance) verticals. Like top-rung companies, it is going after bigger IT deals, with a size of $25 million or more.

Siddhartha, a director, has missed just one board meeting over the years. "At the board level, we really work hard. Whatever inputs I provide during meetings, I provide as a director, not as an investor." He believes the company has shrugged off its mistakes. "In the last five years, we made a few mistakes in forex hedging and going in for handset designing. But we have learnt lessons. You can already see good performance." Still, Sanjeev Hota, analyst with brokerage Sharekhan, says that while MindTree may grow well in the short-term, it will face challenges once it is bigger. "Beyond a billion dollars, it would require much larger management bandwidth. Most midtier firms are finding it difficult to manage their revenue trajectory after reaching this threshold."

The company is trying to prepare for those challenges. "There is clarity on where we need to fix things, whether it is in large deal making, leadership making, or brand, training and development," says Bagchi. "We are breaking away from the industry's herd mentality on how talent development must happen."

MindTree is also going through a rebranding exercise to become better known in other countries and attract foreign talent. The exercise is being spearheaded by Siegel+Gale, a US-based strategic branding firm. While the management is tightlipped about the specifics of the rebranding effort, sources say that to begin with, the company's logo is being redesigned.

The company has also engaged Korn/Ferry, a leadership assessment company, to map its talent. The entire leadership team, including the founders, went through many tests to draw up individual development plans and succession planning. "The firm now knows who is ready for what role, which areas they need to hire and where to change roles," says Indranil Roy, Managing Director, Leadership and Talent Consulting at Korn/Ferry Asia Pacific.

Siddhartha says he has faith in the leadership. "The present team is doing a good job. My investments are safe in their hands." More than anything else, his 22 per cent stake has given the management a degree of operational comfort. With a takeover less likely, the firm is able to focus on its core activities of strategy, selling and leadership development.

"For an organisation, a stable ownership is clearly a huge advantage because, like Hitler learned, you cannot fight a war on many fronts," says CFO Ravanan. "Attracting customers, retaining talent and strategy are daily battles. Then, if you also have to have a boardroom fight and manage investors, it would sap the energy of the leadership team." Since the company's founders hold a 20 per cent stake, the equilibrium has not shifted Siddhartha's way either.

The best part is, they have someone who will stay the course backing them. Siddhartha says nobody has approached him to buy his stake: "People know I would not sell."