In 2007, when his Vishal Retail Ltd made an initial public offer, it was valued at Rs 2,000 crore. Few thought then that the company's rapid growth would not stay permanent, least of all the company's founder.

Ram Chandra Agarwal
Sunny Sen
The polish on the ornate table is chipped, and the upholstery on the chair looks a little ragged.

Ram Chandra Agarwal, Chairman and Managing Director of V2 Retail Ltd, enters the office. Two employees follow him in, carrying jacket samples. Agarwal looks at the jackets, chooses two and asks the men to place orders. The jackets will be sold at his new chain of V2 stores.

"Our selling proposition is good quality at affordable prices," says Agarwal. "The jackets that I just rejected were inexpensive, but the quality was poor."

Agarwal knows his business better than he did a year ago. The worn office furniture is a constant reminder that he is a survivor. An unsuccessful attempt to expand his business cost him what he had built over 24 years. 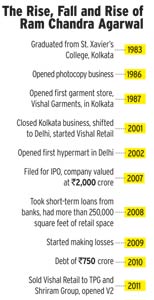 Click here to Enlarge
In 2007, when his previous venture, called Vishal Retail Ltd, made an initial public offer, or IPO, it was valued at Rs 2,000 crore. The media breathlessly reported everything it did, from the IPO to opening outlets in different cities.

By 2008, Vishal Retail had 2,50,000 square feet of retail space and five factories, and Agarwal planned to open more stores. He took short-term loans, though he refuses to say how much. He thought that he would later infuse capital through equity to pay off these loans.

Few thought then that the company's rapid growth would not stay permanent, and Agarwal did not foresee that the economy would nosedive in 2008. But when he wanted to dilute equity, he found that there were no buyers.

"I had become very ambitious then, but now I'm more cautious," says Agarwal. When TPG bought Vishal, it had debts of Rs 750 crore, which the banks restructured after the buyout. In addition, Agarwal owed banks nearly Rs 50 crore, and close to Rs 10 crore to vendors. With the Rs 10 crore to Rs 12 crore of borrowed money that remained, he started his second innings. Like his earlier venture, V2 sells clothes at low prices.

What is different this time is that everything is calculated and modest. Agarwal is not making massive investments. The first store was in Mahipalpur, on the outskirts of Delhi.

"Real estate is cheaper here, and the store is doing pretty well," he says. Agarwal concurs with friends and former colleagues who say that one of the reasons his earlier venture failed was that it could not make a smooth transition from an entrepreneurial set-up to an organisational one.

"There is an optimum way in which a business can be run single-handedly," says Lalit Agarwal, Founder of V-Mart, a retail chain. He worked with Ram Chandra Agarwal from 1999 to 2003, and parted ways because of differences over how the business should be run. A V2 store in Faridabad, Haryana
But V2 Retail has a Chief Executive Officer, who oversees dayto-day operations - Dinesh Malpani, former CEO at Jubilant Retail. Agarwal is also putting information technology, systems and processes in place, which he sees as crucial to efficiency and transparency.

"First we should have management bandwidth, then we can go for expansion," he says. He has also set up a purchase order committee, which vets the quality and prices of goods.

Manmohan Agarwal, who runs online retailer Yebhi.com and worked with Vishal Retail from 2007 to 2009. He says he believes V2 Retail's Agarwal can make it big again.

"Vishal was India's Walmart," he says. "I wouldn't be surprised if he creates such a big company again." V2 has 10 stores at present, and plans to open another five soon. It already has 1,00,000 square feet of retail space and is now planning to venture into cyberspace. Agarwal is preparing to launch an e-commerce platform to boost sales and awareness.

One of the biggest lessons of the Vishal Retail debacle was to avoid manufacturing. When the company was struggling with debt, the first things to be shut down in the business consolidation drive were the factories. But things will be done differently at V2, which currently buys merchandise. "We will outsource manufacturing and control quality," says Agarwal.

Starting all over again has been difficult, he says in his trademark Hinglish. "It has taken a lot of willpower," he adds. In business, he says, he is guided by the the Bhagavad Gita: "Stay detached emotionally, but work with passion."