After seeing volumes growth crash in 2015/16 despite higher ad spends, 2016/17 is looking good for FMCG companies.

Despite being hammered by a slowdown in consumer demand, fast-moving consumer goods (FMCG) companies had stepped up their advertisement and sales promotion expenses in 2015/16. An aggregate analysis of 38 FMCG companies shows six percentage point growth in ad and promotional expenses to 12.4 per cent, from 6.0 per cent in 2014/15. Growth in sales turnover, however, fell seven percentage points to 3.3 per cent from 10.2 per cent during the same period. In fact, over a five-year period, the gap between growth in revenue and ad spends widened to 9.1 per cent from 5.9 per cent. "Advertising expenses are within range and this is a sustainable number for Indian companies," says Debashish Mukherjee, Partner, A.T. Kearney, who also heads the Consumer Industries and Retail Products Practice for India and South East Asia. Reflecting the recovery in sentiments, ad and sales promotion expenses as a share of total expenses rose 1.5 per cent between 2012 and 2016. 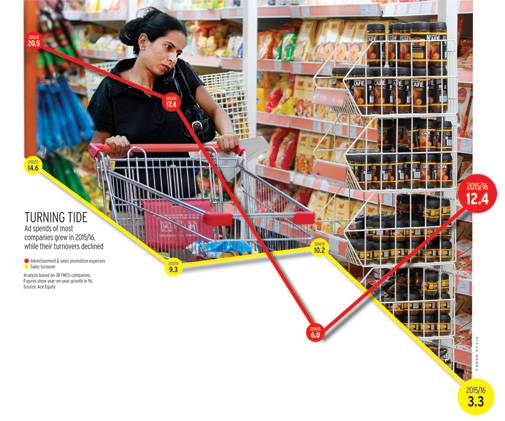 For instance, while Godrej Consumer Products saw 11.8 per cent growth in advertisement and sales promotion expenses in 2015/16, compared to 10.2 per cent growth last fiscal, the sales turnover growth fell to 8.8 per cent from 9.4 per cent during the same period. Similarly, Hindustan Unilever's ad and sales promotional expenses surged to 16.9 per cent from 7.2 per cent, but its sales turnover contracted to 5.2 per cent from 10.7 per cent. "This is a smart move and companies are spending judiciously," says Mukherjee, adding: "Indian companies are growing their spends to create more information and awareness about their brands."

The fall in consumer demand was primarily due to two consecutive years of dry spells. It not only resulted in a decline in foodgrain production to around 5 per cent in 2014/15, but also brought down the average wage in rural India by over 300 basis points over four quarters, affecting 63.5 per cent households whose principal source of income was agriculture. Rural India contributes about 40 per cent to FMCG sales. Of late, however, the rural sector has witnessed signs of a turnaround. According to consumer research company, Kantar Worldpanel India, volume growth in the FMCG category registered 6 per cent growth in the June quarter of 2016, from below 1 per cent growth in the corresponding quarter of 2014. The rural segment, too, witnessed a sharp rise from -7 per cent in the second quarter of 2014 to 9 per cent in the second quarter of 2016 (see Picking Up Pace). "The outlook still remains muted, but there is a sharp rise in growth in the food component of the rural sector, which is driving growth in rural purchases. However, this is more to do with earlier harvests. The increase is seen only in staples and not beyond that. Therefore, the trend is not significant enough yet," says K. Ramakrishnan, General Manager and Country Head, Kantar Worldpanel India.

Decline in commodity prices, however, acted as a cushion for FMCG players during the demand lull.

In fact, the rise in ad spends was possible because of cheap raw material prices, which helped companies improve their gross margins. According to the United Nations Food and Agriculture Organization's food price index, which measures monthly changes in international prices of a food basket, commodity prices declined 29 per cent between 2014/15 and 2015/16. However, the September 2016 data, released recently, showed a reversal in fortunes with the index hitting a high since March 2015. Says Amnish Aggarwal, Senior Research Analyst, Prabhudas Lilladher: "Gross margins were significantly higher due to low raw material prices in 2015/16. In certain cases they moved up by 400-500bps than the normal."

As a result, on an aggregate basis , FMCG companies witnessed around 10 per cent growth in their revenues in 2014/15. But the following year volumes growth contracted with unorganised players cutting product prices to gain market share. "Organised players also cut prices to protect market share loss to smaller players. This pricing impact has softened value growth further," says Aggarwal. The gross margin ratio of the sample companies scaled from 49 per cent in 2011/12 to 53.6 per cent in 2015/16.

Meanwhile, a sectoral shift is on play. "In 2015, e-commerce companies stayed in focus, but in 2016 FMCG companies have been in the limelight (with their promotional expenses). Advertisement expenses of e-commerce players have, in fact, gone down," says Mukherjee.

According to the latest data from Broadcast Audience Research Council India, or BARC, between September 24 and September 30, TV commercials of Patanjali products outnumbered big consumer brands. Patanjali's weekly ad insertions on television stood at 28,949 compared to 20,592 of Lakme, 16,617 for Cadbury and 14,839 for Surf during the period. "Patanjali's impact could be visible in products such as toothpaste, but this trend cannot be extrapolated to other products or categories," says Aggarwal.

The rise in ad and sales promotional expenses by companies was one of the primary results of rising gross margins. But a good monsoon this year has raised expectations of an upturn in consumer demand and agricultural output. So, as and when commodity prices harden, will the bets pay off? Only time will tell.