With indigenous development capability still at the nascent stage, blacklisting the Italian company over alleged kickbacks in the AgustaWestland chopper deal would worsen the steady depletion of foreign sources from which weapons can be bought.

The controversial AW101
Shiv Aroor
In a country that is no newcomer to financial misconduct in military contracts, it is not surprising that the 'choppergate' scandal involving Anglo-Italian helicopter maker AgustaWestland is being likened to Bofors. Things are still in deep turmoil. The government has put on notice the maker of India's new fleet of AW101 helicopters, ordered in February 2010 exclusively for transporting VVIPs such as the Prime Minister, President and visiting heads of state. When things settle down, AgustaWestland and - perhaps more importantly - its Italian parent, Finmeccanica, are likely to be untouchable , as Bofors still is. Bofors is no longer blacklisted but India has not placed any orders with it since 1986, when the Swedish company was named in a high profile paybacks case.

On February 12, Italian police arrested Finmeccanica chairman and chief executive Giuseppe Orsi in Rome following an investigation. Italian prosecutors allege that about 10 per cent of the $750-million deal was used for kickbacks to ensure that AgustaWestland got the contract. Orsi, who headed AgustaWestland at the time of the 12-helicopter deal, denies bribing Indian politicians. India is investigating the deal, and has threatened to cancel it and blacklist Finmeccanica.

On February 19, Finmeccanica issued a statement saying: "Following recent reports concerning the alleged involvement of AgustaWestland, a Finmeccanica Group company, in irregularities relating to a contract for the supply of helicopters to the Indian government, Finmeccanica highlights that it has acted correctly throughout the 40 years it has operated in India, one of the most strategically important markets for the entire group."

The situation is precarious for India - the world's largest importer of every kind of military hardware. The potential black listing of Finmeccanica and its subsidiaries or joint ventures poses a familiar quandary for the country. Firstly, it would worsen the steady depletion of foreign sources from which weapons can be bought, as Finmeccanica would join an off-limits list that includes companies in the Czech Republic, Israel, Russia and South Africa. And secondly, India's armed forces would be - as always - the big losers. 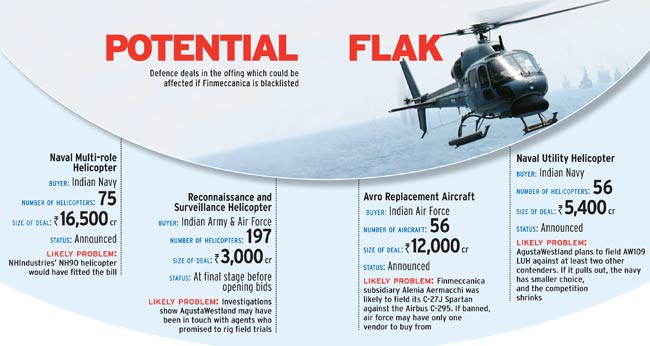 Click here to Enlarge
With indigenous development capability at the nascent stage, the vicious circle of expensive imports feeding corrupt practices continues to turn. Home-grown development programmes that could have precluded imports of the kind currently being made from Finmeccanica and its subsidiaries are delayed and several years from delivering products.

At a quick reckoning, procurement programmes that could potentially be scrapped or delayed by the blackballing of Finmeccanica add up about Rs 57,000 crore. That, in effect, is the amount of business the conglomerate stands to lose in the Indian market in just the next three or four years.

The Indian Navy would be the worst hit. The Ministry of Defence is in the final stage of deciding on a Rs 3,500-crore deal for 16 multi-role helicopters for the navy. One of the finalists in the fray, the NH90 helicopter, is built by a company that is 32 per cent owned by AgustaWestland.

Ironically, AgustaWestland wrote to the ministry early last year, complaining about what it saw as preferential treatment to American rival Sikorsky. An incensed Indian Navy hit back at AgustaWestland, informing the defence ministry that the company had falsified facts. It remains unclear whether the ministry will go ahead with the vitiated competition or call for fresh bids.

The navy has also announced its intention to purchase 75 more similar helicopters in a separate competition. AgustaWestland's untouchability would mean that this competition could end up as an unviable singlevendor situation that no government would push through. 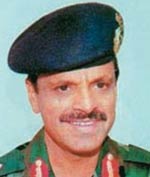 At the rate at which we are blacklisting foreign vendors, there will be nobody left - no company will do business with us. The fallout of this controversy will directly impact national security: Major General (RETD) S.V. Thapliyal
Together, that is Rs 20,000 crore worth of critically required maritime helicopters that are likely to fail to arrive on schedule. The result: the navy will be forced to extend the life of its ageing Westland Sea King fleet.

Two other crucial naval acquisition programmes for 56 light utility helicopters and eight medium-range maritime reconnaissance aircraft - together worth roughly Rs 10,000 crore - could become drastically less competitive. AgustaWestland AW109 was to be a contender for the former requirement, while the ATR-72 MP, built by inmeccanica's 50 per cent joint venture, ATR, is a prospective participant in the latter.

Bribe givers and takers must be punished - there can be no two ways about that. But there must be a critical assessment to make sure that decisions taken do not harm the armed forces and the modernisation process. As things stand ... crucial acquisitions may fall by the wayside." 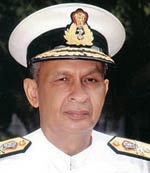 The defence ministry should chart out the potential fall-out of blacklisting a company like Finmeccanica. One should make sure that decisions taken do not harm the armed forces: Vice Admiral (Retd) A.K. Singh
Singh also points out that blacklisting could affect the local production of naval Otobreda 76mm deck guns, under l ic enc e f rom Finmeccanica subsidiary Oto Melara. The company's Otobreda 127/64 lightweight naval gun, under consideration for an Indian Navy requirement of heavy calibre deck guns, could also be dead in the water. A competition to choose a new torpedo could fizzle out, too.

Business Today's sister magazine India Today was the first to report in February that an agonisingly protracted process to choose 197 new light reconnaissance helicopters worth Rs 3,000 crore for the army and air force was to be shelved following irregularities in the selection process.

The last nail in that deal's coffin was the discovery of mysterious documents last year by Italian investigators probing AgustaWestland's alleged middlemen in Italy and Switzerland, suggesting that AgustaWestland - once a contender for the light helicopter contract but since eliminated - may have been in touch with Indian armed forces personnel to swing the deal in its favour. The government doesn't want to touch what's left of the vitiated and tainted deal. "It will die a natural death," says a senior official in the defence ministry's acquisitions wing.

Major General (Retd) S.V. Thapliyal, analyst and former commander of the Trishul Mountain Division in Ladakh, says: "There is massive profligacy in the priorities of defence procurement. Why does the need for VVIP helicopters take precedence over more urgently needed aircraft for the armed forces? The services will be forced to make do with ludicrously old equipment for years. This is a dangerous situation. At the rate at which we are blacklisting foreign vendors, there will be nobody left - no company will do business with us. The fallout of this controversy will directly impact national security." 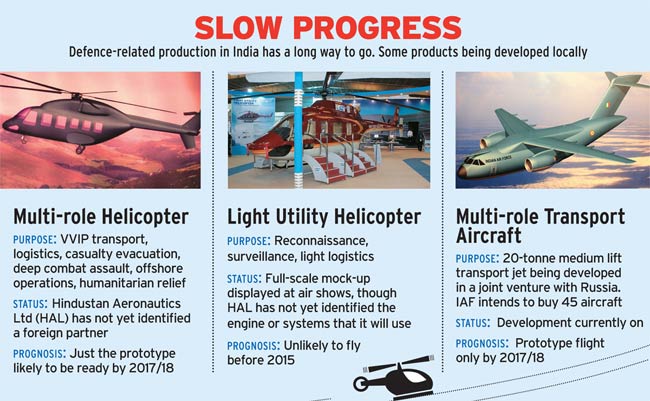 The army, air force and navy will now be forced to stretch the life of their light helicopter fleets of Chetaks and Cheetahs, built by Hindustan Aeronautics Ltd (HAL), Bangalore. The Indian Air Force, which faces the kni fe edge of the AgustaWestland freeze - it took delivery of three AW101 VVIP helicopters in December 2012, which it may end up sending back to Europe - will be affected in other ways too: a Rs 12,000-crore effort to buy new transport aircraft to replace 56 creaky, obsolescent HS-748 Avros could wind up unviable if the government disbars Finmeccanica subsidiary Alenia Aermacchi from fielding its C-27J Spartan as a contender.

The three indigenous programmes that could have preempted the need to import any of the equipment mentioned above, are all largely on the drawing board. Dependence on imported equipment and a staunch refusal to allow Indian private-sector companies, such as the Tata and Mahindra groups and L&T, to lead the production of aircraft, helicopters and advanced defence systems, has ensured that crucial programmes are either in the doldrums or have remained bound in red tape at South Block. These include the Indian Multi-role Helicopter - currently only a drawing on a computer - the Multi-role Transport Aircraft that HAL is developing in a joint venture with Russia, and the Light Utility Helicopter that has so far remained a model fixture at the bi-annual Aero India show.

The writer is a Deputy Editor at Headlines Today