Why Bollywood Lost Out to Movies from the South

With few Bollywood movies making an impact at the cash registers in the last few quarters, the Hindi content factory looks seriously ill compared to movies from the South

Poster of 'The Kashmir Files', one of the biggest grossers of this year

The story of India’s waning single-screen theatres is a dramatic one. What were once architectural heritage establishments—housing close to a thousand cinephiles at a time, who’d often show their admiration by throwing coins at the screen—have now become invisible, rusty structures; almost an eyesore in a cityscape dotted with swanky malls and glitzy multiplexes. Today, at a time when around 150 single-screen theatres are shutting down every year, the Hindi film industry, popularly known as Bollywood, seems to be in the middle of an identity crisis.

As per a recent Ficci-EY report on India’s media and entertainment (M&E) sector, the decline in the revenues of single-screen theatres has been fuelled by their continued shutdown, primarily in the Hindi heartland, while films continue to be made for the upper class/multiplex audiences. This trend has ended up isolating a large chunk of the cinema-hall audience, who are used to paying Rs 50-70 to watch a film in the theatres, experts say. At a multiplex, this cost is three to four times more. The high ticket pricing at multiplexes allows Bollywood movies to earn profits in multiples, thus reducing their dependence on the hinterland audience.

Nearly 40-45 per cent of the lifetime box office collections of hit Bollywood films used to come from non-multiplex zones in India, according to various industry estimates. With single-screens dying and Bollywood’s south Indian counterparts cornering the cash through dubbed versions, Hindi film producers have no other option than to rethink their content and distribution strategy.

Sitting in his seventh floor office in Mumbai’s Andheri West, Pen India Chairman & MD Jayantilal Gada, 60, offers some context: “For the last 10 years, we were building multiplexes, that’s why the films were reflective of that audience. Single-screen films (that target the lowest common denominator) were diminishing, and more multiplex films were being made in Bollywood. They forgot about the single-screen audience.”

While Gada has backed recent hits like Gangubai Kathiawadi and Hindi-dubbed versions of RRR and Vikram, he has also seen losses on films such as Attack, Jersey, Chehre, and Bell Bottom, among others, in the last two years. “Attack clashed with RRR, while Jersey came opposite KGF2. Timing matters a lot. They should have been delayed but our partners had been waiting for two years to release, due to the pandemic,” he adds. On the other hand, those who couldn’t wait, had to go for an OTT release. “Around 20-30 Bollywood films had a digital premiere during the pandemic, and south Indian films didn’t get that chance because OTT platforms preferred Hindi films. Regional films don’t get that kind of premium,” he explains. Gada is right. According to media consulting firm Ormax Media, with few major Hindi releases during the pandemic years, Hindi cinema’s share of box office collections fell from 44 per cent in FY19 to just 27 per cent in FY21. By the time theatres re-opened, there was nothing worthwhile for Bollywood to showcase compared to the south Indian films. Of course, later there were hits like Bhool Bhulaiyaa 2 that raked in Rs 262 crore, says IMDb data, while this year’s biggest Hindi commercial success, The Kashmir Files, made Rs 340 crore, globally.

Experts believe that in the past few years, Bollywood started losing its sheen, with the pandemic only aggravating it. “For many years, Hindi films have gone urbane and elitist. Down South, they tell the same tales in a way that a common man can understand and enjoy them. We really need to learn from them about how not to alienate anybody,” says Akshaye Rathi, Director of Aashirwad Theatres, a Nagpur-based film exhibition and distribution business. He insists that Bollywood stars haven’t marketed themselves well in south Indian markets. “Big studios like Yash Raj Films release their films like Dhoom, Tiger Zinda Hai, etc., in Tamil- and Telugu-dubbed versions. More Hindi film studios need to do it with more consistency,” he adds. 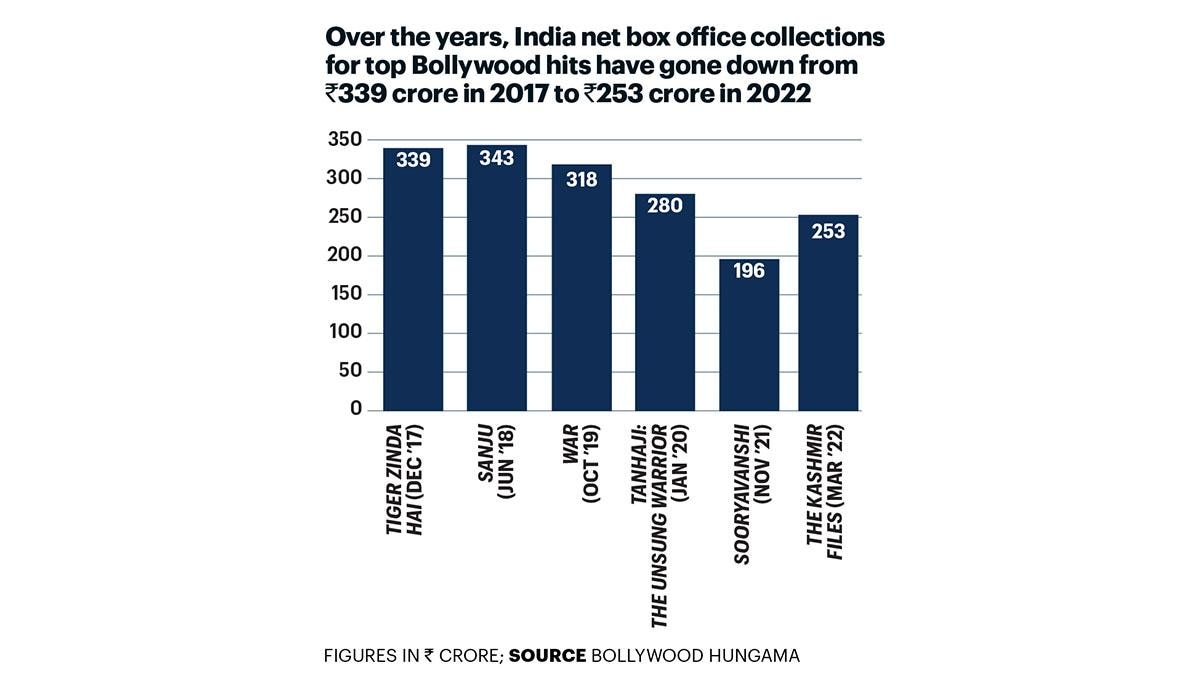 Sanjay Mehta, Proprietor of Bobby Enterprises and distributor of Delhi, UP and east Punjab circuits, explains what has gone wrong. “Hindi films have lost out on the connection with the masses. They were concentrating more on films which were metro-centric, or for the overseas market, because multiplexes bring in more money. Multiplex ticket prices are much higher than at single-screen cinemas. That’s the gap filled in by regional films,” he says.

Mehta is hopeful that upcoming films like Brahmãstra, Laal Singh Chaddha, Raksha Bandhan, and Pathaan, etc., will do well at the box office. “Bollywood now has a better line-up than Covid times, but Hindi films still need to pull up their socks and improve. Special effects of Brahmãstra can be compared to Baahubali or RRR. The North has realised that they need to spend more on quality,” he adds.

Another reason why experts believe Bollywood is ailing, is because of the content. “Historically, Bollywood films have seen decent collections even when the content has been weak given the strong fan following of superstars. That seems to have changed, with content being the primary driver now. Most movies released in the last two-three quarters have gotten mixed to negative critic reviews, indicating that weak content is the primary factor for the poor performance,” says a recent research report by Emkay Global, which tracks the space.

Bhansali Productions CEO Prerna Singh agrees that content needs to be the king. Her latest production, Gangubai Kathiawadi, made Rs 155.5 crore at the box office, nearly half of the Rs 400 crore her last Hindi film Padmaavat earned, according to Sacnilk. “We would have gotten 3-4x more had it not been for the pandemic. The idea of a star has changed. Now the ‘idea’ is the star. You can’t show somebody’s face and expect a hit,” she says.

While there have been some recent hits from Bollywood, there’s quite a gap between the collections of the Hindi-dubbed versions of south Indian films and Bollywood movies, film trade analyst Komal Nahta says. “Bollywood will have to produce 10-12 really good films (and cross the Rs 100-crore revenue mark for medium-budget films, and the Rs 200-300 crore revenue mark for bigger budget films) in the remaining months of the year, to close the gap with what Hindi-dubbed versions of the south Indian films have been collecting,” he says.

Nahta, however, is wary of writing off Bollywood. “The success ratio of Bollywood has always been 18-20 per cent every year,” he says.

PVR Pictures CEO Kamal Gianchandani, too, sees this as nothing but a rough patch. “The reason why it’s getting accentuated is because suddenly a lot of films got bunched up. Pushpa, RRR, KGF, Vikram, etc., released in quick succession. Our business is of hits and misses. In the Hindi [film industry], what has happened is that some of the films that were expected to do well have underwhelmed. But we’re hopeful that this is going to be one of the best years for us, and going forward, there will be a lot of action in making Hindi films bigger in terms of production value,” he says.

All said and done, Bollywood producers are optimistic. “Cinema is a constantly evolving process, and the Bollywood industry is always progressing along with the changing times. Reinvention comes inherently to us. Currently, we see that films are tilting towards an OTT release purely because of budgets. Big-ticket films that are confident of their content, actors and crew, are going for theatrical releases,” says Bhushan Kumar, Chairman and MD of T-Series. His company has produced Bhool Bhulaiyaa 2, one of the highest grossers of this year.

While there will be an audience for massy, upcoming big-budget movies in the theatres, there is a section of the audience that would prefer to watch a movie on OTT. Amit Sharma, MD of cinema chain Miraj Cinemas, says the reason for mediocre/small-budget Hindi films not doing very well is also because of them being released directly to OTTs. “In the last few years, the maximum number of direct-to-OTTs is from Bollywood. Telugu and Tamil films held back their releases for the theatre, and it is paying off in a big way,” he says.

If Bollywood producers and exhibitors are to be believed, then upcoming releases that are expected to perform well at the box office will prove that this was just a dull phase, or as a famous Bollywood flick put it: ‘picture abhi baaki hai, mere dost! [the movie is still not over, my friend]’.