News
Magazine
Features
Will the IPO party fizzle out?

Ashish Sinha (not his real name) is a seasoned stock market investor, who has many a time made, quite literally, a quick buck in the primary market. Recently, Sinha was at it again, when he applied for shares in the initial public offering (IPO) of public sector hydropower major NHPC by borrowing Rs 20 crore from L&T Finance.

Sinha’s game plan is simple: apply for IPOs and dump the stock once it gets listed, invariably at a higher price. Sinha managed to get an allotment of just 1 lakh shares of NHPC at Rs 36 per share; he had an additional cost of Rs 6 per share as interest payment on the borrowed funds. For Sinha, to make a tidy profit on listing, NHPC would have had to open at a substantial premium to the issue price. However, Sinha was in for a rude shock when NHPC did list at a price that was below his cost of acquisition. Result? Sinha lost some Rs 6 lakh after selling three-fourths of the shares allotted to him.

That setback hasn’t deterred Sinha from the primary markets, but he seems to have learnt his lesson. He applied for the IPO of Oil India; only this time he didn’t borrow. At the time of writing, the Oil India issue had just closed. Despite being oversubscribed over 30 times, market players aren’t convinced of a turnaround in IPO returns. “The euphoria seems to be disappearing. Retail and high-net worth individuals did not show much interest in Oil India,” says Arun Kejriwal, Director, KRIS Research, who also has a website ak57.in on the primary market. 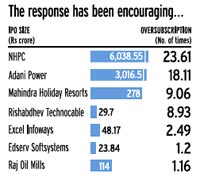 Ever since the first IPO boom in the mid ’90s, the primary markets have always been quick to piggyback on a rally in the secondary market. And this time, too, ever since the benchmark Sensex doubled from its bottom of 8,047 points six months ago, public issues have begun to come back in vogue. This time around, however, the party hasn’t quite begun with a bang, even as some big names have come to Dalal Street—like NHPC and Adani Power, which have together raised close to Rs 10,000 crore.

Whilst both NHPC and Adani Power were oversubscribed handsomely, the disappointment—which investors like Sinha had to face—was at listing. NHPC listed just Rs 3 higher (at Rs 39) and Adani Power Rs 5 higher (at Rs 105). Some smaller issues, like that of Edserv Softsystems, actually listed at a price lower than the offer price. That’s in sharp contrast to the previous IPO boom of 2007, when companies like Edelweiss Capital and Mundra Port got listed at premiums of 75 per cent to their offer price.

The problem this time around, reckon marketmen, is that promoters in tandem with merchant bankers may be pricing their issues a tad too aggressively. And that’s threatening to take the wheels off the IPO bandwagon even as it’s just only begun to roll. “There have hardly been any IPOs so far; a mere hype has been created. It is too early to say that there is a boom in the IPO market,” says Prithvi Haldea, MD, Prime Database, an independent primary market monitoring firm. Indeed, with issues worth some Rs 7,000-8,000 crore in the pipeline, it’s still early evening in the IPO party of 2009.

So, what explains the trend of high oversubscription numbers— NHPC, for instance, received applications worth Rs 1.42 lakh crore (as against the Rs 6,000 crore it eventually raised)—and muted listing returns? Ravi Kapoor, MD & Head (South Asia Capital Markets Origination), Citi, points out that a high oversubscription number is a good indicator of a high listing price, but it is not the only indicator. High costs of borrowing, for instance, can throw a spanner in that correlation. For instance, as Kapoor explains: “The NHPC IPO is trading below the issue price (Rs 34 at the time of writing as against the issue price of Rs 36) mainly due to the leveraging by some investors, whose cost of borrowing was around Rs 9 per share.”

If listing prices have been disappointing, most of the IPO stocks—four of the six since May—have plunged below their issue price. Aggressive pricing—more with an eye on projected future growth than past performance— may be the culprit here. For instance, HDFC Securities was of the view that the Adani Power IPO was stiffly priced vis-a-vis established players in the power sector. A few other brokerages had similar views on NHPC and Mahindra Holiday Resorts. “In some cases, future growth was inbuilt (in the issue price),” says Sanjay Sinha, CEO, DBS Cholamandalam Mutual Fund. He adds that companies and merchant bankers should leave something on the table for investors. Globally, the norm for an IPO is to have a premium of 10-15 per cent to the issue price on listing.

Haldea begs to differ with the theory of aggressive pricing. He says IPOs are not sold; they have to be bought and the proof of acceptance of a price is in the oversubscription. Rather, Haldea says IPOs tend to get listed at a substantial premium only when the secondary market is in a bull run; and there is no convincing bull run at the moment. Others reckon that both investors and promoters have other attractive options for investing and fund raising—nonconvertible debentures, for instance, for investors, and qualified institutional placements (QIPs) for promoters (see The Other Avenues).

So, will the long pipeline of IPOs over the next few quarters—at the time of writing Pipavav Shipyard and Godrej Properties were gearing up to raise Rs 600 crore each— actually materialise? Kapoor is counting on the revival in the secondary markets to bring retail investors back into IPOs. Adds Nikhil Gandhi, Chairman, Pipavav Shipyard: “I’m not concerned with the current state of the IPO market. Pipavav Shipyard is India’s most modern shipyard and has the best facilities.” He may have a good longterm story to tell, but for heavyhitting investors who are looking for that quick buck on Day One, the fundamentals of his shipyard business are almost incidental.