With the World Bank warning India about a potential 'learning crisis', the government is on a war footing to improve education.
Sonal Khetarpal | Print Edition: February 25, 2018 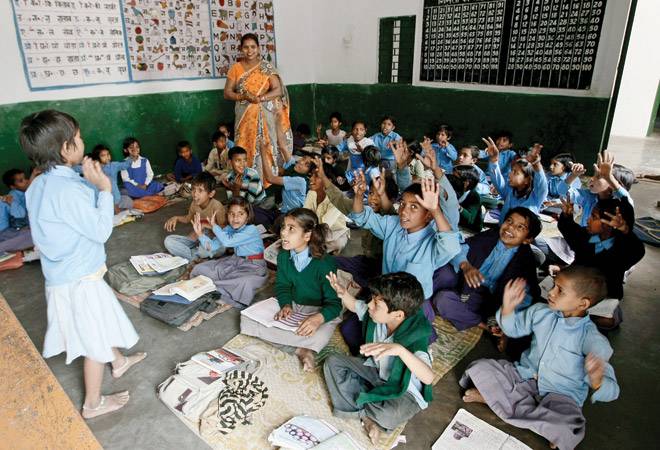 Nearly 60 per cent of government built toilets are unusable because they lack water supply and drainage, says a 2015/16 report by the National Sample Survey Office (NSSO). The situation in the education sector isn't much different. Poor student attendance, teacher absenteeism and inadequate infrastructure are just some of the problems plaguing the sector. A large number of children aged between 14 and 18 only possess grade two level reading skills and "lack foundational skills in reading and arithmetic," said the 2017 Annual Status of Education Report.

Finance Minister Arun Jaitley made it clear right at the beginning of his Budget speech that more resources to improve the quality of education would have to be provided. He spoke of the need to treat the situation "holistically without segmentation from pre-nursery to Class XII".

Classes I to VIII are governed by the Sarva Shiksha Abhiyan (SSA) and Classes IX and X are under the Rashtriya Madhyamik Shiksha Abhiyan (RMSA). Anil Swarup, Secretary, Ministry of Human Resource Development, acknowledged that there are problems co-ordinating with two administrative offices but says a solution has been found. "We are working on a single scheme that will replace SSA, RMSA, and teachers' education, and have already discussed it with state governments."

With 'learning outcomes' (what a child should know at which age) defined, a nation-wide survey assessed over 20 lakh children in classes three, five and eight to determine the on-ground situation and devise a district-specific strategy for pedagogical interventions.

V. Raghunathan, Director, Schulich School of Business, India, said having a single scheme for schools and prioritising improved learning outcomes were steps in the right direction. He added that the real test, however, would not be getting more children into schools, but ensuring they don't drop out.

How the government will measure progress once the new scheme is implemented and ensure a minimum standard quality in education will be crucial. Siddharth Singh, Associate Dean at the Indian School of Business, says the government will need a system of checks and balances with accountability.

Leveraging technology to improve education quality, the government issued GPS-enabled tablets to track teacher and student attendance, monitor mid-day meal data real time, and provide content support to teachers in 50,000 schools in Chhattisgarh. "By March 31, we will have some clarity on how the project is faring. If it works, we will expand it to other states," Swarup said.

Investment focus in public schools will help shift to digital classrooms and enable activity-based learning instead of rote learning, which is especially important in government schools. Technology will bring government school students on par with those in private schools. It will also address the talent shortage that our industry faces, says Anindya Mallick, Partner at Deloitte India.

On the government announcing `1,00,000 crore investment over the next four years for 'Revitalising Infrastructure and Systems in Education', Raghunathan said the scheme - although well-meaning - will have to be broad-based and holistic to have any impact. For instance, almost 70 per cent government schools are in rural areas with serious power shortages.

To improve tribal children's education, the FM proposed an Eklavya Model Residential School by 2022 in each block with over 50 per cent population from the scheduled tribes to provide specialised training for sports, skill development and preservation of local art and culture.

Raghunathan suggests that education in public schools be uniform across regions focussing on narrowing the gap between rural, tribal and urban schools. Swarup, meanwhile, believes that "standards are by and large the same, but there has to be a focus on tribal areas; it is important to keep a separate identity of such schools so a greater focus could be given to them."

The FM has announced plans to train 13 lakh teachers through the online learning portal Diksha. The portal itself will transition from a teacher training and content platform to a data repository. Every teacher's performance will then be tracked with details of how their students fared and suggestions on training programmes will also be made, Swarup said.

Raghunathan and Singh point out that the real challenge will be in implementing these schemes, and monitoring them through various stages and incorporating accountability and enforcement.