Bhoga Ambadas, 39, in the Choutuppal mandal of Nalgonda district, 70 km from Hyderabad, has managed what seasoned businesses would dread to even think of—change the core.

Bhoga Ambadas, 39, in the Choutuppal mandal of Nalgonda district, 70 km from Hyderabad, has managed what seasoned businesses would dread to even think of—change the core. Risking his livelihood, he mustered courage 11 months ago and gave a new spin to his core competence.

The good news: the risk seems to have paid off. A bright blue coloured pushcart full of fancy stuff and cheap trinkets is today fetching him more than the handcrafted Pochampally sarees that he used to weave as a handloom weaver till 11 months ago.

Finding the going as a handloom weaver unsustainable and hit by poor health, Ambadas borrowed and invested Rs 20,000 (including one-time spend on the pushcart) in his new business. “Today, on an average, I get Rs 100 a day against Rs 50-70 that I could manage earlier,’’ says Ambadas, standing with his pushcart on National Highway 9 that passes through Choutuppal as its crowded main road.

Not all handloom weavers like Ambadas have given up yet, but may soon be forced to do so.

A few streets away is Suryapally Mangamma, 39, who is struggling to make both ends meet. “Our revenues have remained the same but the costs have gone up in the last couple of years. We are finding it hard to sustain ourselves,’’ she says. Her husband, Suryapally Shekhar, who was not at home, has been busy exploring other options. “In the last 10 days, he has zeroed in on trading in bricks as a source of additional revenue,’’ she says.

Sample these numbers and the urgency behind this frantic search for an alternate money-making option becomes self-evident. Mangamma, along with her husband, father-in-law and a worker, makes eight sarees in 45 days, which are sold to a local trader for an average Rs 1,200 a piece. That comes to about Rs 9,600. However, the cost of yarn, colours and dyes adds up to Rs 6,825, leaving them with just Rs 1,775 in 45 days. What has worsened the situation for her in the recent years is the machine-made replicas of their products. Says Mangamma: “A silk saree that I sell for Rs 1,200 is also available for just Rs 350 as it is prepared on powerlooms (using an artificial poly yarn).’’

While Mangamma is blissfully unaware of the magnitude of the crisis in handloom, she’s just managed to pin down one of the major reasons for the crisis—the powerlooms. D. Narasimha Reddy, who leads an NGO initiative Centre for Handloom Information and Policy Advocacy (CHIP in quickspeak), supported by the international NGO Oxfam in Andhra Pradesh, says: “We have heard of cases where Kota (a handloom hub in Rajasthan) products are made in powerlooms of UP, sent to Kota and from there distributed all over as Kota handloom products. Similarly, there have been cases of Kerala’s Mundu being made in powerlooms of Tamil Nadu and Orissa’s Sambalpur sarees coming from powerlooms of Andhra Pradesh.’’ 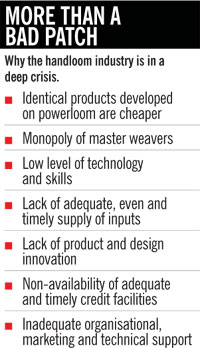 Mangamma is, therefore, not surprised that looms are shutting down in her own village of Samsthan Narayanpuram, where, she says, out of 200 handlooms that were in use some three years ago, only 100 remain operational today. A few locals gauged the trend early on and left the village. A few blocks away lives Emmadi Bhikshapati, 82, whose two sons left for Hyderabad years ago to take up other jobs, leaving him to handle the weaving alone, which with age and failing eyes, he decided to give up last year.

Things are no different in neighbouring regions of Karnataka. A couple of kms off the newly laid six-lane expressway leading to the new Bangalore International Airport, lives B. Ramanjenelu, a 43-year-old master weaver, who operates two hand-run saree units in Yelahanka Old town. In the last three years, he has been forced to cut headcount across his two units from 80 to 25 and stop production on 30 of his 50 looms.

“We have been reduced to an almost hand-to-mouth existence since it takes us up to a week to produce a handloom silk saree and many wholesalers have decided to move to powerloom products,” says Ramanjenelu, a second-generation master weaver who inherited this unit from his father over two decades ago. The reason: Depending on the design, weaving of an handloom saree can take from one day to one week, whereas in powerloom, it would take just two to four hours.

An equally tough challenge is retention of skilled labour. Workers in units like Ramanjenelu’s earn around Rs 500 per saree, while textile mills can pay them twice or thrice of that and also give them more modern working conditions as part of the bargain. “Several more units are in distress, suffering from lack of trained manpower, outdated technology and competition from more efficient powerloom competitors,” says Ramanjenelu. Illiterate and saddled with growing debts, he has few options left. “Banks don’t want to lend money to a sick unit and I don’t have experience in any trade other than perhaps construction work,” he complains.

Ramanjenelu and others of his ilk in Andhra Pradesh and Karnataka are in a deeper crisis compared to their counterparts elsewhere in the country.

As per the Directorate General of Handlooms, there are at present an estimated 23 lakh full-time weavers in the country. Of this, slightly less than half are independent weavers, about 3.4 lakh work under a master weaver and 4.5 lakh are members of co-operatives. D. Narasimha Reddy, retired professor at the University of Hyderabad and handloom sector observer, explains: “It is not the same case everywhere. For instance, handloom weavers in Assam have other sources of income, say farming, but in regions like Andhra and Tamil Nadu, most of the time, weaving is a single occupation.’’

Official estimates, too, paint a dismal picture for these weavers. The annual growth rate in handloom sector has declined from 17 per cent in 1995-96 to 7 per cent in 2006-07 with the dip at its worst (-21 per cent) in 2002-03. That was when the impact of the national textile policy was the most visible. “As per the policy, the hank yarn obligation for spinning mills was reduced from 50 per cent to 40 per cent coupled with decline in budgetary allocation,’’ says CHIP’s Reddy, adding that this, along with poor institutional credit, drove many weavers to suicide in Andhra. Things looked up slightly after the quota system was lifted from January 2005, he adds.

However, some do not find the picture as grim. Talk to Rajat Kumar, the Harvard-returned IAS officer and newly-appointed MD of the apex handloom society in Andhra—APCO (Andhra Pradesh State Handloom Weavers Cooperative Society), which procures products from handloom cooperatives—and he nonchalantly says: “In general, the handloom sector has been adversely affected by expansion of powerlooms and mills, changes in consumer tastes, fluctuations in cotton and silk trade (which supply yarn to handlooms), and domestic and international trade issues.’’

Quoting the state Expert Committee Report of 2005, Kumar says: “Andhra Pradesh has 2.19 lakh looms (apparently one of the highest in the country) and 4.90 lakh weavers. None of the looms operating under APCO has been shut. On the contrary, APCO procurement has increased from Rs 58.72 crore in 2003-04 to Rs 100.09 crore in 2006-07.” However, Kumar is quick to add, “We do not have data about private looms in the state.”

By all accounts, the road ahead for handloom is knotty. As APCO’s Kumar says, the future for the sector lies in increasing the thrust on exports. For this, he plans to engage with the private sector and is evaluating various options that will be finalised before the Christmas season begins abroad.

While the handloom clusters like Pochampally, Dharmavaram, Gadwal, Narayanpet, Madhavaram and Pedena that have somewhat managed to hold their ground, the worst-hit regions of Sircilla (totally dependent on powerlooms hit by low wages), East Godavari, Karimnagar, Chirala and Mangalagiri (dominated by master weavers with very low presence of APCO societies) need urgent intervention.

“The key problem to a large extent with the handlooms is the lack of front-end and marketing,’’ says Harminder P. Sahni, Managing Director, Technopak Advisors, a consulting firm. Getting that in order may well be the way ahead with players like Fabindia and the emerging retail sector.

For its part, APCO is also working on ways to professionalise its marketing by leveraging IT and through computerisation of sales and monitoring.

Undoubtedly, the outcome of such measures matters the most to weavers like Mangamma. It means either taking the Ambadas route or getting to earn enough to see her school-going son fulfil his dream of becoming a'hardware engineer'.