Who is Keki Gharda, and why is he being wooed?

Some of India’s biggest companies - and at least one global buyout firm - have trained their sights on the 80-year-old's chemicals business. 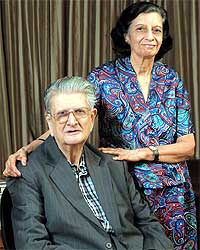 Keki Gharda with his wife

This is the unfinished story of Keki Hormusji Gharda. At the age of 80, this maverick chemical-scientist and entrepreneur is preparing to sell his assets and leave his wealth with a foundation. The Abaan and Keki Gharda Memorial Trust, named after his wife (she is 77) and him has been formed. However, there still is this little matter of selling the company—or 60 per cent of it—and taking care of the legal wrangles with family and business rivals.

Schoolgirl blue—the reddish blue used for school uniforms—was an import from Germany till the late sixties when Keki Gharda looked at the dye that Bayer sold in India. It was a dye no one else had managed to produce or copy. Gharda figured out that the product was actually a mixture—of the dye and a chelating agent that helps the colour stick to the fabric—and not a compound.

In the late sixties when Gharda Chemicals made the dye in India, ‘Gharda Blue’ became a hit as it was better and stronger than the original. “Since I offered the chelating agent separately, the dye’s colouring ability per kilogram became stronger than the original mixture,” Gharda recollects with an impish smile that betrays intense pleasure at having called the bluff of a multinational corporation.

Gharda’s life story is one of such innovations that allowed him to make blockbuster chemicals in India, once they went off-patent. And he made them so cheap that often the original manufacturer was eventually forced to buy from Gharda Chemicals and supply to the world. Today, he supplies Chlorpyrifos, an insecticide, to the Dow Chemical Company, and makes a purer product than Dow ever made—even though Dow scientists had invented it. “Instead of the high-temperature chlorination of pyridine, we use a low temperature process and a pyridine derivative,” Gharda explains.

Gharda is still the Chief Scientist at his company with a 200-strong research team with 15 doctorate degree holders. The company is still working on new products and technologies. Just one such technology in the works has the potential to replace huge blast furnaces in iron and steel-making by burning the lower grade Indian coals in a reactor, and thereby replacing high grade coal imports.

Warning for the bribe tribe